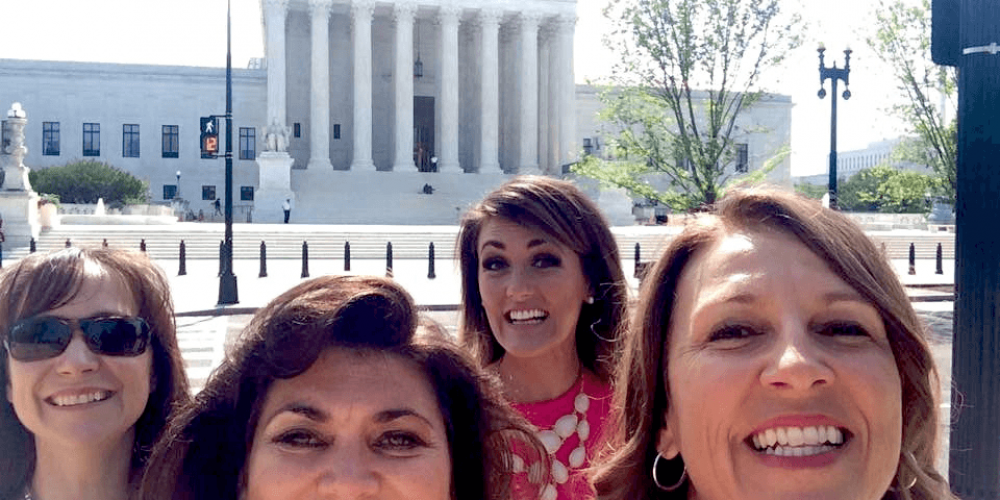 “I had heard about the D.C. Project at the A Girl & A Gun National Conference,” Katy Brown explains. “But I figured someone from other side of state had already volunteered. So I didn’t explore much more about it. But after I got home, I heard they were still looking for someone from Washington (state). I thought, “Wow, what a great opportunity! So I looked at my husband and said, ‘I’m going to Washington D.C.’”

Katy is not a celebrity or a spokesperson. She is not a politician or a lobbyist, but she is one of a group of women gun owners who traveled to Washington D.C. in early July as ambassadors of the field to meet with legislators to highlight the fact that the population of women gun owners is increasing, along with the variety of sports and uses of firearms. Katy lives outside of Spokane, Washington, a state known for its anti-gun climate. Attending the D.C. Project was her opportunity to get involved with something she is passionate about.

Her husband and business partner, Matt, own a gun store in Nine Mile, outside of Spokane. She wasn’t really into guns but wasn’t afraid of them either. It was only about a year and a half ago, after attending Shot Show, she knew she wanted to get more involved. She immediately began taking every training she could, and is now teaching classes. “I taught women only at first because I was intimidated by the idea of teaching men,” she laughs. “But now that I have, the men have all been great.”

“I wanted to get into politics when I was younger but kids changed things for me.” Katy says that she’s not passionate about other political topics, but she is very passionate about firearms. She shared her insights from the D.C. Project experience with us.

“Dianna Mueller was fantastic. I had a meeting with Cathy McMorris Rodgers, but she got called into a vote at the same time as our meeting. I told Dianna, ‘I’m here and I don’t know where I’m going.’ She told me to come on up to her room and we’d figure out a strategy. She hooked me up with some other incredible women who were very supportive.”

“We went to the Everytown rally, not to be disruptive or cause problems but to show some of the misinformation they were giving. One of the pictures I took was of all the armed security with ARs. I found that ironic.”

“I didn’t meet with and senators or congress people, but with staff members from each office, because there was a lot going on at that time. We didn’t plan the rally and D.C. Project because of all the things going on at the time, they just happened to come up then. Some of the women had the opportunity to sit in on congressional hearings, such as FBI Director Comey’s testimony.”

“After their rally I met with other senators and congressmen and women so that I could get a feel of what the meetings were all about. Now I feel that I could meet with Senator Patty Murray and Senator Maria Cantwell, as well as others, and feel much more comfortable.”

Katy was sad that she didn’t get to directly meet with Murray or Cantwell, and there were some D.C. sights she would have liked to see, but she also is excited about some of the other things she got to do. “We got to ride the super-secret train that goes under the capitol,” she laughs. “It was developed for Teddy Roosevelt. It’s quite the ride from one side to the other.” She also appreciated the fabulous dinner provided by the National Shooting Sports Foundation.

Katy says that the most impactful part of the D.C. Project for her was just being in D.C. “There is a different way of doing things and I didn’t realize how things actually work. Doing that was very helpful. And it is also the only place I really encountered a large group of women with no drama and who build each other up. The only other place I had experienced that was with A Girl & A Gun. Not everyone in the D.C. project was in AG & AG, and not everyone was conservative. It was an amazing caliber of women, liberals from California and everything in between. It was a non-partisan group. We could understand and respect each other and even become friends, staying in contact after the event.”

“Although I couldn’t meet with Senator Murray, I was able to meet with her Policy Aid and had a great conversation. He said he would connect me with John, who runs the office in Spokane. I met with him since I’ve been back and took him to the range, taught him about guns, the history of them, and what AR stands for. He really didn’t realize how far back the history goes.”

Katy’s goal from all of this is working to get firearms education back in schools. “There’s a lot of hype and our elected leaders listen to the hype and don’t do their own research. I want to be able to correct that. A lot of people want to meet out of anger, but we want to develop a relationship to be that resource. We believe that because we are coming at it from a different angle we’ll be better received. We just want to be able to sit down and have a cup of coffee and a civil adult conversation, even if at the end of the day we are at opposite ends of the political spectrum.”

Katy’s next step is getting through the “gate keepers,” to meet with the chair of the Judiciary Committee about getting firearms education back in schools. She’s already well on her way thanks to an introductory meeting from John in Senator Murray’s office.

Her final thoughts on the D.C. Project? “It was fun and interesting, great to be able to talk to all sides and actually have an intelligent and civil conversation about the Second Amendment.”