Randi Rogers’s Life is Made of Many Happy Accidents 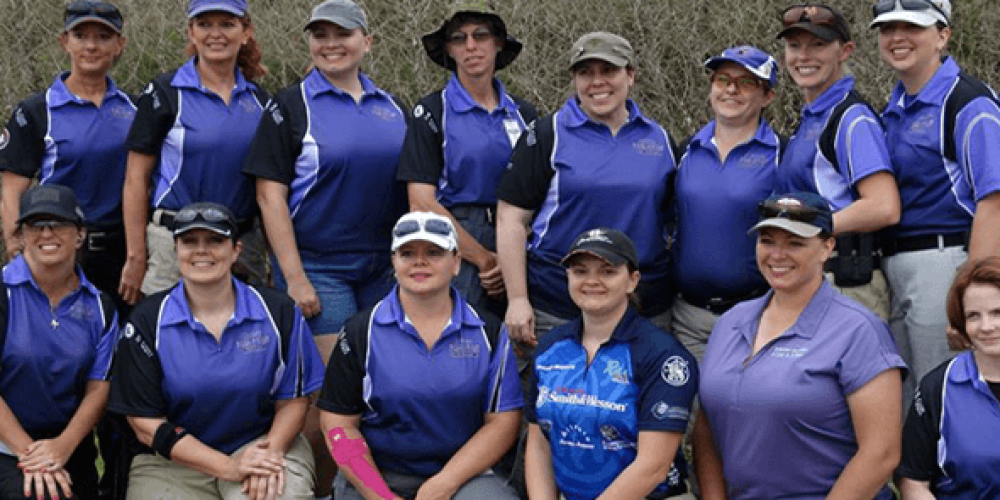 Randi Rogers has been shooting since she was 11 years old. After 18 years in the industry, we wanted to find out more about her experiences in the different types of shooting sports.

Nancy Keaton: Tell us about your background. How long have you been shooting/involved with firearms? How did you get involved?
Randi Rogers: I started shooting with my grandparents. It was really kind of an accident. I spent one week each summer with them and grandpa (“Evil Roy” of Cowboy Action Shooting fame) was preparing for the World Championships. One time they didn’t have a sitter so they took me with them. I shot a .22 and absolutely love it. Then we moved closer to them and they began to involve me regularly. It was so amazing to grow up shooting, I’m so fortunate that from the ages of 11-18 that I got to travel with my grandparents around the country and the world.

NK: What kinds of shooting have you participated in? Do you have a favorite? Which one do you think is easiest for new shooters?
RR: I shot Cowboy Action exclusively for about nine years. Then by a stroke of luck a firearms company contacted me about being on a team. That was my first try at modern shooting. I’ve shot IDPA, USPSA, Steel Challenge, 3 Gun Pro Am. It’s hard to choose which one I like best. Each one offers a different challenge. In USPSA you get to shoot a lot and run around. IDPA and 3 Gun are awesome, too. For a first time, probably IDPA would be best. You need the least amount of gear and round count, which is important to help keep costs down.

NK: What has been your greatest joy as a young shooter?
RR: Shooting was the first thing in life I was really good at. Shooting was my first real sport. I still can’t throw a ball. Shooting gave me satisfaction, it changed me, gave me something to improve at and just really worked for me.

NK: What has been your greatest challenge?
RR: I’m shy and an introvert. It can be a little hard when it’s not easy to talk to people. People will see me being so quiet and wonder if I’m mad or focused or what. But I’m not, it’s just hard to talk to people.

NK: What accomplishment has made you the most proud?
RR: Something that may not seem like much but is a huge part of how I am today. It was at my first big match. I was so excited but I shot horribly. I missed targets and shot out of order. I was the last junior, finishing in 8th place – and I received a buckle for being last. I was ashamed and embarrassed. But sitting at the table with my grandparents, one friend leaned over to talk to me. He said had had been there 15 years and never received a buckle. I really thought about that and went home and practiced to improve myself.

Six months later I went to the world championships with my grandpa and won my class: Junior Girls. And it was because I didn’t give up. So that’s what I’m most proud of, that I kept trying to improve myself and didn’t just give up.

NK: What’s it like being part of Team Smith and Wesson? What is the most fun you have had?
RR: It’s such a pleasure to be part of the team. It’s strange because even though we’re a team, we compete individually. I learn so much from the others, I get to have all of these resources to ask questions of and to spend time with. I’m so honored to be part of it.

I have also been able to teach some S&W employees how to shoot. Not all of the employees are gun people so being able to share my knowledge and experience is fun. And seeing their eyes light up is amazing, I love that feeling.

NK: I read you studied marketing. Did you do that knowing you wanted to work in marketing in the firearm industry?
RR: Yes. I attended the University of Northern Colorado, studying Business-Marketing because I did hope to turn it into a career in the firearms industry. I had helped with the Evil Roy Shooting School and the web business. I really liked that, and enjoyed shooting so much that I wanted to continue in the field for my whole life. Working in the industry allows me time to practice and to travel.

Getting a job in the industry is important. Some people think they would like to make a living shooting, but the truth is I know maybe two people who actually do that – everyone else has a job. Making a living shooting is not an impossible dream but they should have a backup career plan.

I don’t have any regrets, I have a career. If I couldn’t shoot, I can still pay the bills. Shooting is my hobby, not my job. It probably wouldn’t be as fun if I had to depend on it to pay my bills.

NK: How were you led to Comp-tac Victory Gear?
RR: I am the Sales and Marketing Manager because of one of those happy accidents. I was shooting IDPA and was talking to general manager, Gordon Carrell, about working in this industry. His ears perked up and said they had an opening.

NK: How has it been for you working as a young woman in the industry?
RR: I have been in the industry for so long, it’s hard to know if any other industry is different. Oh, I’ve had a few, “You cut little girl, you can’t do that” comments, but they have been few and far between. In the last several years we have seen a HUGE surge of growth of women making themselves known in the industry. It never ceases to amaze me how many women are already involved. I can think of probably 20 high-ranking women who work in the industry.

NK: You were just named one of the “12 Women Shaping the Shooting World” on the NRA blog. Congratulations! What do you think about that?
RR: I am so honored, I was floored to be included. I want to give a huge shout-out “Thank you!” to the NRA for the article.

NK: How do you think we can encourage more young women to shoot?
RR: We have to rely on everyone to bring them in. Aunts, grandmas, every family member is responsible to bring them to sport. And getting more moms involved gets more kids involved.

NK: You’ll be teaching a couple of classes at A Girl & A Gun Conference – how do you like teaching? What will be the main point you hope to get across?
RR: I’ve known Julianne for several years, she’s been trying to get me to come to conference and this is the first time it’s worked out. I’m nervous and excited. I taught as a kid as part of Evil Roy Shooting School, but haven’t taught lately. My shyness makes it a bit hard. But the conference is about experience and relationships and I want the women to know that.

For my classes, I want women to understand that by working on the little things you can make a lot of progress. Women often just go right into the hard stuff and don’t cover things like, “How do I hit the target in front of me?” I want to give women the confidence to hit the target.

In my second class, I’ll be presenting with my husband, Gordon (Carrell). We married a year ago, after I had worked at Comp-Tac for four years. I am bringing him to help give a lecture on how to train with your spouse – we think we have a few insights.

NK: What would you like to see in the future for yourself?
RR: More hunting, and shooting every day for the rest of my life. I like to shoot more than anything, I wouldn’t be the person I am without it. I am just so thankful and so grateful and I want to continue to share my joy of shooting with as many people as I can before my time ends.