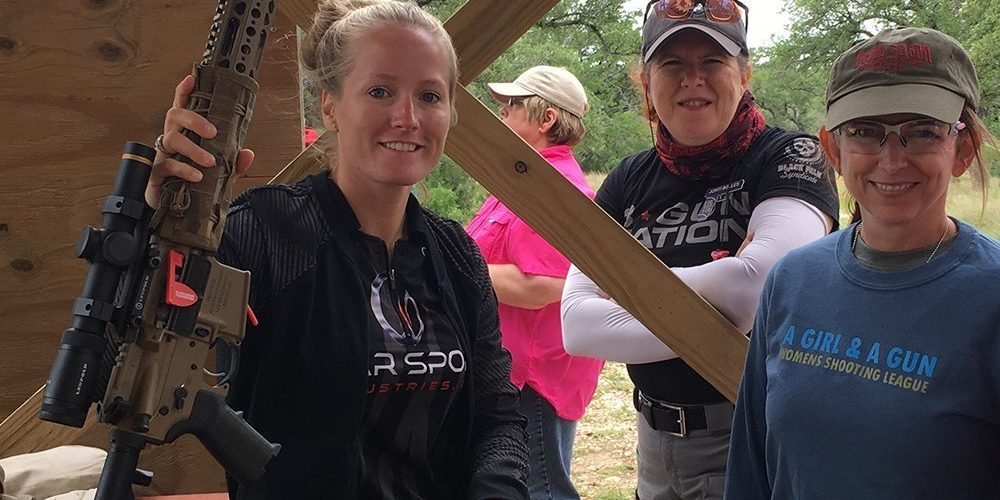 AUSTIN — A Girl & A Gun Women’s Shooting League (AG & AG) hosted its 4th Annual Training Conference from April 25 – May 1, 2016. Among the incredible line-up of instructors was War Sport’s Candice Horner.

“War Sport is proud to be a part of the 4th Annual A Girl & A Gun Training Conference in Marble Falls, TX,” the company said in a statement. “We are excited about the increasing number of women enjoying shooting sports and other firearms related activities. In appreciation for the attendees of the conference, War Sport is offering a discount on our rifles. We look forward to working together to promote women’s shooting interest and participation in the competitive shooting sports.”

The Conference hosted 260 shooters in training classes on dozens of shooting topics. Candice Horner taught sessions on Understanding Optics, which covered MOA, Mils, Variable power scopes, red dot sights, FFP vs. SFP, when and how to use which type of optic, as well, as Intro to Long Range Shooting. This session focused on marksmanship fundamentals, understanding units of measure used in shooting (MOA and Mils), estimating and adjusting for wind and other environmental factors, basic ballistics, and why ballistic coefficient matters to long range shooting.

“It has truly been an honor to be a part of an event that specifically targets the growth of women in shooting sports and self protection,” says Horner. “The professionalism of A Girl & A Gun is top-notch. The event was well organized and made it possible for instructors to focus on the attendees, which made it possible for the attendees to gain a wealth of knowledge over the course of three days. I’m excited to see how A Girl & A Gun will continue to grow and make it possible for women in shooting to build life-long friendships while exercising their Second Amendment rights.”

Founded in 2007, War Sport Industries is driven by the purpose to provide superior quality Advanced Weapons Systems and develop products for Low Visibility Operations/Application for the modern war fighter. The War Sport LVOA rifle, released in 2012, has become one of the most identifiable AR-15s in the industry.

A Girl & A Gun Women’s Shooting League (AG & AG) is a club by women shooters for women shooters. The league breaks barriers for women and girls in pistol, rifle, and shotgun sports by welcoming beginners to learn the basics of safe and accurate shooting and providing experienced shooters with advanced-level opportunities. AG & AG’s girl-friendly events have been successful stepping stones for thousands of women into shooting sports and fostered their love of shooting with caring and qualified instructors to coach them.