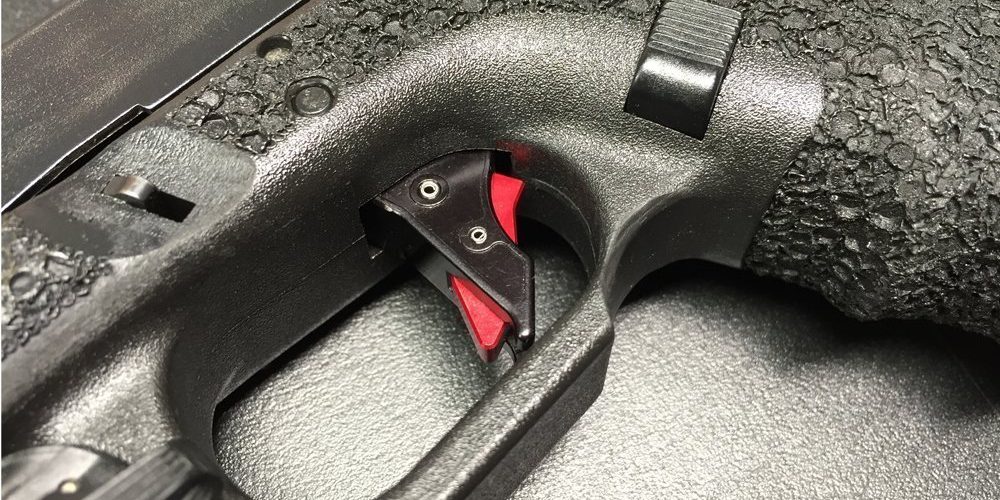 Most pistols have safety features to help prevent an accidental or negligent discharge. Some safeties are external and easily seen on the gun, while some are internal safeties that prevent a round from being fired if the gυn is dropped or struck. Early revolvers did not have any safety mechanism, so the hammer rested down on an empty chamber so the handgun would not fire, but most modern double-action revolvers have an internal safety, either a transfer bar or hammer block, to prevent firing without a trigger press.

The most common form of safety is the mechanical switch/lever that can be placed in the “safe” position to prevent the trigger from being depressed and the firearm from firing. These are the oldest forms of “active” safety mechanism and are widely used. Usually the shooter uses her strong thumb to engage or disengage the external manual safety lever or switch.

• A grip safety is a lever on the back of the pistol grip that must be depressed by the shoοter’s hand, when naturally crushing the pistol in a firing position, so that the firearm can fire.
• A firing pin block is a mechanical block used in semi-automatic firearms and some revolvers that, when at rest, obstructs the firing pin from moving forward. This prevents the firing pin from striking a chambered cartridge unless the trigger is pressed, even if the hammer is released due to a faulty sear or the pin is dropped or struck by another object.
• A hammer block is similar to a firing pin block. It is a latch, block, or other obstruction built into the action and usually positioned to prevent the hammer from contacting the cartridge primer or firing pin when at rest.
• A transfer bar is also used in revolvers and certain exposed hammer rifles, but works the opposite way from a hammer block. The transfer bar has the spur that would otherwise be on the hammer or encloses a firing pin similar to autoloading designs.
• A drop safety is a mechanical block that is only removed when the trιgger is pressed, so that the firearm cannot otherwise discharge. These are usually passive safeties designed to reduce the likelihood of a firearm accidentally discharging when dropped or roughly handled.
• A safety notch is one of the oldest forms of drop safety. It is a relief cut made in the tumbler at the base of the hammer that allows the sear to hold the hammer a short distance from the pin or cartridge primer in a “half-cοcked” position. Some do not consider it a safety mechanism. A certain amount of manual dexterity and familiarity with a gυn is also required to “half-cοck” it. If the shoοter is unfamiliar with how to engage the “half-cοck” position, accidental discharges can happen.
• A trigger safety is a lever that sticks out from the trigger face and must be fully depressed in order to disengage a lock that allows the main trigger body to move.
• A magazine disconnect is an internal mechanism that engages a mechanical safety such as a block or trigger disconnect when the fιrearm’s magazine is removed. The gun cannot fire without a magazine, so an accidental discharge can be prevented if someone removes the magazine, but forgets that a round has been chambered.
• A decοcker allows the hammer to be dropped on a live cartridge without risk of discharging it, usually by blocking the hammer or retracting or covering the firing pin before releasing the sear.
• A loaded chamber indicator (LCI) offers a visual warning to the shoοter. The LCI is a safety device present on many pistols to alert an operator that there is a round in the chamber. It is a small button or rod usually located just behind the ejection port on the slide of the handgυn that pops up to indicate the presence of a round in the chamber.

Remember, ALL mechanical devices can and do FAIL. Safeties are mechanical devices, so do not put your life on them nor trust them completely. The best safety for any firearm is your brain, so THINK and FOCUS on what you are doing putting SAFETY FIRST at all times. Get the proper training for safely handling your gυn, know your gυn, its safeties and functions, and how to operate it safely and effectively. Always obey the 4 Rules of Gun Safety and model safe gun handling at all times.