When You Are Disqualified in a Match 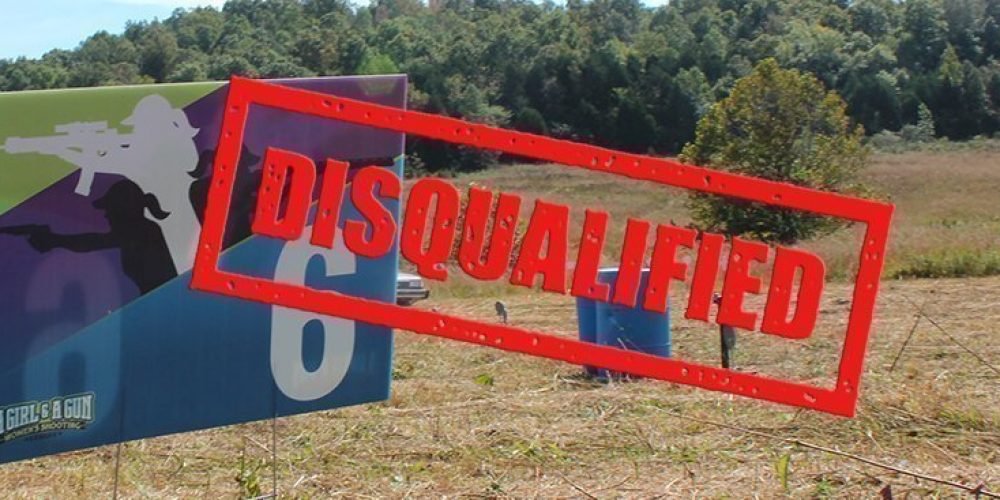 We all worry about it. And stress about it. And panic about it. What are some of the reasons shooters get DQ’d? And what really happens then? A few of the ladies who DQ’d at the 2017 A Girl & A Gun Brownells Ladies Multigun Fall Festival share their stories.

I was on the shotgun stage where you had to go over the tank. I got one shot off, then when I pulled the trigger for the second one, nothing happened. So I went to eject the shell, and it went off. It was a hang fire. I had never had one before. It scared me to death. Luckily I had it downrange in a safe direction.

I cried a little bit, but you don’t cry at 3Gun, so I tried to suck it up. You question everything. Did I do something? How did that happen? People asked if I was going to leave but I said, “No. I’m supporting my team. I’m staying and putting up targets, I’ll watch you guys.”

It was tough, there were things I really wanted to challenge myself and do, like the bridge. But I’ve met so many neat people. Everybody is so encouraging. It was so hard to watch everyone, but you just learn from it.

I was moving with my rifle pointed mostly at the target but decided at the last minute to shoot using the wall as a barricade instead of off-hand like I originally planned. As I made that transition I accidentally bumped my trigger. It was in a safe direction but still accidental so therefore I knew I was done.

Every shooter always says, “It’s not if, but when you DQ.” It happens in everyone’s shooting career at some point. This is my second in my two years of shooting. My first DQ was because I broke the 180 at an indoor pistol match when I first began shooting. I hadn’t learned to move safely, comfortably, and definitely not quickly yet. These are both learning moments where you remember that safety is the foundation of everything in our sport. I am now hyper-aware of my transitions and where my trigger finger is.

It truly does happen to everyone whether it’s your first match or your millionth!

On my very first stage I had an accidental discharge. On the make-ready command, I hit the B.A.D. lever on my AR and then accidentally hit the trigger. For some reason my gun wasn’t on safe, and a round was discharged. So I didn’t get to shoot at all. It was really disappointing. I spent a lot of money to come here and then to not even get to shoot was hard. It was my first DQ. They say it’s not if, but when it will happen. Hopefully it’s also my last DQ. I stayed though and helped out with resetting and supporting my squad.

I learned a couple of lessons. Number one is to make sure your gun is on safe. Second, I don’t recommend using B.A.D. levers even though I had never had a problem before this. Third, it was a little embarrassing, but it happens to everyone. I talked to my squad mom, Tennille Chidester, and she has DQ’d too. It happens to the best, but there are things you can do to prevent certain things. For me, it was a silly mistake. You just have to make sure you have your ducks in a row. And remember, it happens to the best of shooters.

On stage 6, I had a great plan. I decided I could make up for my very slow shotgun reloading time by running from the shotgun dump to the first bridge. The shotgun portion went flawlessly. I dumped my shotgun and started my “sprint.” I felt my pistol “leap” out of the holster and land on the ground. I immediately heard the RSO yell “STOP!” I froze mid-step and slowly turned around. All I could do was look at my hip and then back at the ground in disbelief. I knew it was over but was in shock that this could happen. Aren’t these holsters made to form fit the pistol and keep it snugly in place? Running shouldn’t make it leap out on to the ground! This brings me back to my very wise AG&AG facilitator—KNOW YOUR EQUIPMENT. What I did not know was that the holster might need to be tightened to make sure it keeps it secure.

So how did I feel? I only had two goals going into the event: 1) Don’t DQ and, 2) Don’t finish last. Well, not meeting goal #1 was beyond disappointing! Although I smiled graciously, intently listening to the RSO explain how a holster works (very nicely), and my squad mates attempts to console me. I just needed five minutes alone in my car to shed a few tears of disappointment to collect myself. I took my five minutes and decided to be the best “stage setter” and squad mate I could be for the remainder of the match. I hustled to try to reset more targets than any of my other squad mates. I had to prove not only to them but to myself I was still a valuable member of the squad and someone they would want to squad with again.

I want others to learn from my lack of knowledge – NOT knowing my equipment, to ALWAYS listen to your wise AG&AG facilitator, and to dust yourself off/pick yourself up and be a great team player.

I am a new 3-Gun competitor. At my first big match in Kentucky at the last stage of eight stages I was DQ’d. I finished shooting my shotgun then moved to my AR. I shot a few targets and then turned to run to the next section of targets. Unfortunately, I wasn’t holding my AR in a safe direction. The AR wasn’t pointed at people just not pointed as it should have been. I know better as I have been around and shot firearms my entire life and hunted many places around the world so firearm safety is not new to me and always on my mind. However, in the heat of the moment and not using my head I made a big error and one that shouldn’t be taken lightly.

I was mad at myself but glad there was someone there to point out my error and I was immediately stopped in my tracks. Of course I couldn’t continue shooting.

I was a little embarrassed but I took it as a big and hard lesson learned early in my 3-Gun shooting. It just made me more determined to keep my head screwed on straight and don’t let being in a hurry cause you to be unsafe.

The ladies in my squad were very kind and consoling and I was glad for that. Many had unfortunately had the same experience of being DQ’d so they understood where I was at that moment.

Safety is the most important thing in shooting and I’m thankful for this experience and thankful that I can learn something every time I shoot.

Bottom line: It’s not the end of the world. It may be embarrassing but you’ll get over it. Your squad mates will still love you. Stick around, cheer them on, and just learn from it. And remember – even the pros have been DQ’d!