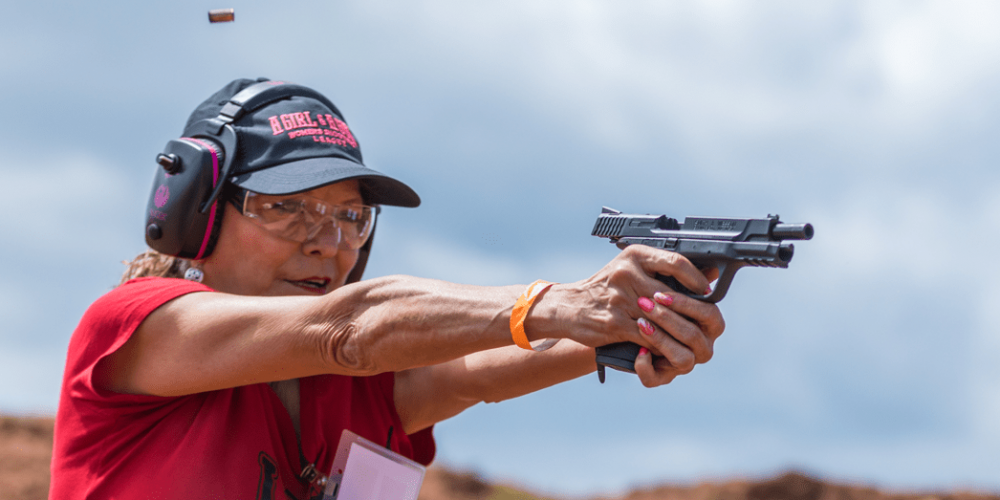 With every trigger press, a controlled explosion takes place in the ammunition cartridge. The series of events that propels the bullet out of the pistol barrel creates a rearward thrust called recoil. The kinetic energy of this process is transferred from the firearm to the shooter, which is the “felt recoil,” also sometimes referred to as “kick.”

Recoil is affected by a number of factors. The material of the firearm influences how it transfers the kinetic energy into the shooter’s hands. For example, recoil in metal vs. polymer frames will feel differently to the shooter. Recoil is also influenced by the recoil assembly of the firearm. Flat or round springs, spring weight, or single springs vs. stacked or combination springs all have different results. Another factor is the shooter’s choice of ammunition. Each caliber has a different felt recoil, and even the brands, types of primer igniter, bullets, and propellants all play a factor. Some firearms have compensated barrels, which also affect the amount of recoil the shooter experiences.

The most obvious influence on recoil, however, is the size of the pistol. A bullet will leave a shorter barrel faster than a longer barrel. Because the distance is shorter, the pistol cycles sooner, and sometimes more aggressively, resulting in stronger felt recoil. The shorter barrel usually accompanies a smaller or lighter handgun, which has less mass to disperse the kinetic energy, and therefore causes more force into the shooter’s hands and more muzzle rise upon firing. Proper shooting fundamentals, especially grip and stance, help to mitigate the felt recoil. (See Managing Recoil.)

The size of the firearm may also come into play if the purpose of the handgun is for concealed carry, and if the woman has a preferred method of carry that works best with her body type and wardrobe choices. Proper gun fit will ensure that she can reach the controls without dramatically adjusting her grip in a potentially unsafe manner. When firing the gun, she should be able to absorb the transfer of the kinetic energy without hurting her hands. Sharp edges that were not noticeable at the gun counter will reveal themselves quickly during recoil, which is why it is advisable to live-fire a gun before purchasing that model. Many A Girl & A Gun host ranges and chapters have rental programs where women can shoot various sizes, brands, and styles of handguns. It is important that a woman selects a firearm that is comfortable for her hands and right for her needs and goals.