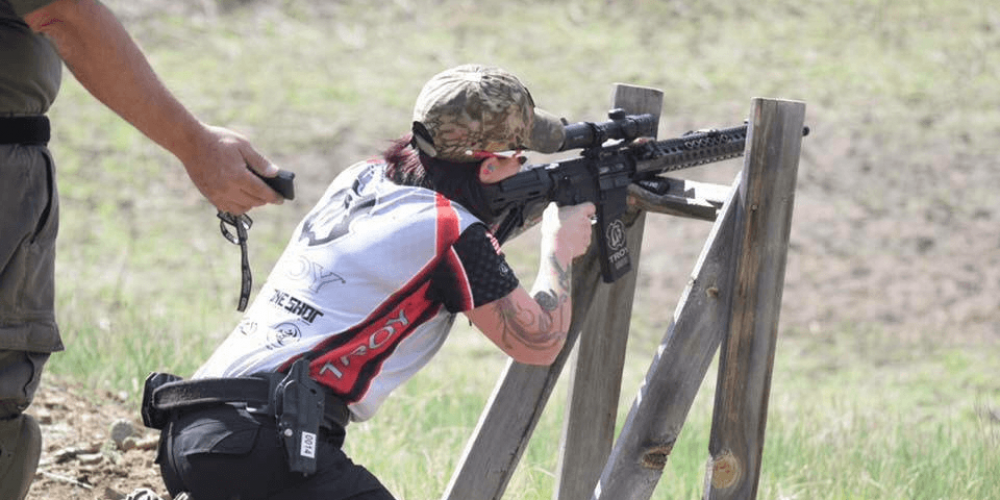 What might be more fun than shooting a big match? How about getting to help select the prizes from a major sponsor?

Cindy DeSplinter had a chance meeting in 2016 at A Girl & A Gun’s 3-Gun University with Juli Brayton, VP of Marketing for Troy Industries. “We really just hit it off and kept in contact,” smiles Cindy.

The next thing she knows, Cindy, along with friend and fellow shooter, Ursula Williams, are competing as part of the Troy team of shooters. “I wear their jersey and get to shoot one of their rifles. I also help with social media, posting on Instagram, etc.” explains Cindy.

But another fun thing she gets to do as part of the Troy team is recommend which prizes Troy donates to matches. “My favorite part of working with Troy is their support of women in the industry. I’m not the best shooter but it’s all about representing the sport and empowering women to get into shooting, and Troy is very supportive of that.”

So for this year’s A Girl & A Gun’s Brownells Multigun Fall Festival coming up in October, Cindy put together a list of prizes that she thought shooters would like. “I try to be practical and have items that appeal to a wide range of people. I don’t want to have prizes that someone sponsored by another party can’t use because it would be a conflict of interest. I want it to be that whatever prize a person gets, they can actually use it in competition. And I want prizes especially for this group of women who may be just be getting started and getting by with whatever they can get their hands on and utilize, such as muzzle breaks and other accessories.”

Cindy DeSplinter shoots mostly regional events since travel is a little difficult as she has another full-time job. “I try to shoot once a month whether local or not. I work a lot of matches and try to wear both hats as a staff and as a sponsor. When Julianna [Crowder] and Denise Johnson put on matches, they are my priorities, to give my time and presence to help run the matches. They support my goals and I want to support this great partnership.”

This year, though, instead of working at Fall Fest, Cindy will be attending for the first time as just a shooter. “I just really felt I needed to shoot with Ursula as a Troy team,” she explains. And she’ll still have a great time watching the competitors as they pick out the prizes she helped select for them.

Through Troy Industries’ generosity and support of women in the shooting sports, competitors have a chance of winning one of over 100 Troy items at Brownells Multigun Fall Festival. There is still time to register and come on out and shoot for your chance at winning one of Troy’s great products.