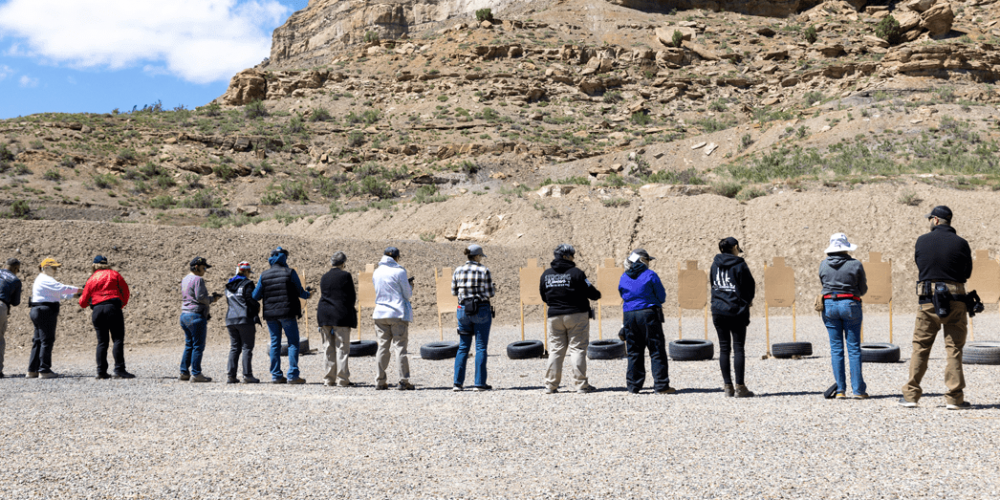 Articles about the “best handguns for women” are often simply an opinion of hand size and concealability; however, the most accurate way to determine what women consider the best handguns is to observe what women are actually bringing to the range.

At the A Girl & A Gun National Conference CELEBRATE 2022, attendees brought 739 handguns to use for training classes ranging from concealed carry to competition. There continues to be diversity among the handgun brands preferred by women. Here are the most popular handguns with women who attended the Conference:

The GLOCK 19 was the most popular gun among women with 12.31% of all guns being this model. The firearm has a versatile size that can be used for defense, competition, and general skill-builder training courses. The GLOCK 19 is not only the most popular gun for women, but also one of the best-selling firearms in the United States for its magazine capacity and reliability. A handful of these included the GLOCK 19X.

The second most popular handgun among women was the P320 from Sig Sauer with 9.61% of all handguns. Nearly one-third of the P320s on site were the standard model; however, 12.68% were the P320 Legion and 14.08% of them were the X5 Legion. This gun is easily customized making it a favorite for women.

The fourth most popular model among women was the M&P from Smith & Wesson. The numbers were split 60/40 between the legacy M&P 9mm model and the M&P 2.0 models. The slim grip and interchangeable backstraps make this model a go-to handgun for women.

Although built on the M&P platform, the Shield stands on its own. 5.82% of the handguns on the range were a version of the M&P Shield. Of these models, 40% were the Shield EZ and 47% were the standard model or 2.0 version.

The GLOCK 17 represented 4.73% of all handguns that were brought by women to the range. This handgun is the “original” GLOCK pistol and still is the primary go-to for many women. When a shooter wants full-size pistol with 17+1 capacity and a ton of aftermarket accessories, the GLOCK 17 is an obvious choice.

The next most-popular gun among women in 2022 was the GLOCK 43. Its compact, single-stack design makes it popular for concealed carry and for women who prefer the slimline grip, as a reliable alternative to the SIG P365 and S&W Shield.

In 2022 there were 1.85% more Canik pistols on the range than in the previous year. The total handguns that were Canik pistols represented 3.91% of the handguns brought by women, and the majority of those was the TP9 model.

Walther pistols had a 2% surge among women from the previous year and the popularity of the PDP contributed to this jump. 3.52% of all handguns brought by women were the Walther PDP. Note that the PDP F-Series designed for women launched at the Conference, so there were none brought by participants; however, this is a statistic to watch in the years ahead.

Due to its long slide that mitigates recoil and increases speed for competition, the GLOCK 34 is a popular model in the A Girl & A Gun community. Roughly 3.518% of the handguns brought to training were a GLOCK 34.

Handguns for Women, Determined By Women

All 550 students were required to go through a “gear check” process where their handguns, belts, holsters, and mag pouches were all reviewed and function checked.

Note: CELEBRATE 2022 Gear Check Logs listed brands and models of handguns, belts, holsters, and mag pouches. No serial numbers or personally identifiable data was collected. No information on rifles or shotguns was collected during gear check.

The following lists the most popular brands and models of handguns that the women brought to training:

A Girl & A Gun (AG & AG) is a membership organization whose events are successful stepping-stones for thousands of women entering the shooting community by fostering their love of shooting with caring and qualified instructors who coach them. AG & AG breaks barriers for women and girls in self-defense, and in pistol, rifle, and shotgun shooting sports by welcoming beginners to learn the basics of safe and accurate shooting and providing experienced shooters with advanced-level opportunities. The club has members in all 50 states and hosts recurring Girl’s Nights Out at hundreds of ranges throughout the United States.