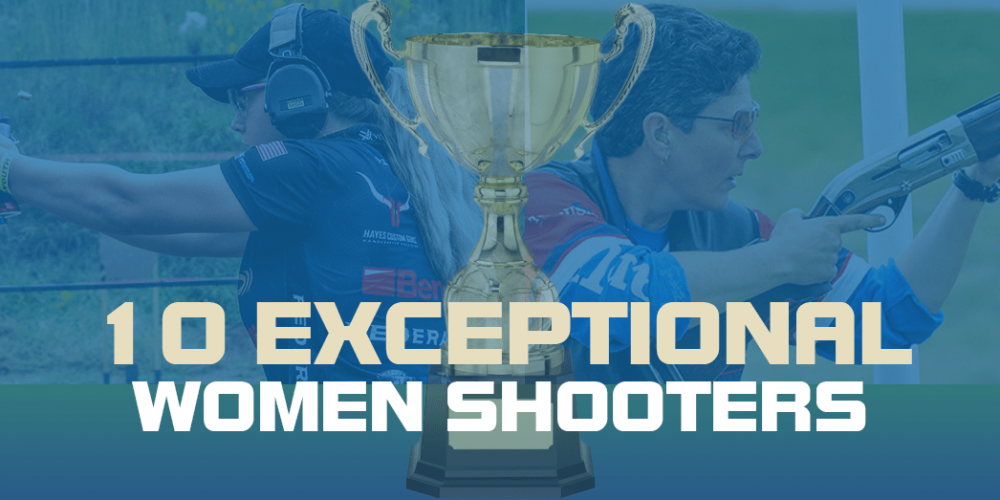 Recently I was approached by a gentleman whose wife was beginning to show interest in shooting. He wanted to introduce her to “the best female shooters.” I tried to explain that being “the best” was a relatively subjective term, and there are many different types of shooting sports and activities, so it is difficult to compare across genres. However, I compiled a list of 10 exceptional women shooters that everyone should know.

Dakota Overland is one of the best 3-gun shooters in the world. At 17 years old, she still competes as a Junior in 3-Gun, USPSA, and IPSC. She recently won the 2020 USPSA Multi-Gun Ladies Championship. At the international level, she represented the USA at the 2018 IPSC Shotgun World Shoot in Chateauroux, France, where she won a bronze medal. Dakota is an A Girl & A Gun member and was the Overall Winner in Tac Ops at the 2020 AG & AG Multigun Challenge at Fall Fest.

Ashley Rheuark can run a pistol stage like few in the world. She is lightening fast and has several national titles to prove it. In addition to winning IDPA BUG Nationals, she was the Ladies Champion in USPSA Multigun Nationals, World Speed Shooting Championship, IPSC Nationals Production Optics, and IPSC Rifle World Shoot. Ashley is also a 2x Overall Winner of the A Girl & A Gun Fall Fest Multigun Challenge.

Kim Rhode is a 6x Olympic medalist and the first American athlete in history to win 6 consecutive medals in an individual sport. She is a 6x USA Shooting Female Athlete of the Year and the first-ever recipient of the Winchester Legend Award. She was the youngest woman to break 100 in American Skeet.

Tatiana Whitlock is a leading woman instructor for civilian defensive training. Her classes are filled with men, women, and youth, who are seeking to establish a real-world foundation of firearm skills, safety, and situational awareness. She is the Director of Training for A Girl & A Gun Women’s Shooting League and teaches at National Conference.

Regina Malkovich is dubbed the Wonder Woman of tactical precision rifle shooting. She is one of the most dominant long-range rifle shooters in the nation, male or female. She is the first female to have an overall win in a national-level precision rifle series competition.

Lou Ann Hamblin served in law enforcement for 22 years before retiring, and spent the next two decades training female officers in firearms and defensive tactics in a variety of disciplines. She was named ILEETA’s “Iron Cop” in 2009 and in 2015 Lou Ann received Alumnus of the Year for the University of Michigan School of Education for her contributions to public safety training.

Lena Miculek has more than 60 major wins and 8 world titles in 5 shooting disciplines. Her focus is on PCC and 3-gun and she holds two speed-shooting world records.

Ginny Thrasher is an Olympic gold medalist in air rifle. Throughout her college career she dominated smallbore and air rifle national and international competitions. She is a 12x All-American winner. She was selected as one of NCAA student-athletes across all sports and all divisions to be honored as the 2020 Today’s Top 10 Award winners.