The Right to Keep Arms Beyond Firearms 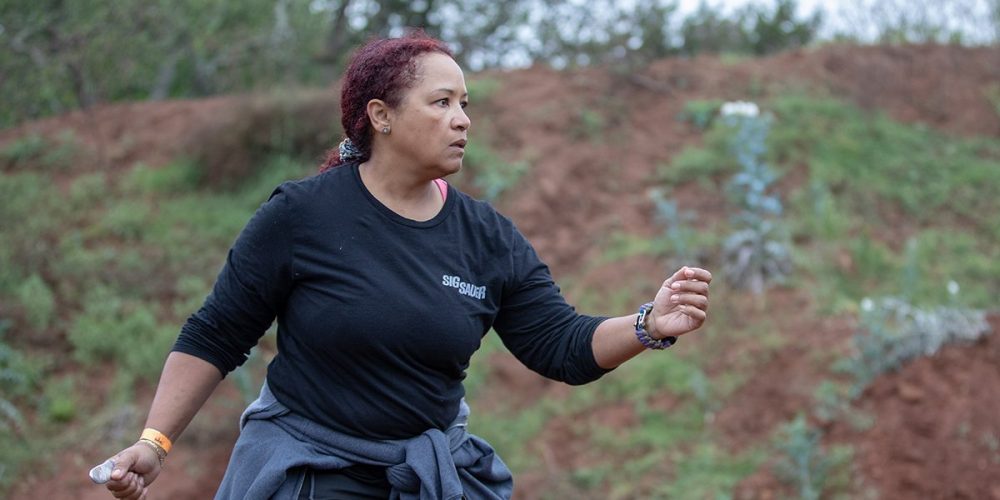 Many, if not most, gun girls are also blade girls. A knife is a tool that has a lot of uses, from getting into Amazon boxes to hunting/shelter making, and even protecting yourself. Knives are great because they never run out of ammunition and even a dull serrated blade will do some serious damage. Every year at National Conference, A Girl & A Gun offers knife classes for members to learn self-defense strategies against an assailant both with and without a blade. Because the knife is a widely excepted tool that you are permitted to carry just about anywhere you go, it is a great addition to your EDC (everyday carry).

Our rights to carry knives are “enshrined” in the Second Amendment:

A well regulated Militia, being necessary to the security of a free State, the right of the people to keep and bear Arms, shall not be infringed.

The Second Amendment doesn’t say “firearms,” it says “Arms.”  In 1755 Dr. Johnson’s Dictionary of the English Language defined “arms” as “weapons of offence, or armour of defence.” Knives were and still are “Arms.”

In 2010, I attended my first-ever NRA Annual Meeting with my husband and two sons. My youngest son was 12 and totally obsessed with knives.  While wandering around the massive exhibit floor in Charlotte, North Carolina, we came across the Knife Rights booth — and it was the beginning of a wonderful friendship.

Doug Ritter is the Founder and Chairman of Knife Rights, an advocacy organization whose mottos are “A Sharper Future” and “Essential Tools – Essential Rights.” Doug was inspired to create Knife Rights on July 25, 2006, when he read an article in the Wall Street Journal demonizing so-called “tactical knives,” knives with a one-hand opening and locking blade for safety, which also happen to be the most popular pocketknives carried in America. Doug reached out to members of various knife forums in response to this article, created a website, designed a logo, and Knife Rights was born!

The early years were difficult and it was a constant battle to raise funds and increase membership.  However, in 2009, President Obama’s Customs & Border Protection proposed rescinding rules that had determined that Assisted Opening Knives (one of the most common one-hand opening knife) were not switchblades under the Federal Switchblade Act.  The new proposals would not just rescind those determination letters, they would classify any knife that could be opened quickly with one hand a switchblade.  Though this change in how a switchblade was defined would have only directly impacted imported knives, there was a fear this new definition would trickle down, impacting state and local laws and court decisions.

Representing grassroots knife owners as part of a coalition of organizations that fought this effort, Knife Rights helped defeat this new interpretation of law by adding a fifth exception to the Federal Switchblade Act covering one-hand manual and assisted opening folding knives.  Doug explained that this gave Knife Rights instant credibility and set the stage for growth and further success.

Doug and his small team, his wife Sue, and a full-time lobbyist, work tirelessly for knife owners. When I asked him what his greatest accomplishment was, he didn’t hesitate: In 2019,  Knife Rights stopped New York City’s persecution of pocket knife owners carrying common folding knives. This accomplishment took nine and a half years!  By the time it was over, NYC was prosecuting an average of 10,000 people per year for carrying a pocket knife! Approximately 87% of those arrested were persons of color.

Knife Rights sued NYC in Federal Court on civil rights grounds, while also working to solve the problem by repealing the state’s Gravity Knife ban that the NY Police Department and District Attorney Cyrus Vance, Jr. were abusing.  This bi-partisan legislation was twice vetoed by Gov. Cuomo. With their case on appeal to the U.S. Supreme Court and; set to be heard in conference (to decide if they would take the case), Gov. Cuomo finally signed the repeal into law!

By the time this was accomplished, over 70,000 people had been prosecuted! With the crime of possessing a Gravity Knife carrying a potential penalty of a year in jail, anyone with a prior conviction for even a minor misdemeanor, even decades earlier, was upgraded to a felony.  Many, almost all persons of color, went to jail for years, and lost their gun and voting rights, simply for carrying a common pocket knife!

Since its inception, Knife Rights has stopped nine state-level anti-knife bills and has been responsible for 34 bills being enacted that repealed knife bans in 23 states and over 150 cities and towns.  They really have created a Sharper Future! But, their work is far from over.

Despite being a Second Amendment organization, Knife Rights has been very successful gaining the support of anti-gun organizations and anti-gun legislators.  Even legislators who have been graded “F” by the NRA have been sponsors of knife bills repealing knife bans.  Doug explained that “at its foundation, we do criminal justice reform, which is important to both sides.”

Knife Rights has also introduced large numbers of individuals to the Second Amendment.  People who were not gunowners (not necessarily anti-gun; they just didn’t see it as important to them) now see that their tools (knives) fit under the big tent of the Second Amendment.

A Girl & A Gun members can sign up for the Knife Rights free News Slice email newsletter to stay informed of the great work they are doing and legislation or litigation happening in your state.  You might also download Knife Rights’ free app, Legal Blade, which provides guidance on the knife laws of all 50 states, the District of Columbia, and over 40 cities. Knowledge of the law is the first step in avoiding an unfortunate arrest, loss of your knife, or other legal complications.