The Remington Experience in San Antonio 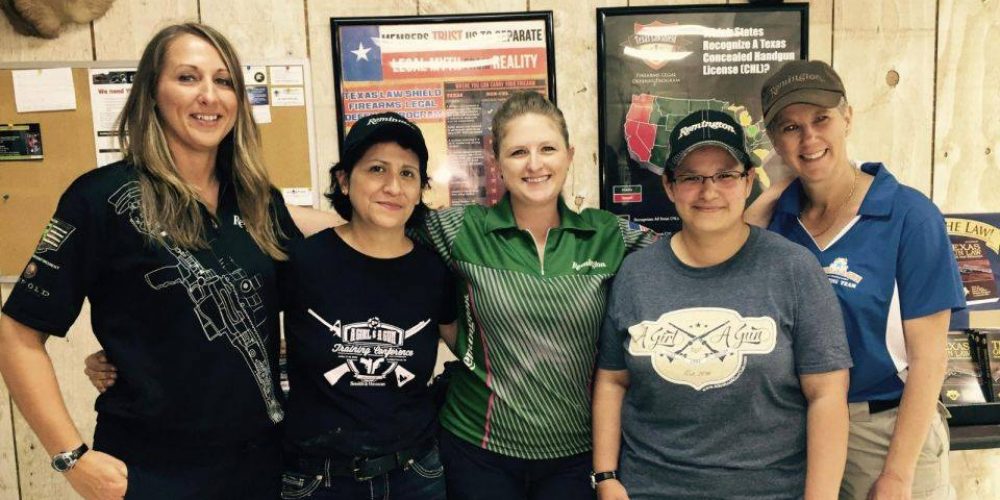 On May 22, 2015, the San Antonio chapter of A Girl and A Gun (AG & AG) had the amazing opportunity to participate in a shotgun and rifle demonstration hosted by Jessica Kallam, Manager for Media Relations for Remington Outdoor Company, and Ashley Kerr, Manager for their Women’s Initiative. The Remington Women’s Initiative is the result of the conscious corporate decision to proactively lead the effort to learn the specific needs of the female shooting community and to work on a solution that will address these needs.

It is important to me to tell the underlying story of the amazing customer service demonstrated by Jessica and Ashley as the driving force behind the Remington Women’s Initiative. The San Antonio AG & AG Remington Experience began earlier this year in February when our chapter was invited to participate in a focus group hosted by the Remington Women’s Initiative. This was our chance to let a major gun manufacturer know that there is much more to the female shooter’s needs than pink guns and “shoot like a girl” apparel. Our group jumped at the opportunity and spent several hours articulating the unique needs of a lady shooter. The conversation then turned to marketing ideas and once again the group shared our thoughts on the lack of understanding of what it takes to appeal to the female shooting community. One of the suggestions that was mentioned was that it would be worthwhile to host demo days to allow their target market to “try before you buy.” I am not sure if this demo day was a direct result of that recommendation, but I think it is safe to assume that it is a result of Jessica and Ashley taking our suggestions to heart. As an added bonus each, participant received a case of the ammo of their choice – a totally unexpected, but welcome surprise.

Fast forward two months and I once again ran into Jessica and Ashley as they were demonstrating Remington guns at the AG & AG National Conference in April. I personally was looking forward to shooting the Remington Versa Max Competition Tactical shotgun and was disappointed when I was told that it was not available to demo. In the effort to keep an open mind, I did shoot the model of the Versa Max that Remington had brought to the conference, but I am sure my disappointment was obvious. Jessica then made a promise that she was going to find a way to let me try the Versa Max Comp Tactical and phone numbers were exchanged so that she could look me up when she was in San Antonio in the near future. To be honest, I had professional skepticism that I would ever hear from her again; thankfully I was proven wrong. Jessica sent me a text in early May with the offer to stop in San Antonio on her way home from New Mexico on the weekend of May 23rd to keep her commitment. The invitation was also opened up to the rest of the San Antonio chapter. Remington supplied all of the guns and ammo for the demo and our local range, A Place to Shoot, graciously made their shotgun and rifle ranges available to our group free of charge.

Over the course of 3 hours the ladies of Remington bonded with the AG & AG shooters through a combination of expert guidance and the opportunity to just have fun with their impressive selection of rifles and shotguns. The selection of guns included the Versa Max Competition Tactical, Versa Max Tactical, Versa Max Woodtech, the Remington R-15 MOE, Bushmaster ACR FDE and the 870 Tactical Magpul pump-action shotgun. Thanks to this opportunity I was able to shoot clay targets (Country Doubles) for the first time and, with the combined coaching of Ashley and Jessica, I was able to shoot my first bulls’ eye at 100 yards using the R-15. Even Texas weather cooperated as the forecasted thunder storms failed to appear.

We have all been taught that actions speak louder than words and the actions of the ladies of Remington speak louder than any written corporate mission statement could ever communicate. The message I took away from this experience is that the ladies of the Remington Women’s Initiative are fully committed to the female shooting community and are passionate about finding a way to give us both the respect and the products we have been lacking. Remington also deserves to be recognized for their ability to see that this is an endeavor that needs to be approached in a holistic manner beginning with the design of the gun and not just a modification of the appearance of a gun.

I encourage the ladies of A Girl & A Gun to show our support for the company that is willing to take a chance on the female shooting community through the investment of substantial time and resources into the Remington Women’s Initiative. If we are not able to demonstrate that we are able to collectively support a women specific initiative, we may never be taken seriously by the gun manufacturing industry.

I am honored to have met and been able to get to know Jessica and Ashley and I am convinced that we will be seeing some great things coming from the ladies of Remington in the near future.