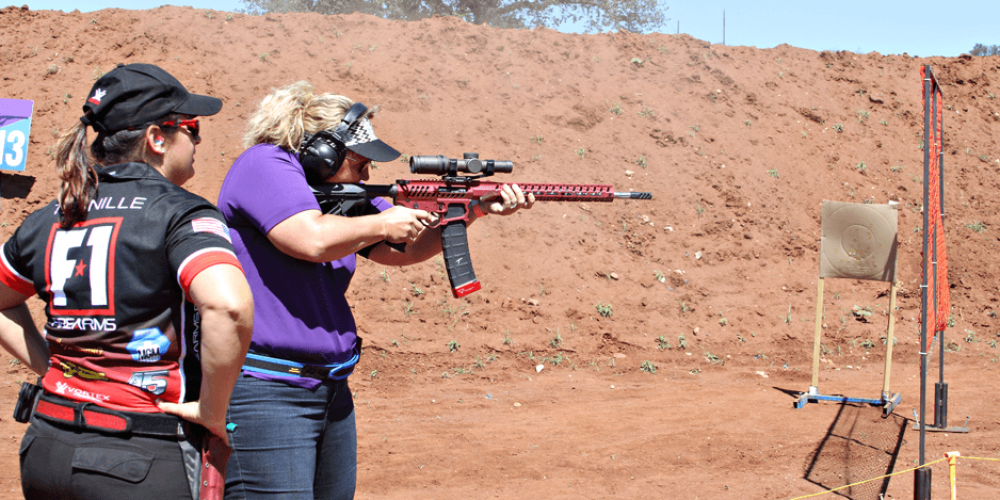 It started as a way to spend more time with her dad. When she was about 15 years old her dad was shooting USPSA and Steel Challenge. “We didn’t see him much,” says Tennille. So on Father’s Day her mother decided they would go hang out at the range and watch her dad shoot. You can picture the eye-rolling that took place at that suggestion. “As a teenager, that didn’t sound awesome,” laughs Tennille. But they went anyway. And as often happens, Tennille decided it looked like fun. By the next month, they were all shooting.

Shortly after that her dad, Mike Gibson, started MGM Targets, beginning with one springed auto-popper. “He says laziness is the mother of invention and he was tired of resetting targets. The whole family got sucked into it,” says Tennille. Brother Travis Gibson, and now her nephew, Wyatt Gibson are also heavy into the shooting sports, as well as her husband and son. “I come from a long line of shooters,” she laughs. “It’s a family affair.”

Thank goodness it is, because Travis thought about her when 3 Gun Nation started up. He encouraged Tennille to apply for a job with them, knowing they could benefit from her skills as an event planner. And they realized it too. Tennille worked part time for 3 Gun Nation for about two years, then went full-time. “I finally landed in the area I wanted,” she says. So now she is the General Manager and gets to plan all their matches. “The best part is the people. Getting to know them, watching them shoot and have a good time. It’s very satisfying.”

Tennille also gives credit to the crew putting on the match. “Most people don’t know all the stuff that goes on behind the event, what it takes to produce it. It takes a great team and we have that.”

Of course, we want to know if she gets to shoot in all those matches she organizes. “For the most part I get to shoot with staff so that I can run the main match with the rest of the crew. But it all depends on what’s happening and if we’re on track with our set-up.”

Another fun thing Tennille has been a part of is Ammo & Attitude, an endeavor started by producer, Stephanie Shipman. “She can see trends coming down the pipeline, and knew there needed to be a women’s outdoor show,” reports Tennille. Her involvement again came thanks to family. Ammo & Attitude had been running for three years when Tennille got an email from her mom. “She just said I should apply for this, Randi Rogers is the host, and included a link to apply. Well, I figured you have to do what mom says, so I did,” she laughs. She was selected for season four and went to Florida for 16 days for filming. “I managed to win that season,” she says modestly.

She went back in season six for the all-star challenge and immediately tore her ACL, but continued to compete. Amazingly she still came in runner up, even with her injury.

For seasons seven and eight, she was honored to be invited to host the program. While she doesn’t get to shoot, she enjoys having the opportunity to be part of it. “This group of women is incredible and outstanding. I love getting to watch them meet challenges they didn’t think they could do. It’s such a joy to share.”

You can watch Ammo & Attitude on The Blaze TV, their Youtube channel, or see it online 24 to 48 hours after it’s aired.

As for the Brownell’s Multigun Fall Fest, Tennille was invited to lead a stage walk-through. So what will Tennille focus on with her group? “I always feel like stage walk-throughs are like underwear,” she laughs. “They are very personal. The perfect plan for me may not be the perfect plan for you, depending on your skill set. You need to recognize and play to your strengths and minimize your weaknesses. For instance, I may be better at pistol on a certain stage, but if you can use a shotgun and you’re better at shotgun, that’s what you need to use. There isn’t always one right way to shoot a stage, it’s a personal thing.”

“My biggest reminder is that this is a game and as long as we’re having fun, we’re successful. I’ve done every stupid thing there is, when the buzzer goes off my brain fries,” she laughs. “But this is a game, it’s ok to have fun, to laugh, and to make mistakes, as long as you move forward with a positive attitude.”