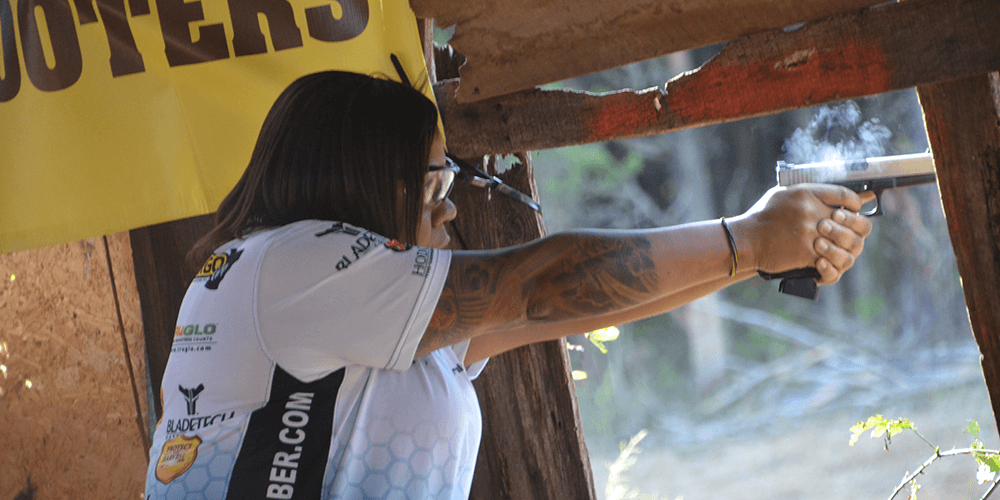 As a detention officer, Ursula Williams didn’t shoot much. “There was no post-training, just our annual qualification,” she explains. “I realized I need to be more proficient so I started taking myself to the range. Then a date told me about competing. I dabbled in it for about ten years, then got more serious about it about three years ago. A guy I know kept bugging me about shooting 3 Gun and Precision Rifle.”

In 2015 she called the guy and told him she wanted to shoot A Girl & A Gun Women’s Shooting League’s 3 Gun University. “He loaned me gear, took me to a range and ran me through the gauntlet. I didn’t even know about loading shotgun,” she laughs. “I shot that match with iron sights and came in second place for my first 3 Gun match! I was hooked.”

“Last year I went back to 3GU as a coach, which was a great honor. Troy Industries’ marketing director, Juli Brayton was there and said she’d love to have me be in a Troy jersey and at the end of last year I joined the Troy team. I’m beyond happy with them, they have phenomenal products, which I used and trusted even before joining the team.”

“Then at the Brownells Multigun Fall Fest last year I was a squad mom. I had two goals – I didn’t want anyone to get discouraged and I didn’t want anyone to get DQ’d. And we met those goals. I keep in contact through a Facebook group with the women who were on my squad. We talk about tips and tricks to prepare for Fall Fest like body mechanics, holsters, shell caddies, where mag pouches are placed on you.”

One tactic she suggests to help you learn is to keep the match booklets. “Keep notes. List two things to work on and two things you did great. It’s easy to focus on the negative but you need to focus on positive. Also, if you see who the match director is, and you attend another match where they are director, you can be pretty sure they have some sort of favorite thing that they’ll use at the next match, too.”

Ursula also has videos on Instagram. One video is a slow motion video showing her shooting rifle offhand while sitting on a rocking horse. “I wanted to show how little recoil my rifle has. The slow motion showed that arm fat and how it didn’t jiggle much,” she laughs uproarously. “That makes sense to women.”

Ursula has advice for shooters attending Fall Fest, especially first time competitors. “Don’t be scared, everybody there is there to help regardless of a jersey or not. Don’t think you can’t talk to the women wearing jerseys,” she laughs. “And watch the women not wearing jerseys, they can be kicking butt just as much. A Girl & A Gun brings in a lot of new women shooters. It’s the most welcoming group. So don’t be scared to try anything and just listen and learn. Ask questions. Some of the best knowledge I’ve gathered has been at their events. And then just have fun!”