Clearing a Stoppage with Tap/Rack/Back

Just as you know your safety rules, you must know your rapid clearing steps. When you are on the clock in a match or in a defensive gunfight, you want it to be second nature for you to clear any stoppage immediately to get back on target. You don’t want to hear a ‘click’ and be staring at your gun wondering what happened; you want to take immediate action, get the issue cleared, and get back in the fight.

No shooter, no firearm, and no ammunition is immune from malfunctions. They can seem to come out of nowhere and can be startling and confusing — and can create serious safety violations if mismanaged by the shooter. They are part of the shooting experience, so it is important to understand the two types of malfunctions:

Stoppages happen from time to time, but they can be minimized by having a proper stance/grip and using reliable ammunition. The most common stoppage is a failure to fire, which could be caused by faulty ammunition, an improperly seated magazine, or a casing that did not eject. In these situations, you’ll hear a ‘click’ instead of a ‘bang.’

CAVEAT: If you didn’t hear a ‘click,’ but heard a pop or poof instead, and/or felt or observed reduced recoil or no recoil during firing, then STOP. A bullet may be lodged in the barrel (a squib load) or there may be a delayed ignition of the propellant (hang fire). Keep your finger off the trigger with your gun pointed in a safe direction, and wait 60 seconds. Do not chamber another round! Firing into an obstructed bore will result in serious damage to both the firearm and the shooter. Remove the magazine, unload, and lock the slide to the rear. Notify a Range Safety Officer, who will carefully visually inspect the bore (do NOT look down the muzzle end of the barrel). If a projectile is lodged in the barrel, he or she will instruct you on how to take it to a gunsmith or armorer that has the appropriate tools and experience to safely remove it without damaging the gun. Be extra careful if you think you might have had a squib.

Most stoppages can be addressed with the Immediate Action Drill, a simple process to effectively deal with a minor issue. This drill includes three steps:

TAP – The “Tap” is hitting the bottom of the grip to seat the magazine. A failure-to-feed is possible when the magazine was not securely seated when the chambered round was fired and ejected. The next round in the magazine is too far below to be fed into the chamber, so the slide closes on an empty magazine. “Tap” the gυn by firmly gripping the frame in shοoting grip, indexed trιgger finger, muzzle down range. Using the heel of your support hand, pop the magazine base plate with a firm, solid strike ensuring the magazine locks into the frame.

RACK – The “Rack” is exactly that. Pull the pistol back into your torso and canting slightly inboard, still in a firm shοoting grip, with your trιgger finger indexed. Firmly grip the slide with your support hand, four fingers on the outside of the slide and thumb on the inside. Using a push-pull method, quickly push the frame with your strong hand and pull the slide with your support hand to fully rack the slide. Hopefully with the magazine seated, you have now chambered the round that the slide missed before and the gυn is back in battery. *Note: Do not ride the slide; let it slam home!

BACK – Get back on target and back in the fight. In years’ past, this step was called BANG, so you might hear old-school guys refer to the Immediate Action Drill as TAP-RACK-BANG, but we prefer TAP-RACK-BACK because you need to first assess that your gun is safe to fire. Keep your firearm extended with a solid, forward-leaning stance and proper grip. If reseating the magazine and racking the slide put your firearm safely back in battery, take a sight picture, focus on the front sight, and complete your trigger press.

TAP-RACK-BACK is a quick and effective solution to clear simple stoppages, such as stove pipes, missed empty cases, failure to feed, light strikes, etc. If you release the slide on the RACK and notice the slide is not fully locking or is “short” then you may have a double feed. Lock the slide to the rear, observe the jam in the chamber, drop the mag, clear the round, and reset the magazine. 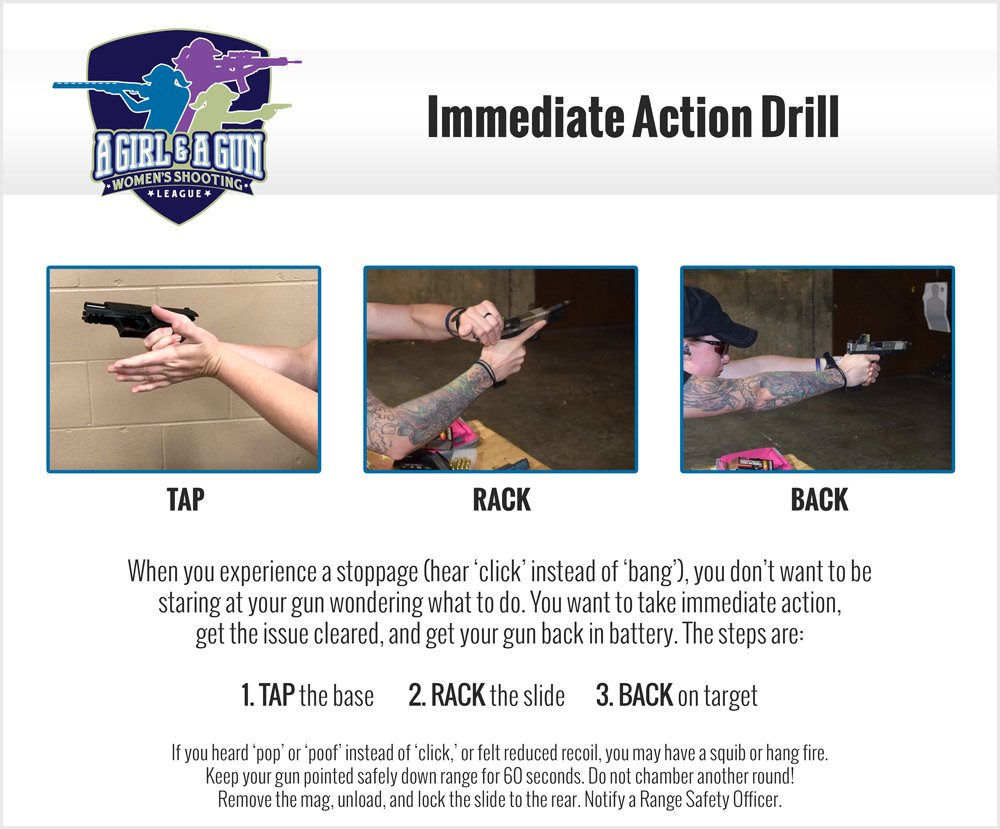