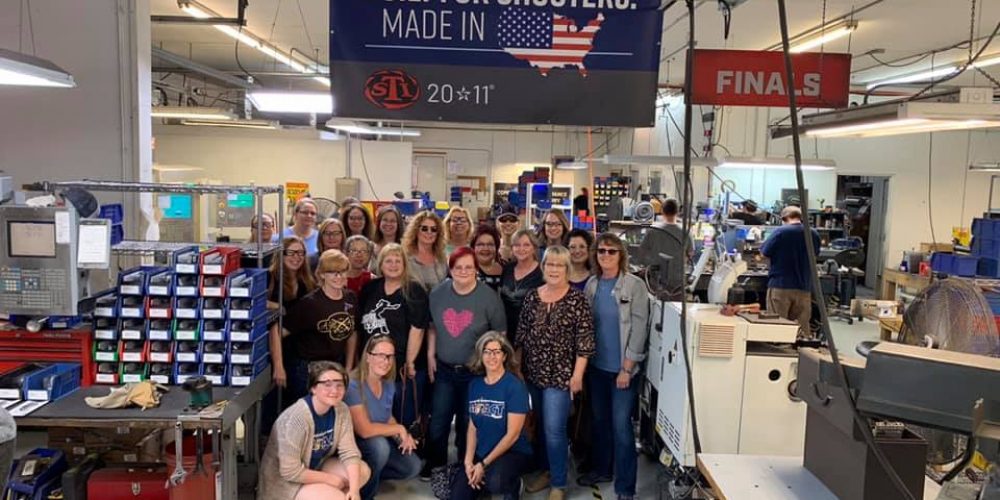 The North and South Austin chapters of A Girl & A Gun were fortunate to get to tour the STI handgun factory on a recent Friday in June. There were approximately 22 AG & AG members in attendance. Dustin Tackett, a regional sales manager for STI, led us on the tour.

STI is housed in two large warehouses in an industrial park in Georgetown, Texas. One warehouse fabricates slides, while in the other warehouse, located across the street, the frames are built and the gunsmithing done.

STI was founded by Sandy Strayer and Virgil Tripp. It should be noted that I am a die-hard 1911 girl, and for many years STI made a quality 1911s, however, much to my disappointment, STI no longer makes 1911s, focusing their production only on 2011s. I asked Dustin why STI no longer makes the 1911, and his answer was that “they” felt that the market was saturated with 1911s, so “they” decided to turn their focus to making modular 2011s. I told Dustin that I own three STI 1911s, all of different models, and that I am saddened that they no longer make the 1911. My STIs run flawlessly and I shoot them well – having shot them exclusively for both of Tom Givens’ Rangemaster instructor/advanced instructor courses and all of the advanced classes with the Massad Ayoob Group. My favorite STI 1911 is the Trojan with a short trigger and a slim magwell. Oh well, too bad for me. My options are a Staccato C (which is a single stack) or a 2011 with a short trigger put in it.

STI currently employs 69 folks to build their guns, with the employees being cross-trained on different aspects of building their guns.

I inquired as to whether or not STI still has their custom shop, because I recently noticed on their website that the custom shop was not accepting new orders. I was told that, in fact, STI does not have a custom shop anymore, and the two gunsmiths who used to build the custom-order guns were now working to help build their stock 2011s. So, the days of custom STI builds are of the past and you will have to send your gun to someone else for customization, should you so choose.

The grips for STI’s 2011s are injection molded, made at an outside facility, and finished in house. The bluing for STIs is also not done in house, although Dustin did mention that something is in the works to bring that process back in house. The magazines for STI guns are also not made in house.

We had the opportunity to look at several different 2011s in various configurations, including the Staccato C, the Staccato P, a DVC 3, a DVC S, and a DVC O. The DVC O, their race gun, was described by one of the ladies as looking like something out of Star Trek or Star Wars with the compensated barrel and frame-mounted red dot.

For their guns that come with iron sights, I was happily informed that Dawson Precision is the exclusive provider of sights for STI. In fact, Dawson Precision has sold more STI products than anyone on the planet.

We had a great time on the tour and look forward to STI bringing out some guns for an event day with the local A Girl & A Gun chapters. Thank you, STI.