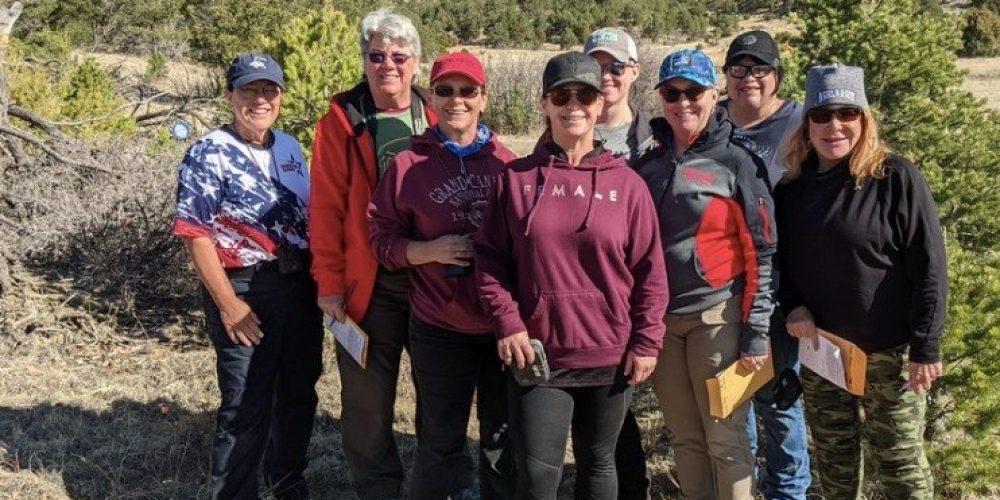 In May a group of AG & AG members decided that a week at National Conference was just not enough time for shooting together, and we were ready to accept another challenge from AG & AG leadership. Julianna Crowder & Robyn Sandoval are always thinking outside of the box, and Julianna put together an all-female squad at He-Man Multigun Nationals located at the NRA Whittington Center in spectacular Raton, NM.  And 7 women stepped up to the plate (six whom had just finished attending Conference).

AG & AG offered 3-Gun University 2.0, as a 2021 Girls Getaway. This event offered a unique opportunity for AG & AG members to attend training clinics (with a private coach) and shoot the He-Man match together over 3 days.  Cindy Coker of Team Troy was invited to be our coach and instructor.  She is a highly skilled & competitive 3-gun shooter, and she was able to individualize training for each competitor.  Cindy evaluated each lady and was able to help them with different aspects of their shooting.  She helped to refine the draw stroke, discussed engaging targets with slugs, working from barricades for long range rifle, and anything else that came arose.

We named our team She-Ra, who is He-Man’s sister and the Princess of Power!  The He-Man match is traditionally a True Heavy Metal match requiring a 12 gauge pump action shotgun, .308 rifle, and a 45 caliber pistol.  Our squad shot “Wee-Man” (or as we said Wee-Woman) with a .223 rifle, 9mm pistol, and a 12 gauge shotgun (either semi-auto or mag-fed).

One of the unique things about He-Man is that the Match Director, Denise Johnson, is female.  The stages she created were definitely challenging but oh so much fun.  It always seemed as if we were going uphill.  And for the “flatlanders” in the squad shooting at 7000 feet above sea level was taxing. The altitude definitely challenged your physical endurance and your mental acuity.

Another feature of this match in comparison to other multigun matches was that there were very few paper targets & the ones that were there were reduced sized! Most of the pistol was static steel so you really had to focus and make those shots count.  He-Man had multiple long-range targets off a variety of barricades and off-hand rifle out past 100 yards.  Our first stage had at least 8 flying clays going in all different directions.  Stage planning in this match was paramount for success.

Shooting matches bring out the best people and this was no exception. You’ll often hear me say that I love my 3 Gun Family and that is the truth.  We were given 360-second par times which is long for most matches, but we needed every second in this match.  During each stage you could hear the fellow competitors/AG & AG sisters cheering for one another.  That really helped when we were feeling fatigued.  At the end of each stage we were greeted with a cold bottle of water and your fellow competitor picked up your rifle and shotgun and carried them back to the car — how amazing is that team work?!  Shooting this match with this incredible group of ladies was so inspiring.

“It’s More Than Shooting” is one of the mottos that we often say in A Girl & A Gun and it rang true at He-Man! He-Man really was so much than shooting. We ate all our meals together (which were prepared by Julianna herself!) and most of us stayed in competitor housing.  Eating, shooting, and rooming together leads to a lot of laughter and so many fun stories and, of course, new friendships.

I highly recommend that you take part in one of AG & AG’s Girls Getaways if you have the opportunity.  These small-group retreats let you try a new shooting challenge, learn from expert instructors/coaches, spend time with AG & AG leadership, and leave with meaningful friendships. A Girl & A Gun provides its membership with so many opportunities.  So Jump On In!

By the way, the She-Ra squad is already planning our return to Whittington in 2022!