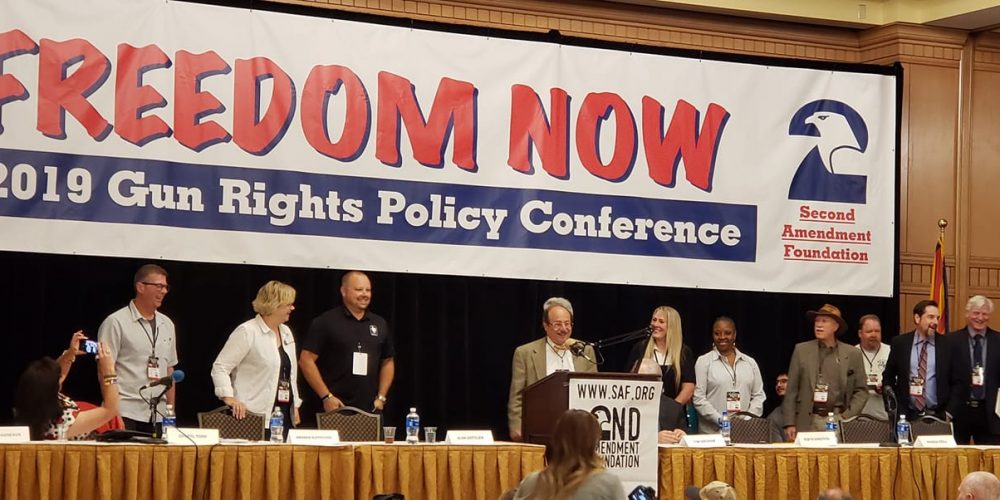 PHOENIX, Arizona — On September 21, 2019, Robyn Sandoval was honored with the 2019 Defender of Liberty award from the Second Amendment Foundation (SAF). Sandoval was one of several award recipients recognized during the 34th Annual Gun Rights Policy Conference (GRPC).

Alan Gottlieb, President of the Second Amendment Foundation, began the award segment by saying that it is his favorite part of GRPC. He recognized the recipients by saying that they “have done an awful lot of work… defending Second Amendment rights.” Gottlieb continued, “I want to thank all of you for your excellent efforts this year… in defense of our liberty. Thank you very much.”

Sandoval later addressed the crowd, which included more than 1,000 attendees in person and more than 3,000 viewers participating in the live stream online.

The following is the transcript of her speech:

My name is Robyn Sandoval. I am the Executive Director of A Girl & A Gun Women’s Shooting League, which is a membership organization that offers training programs for women at over 190 ranges nationwide, in addition to competitive matches and retreat-style events. I’m also the Texas delegate to the DC Project.

Gun rights are women’s rights. Women are overwhelmingly the victims of violence and sexual assault, usually because their attackers are bigger, stronger, and faster than they are. There are many options for self-defense tools, but the reality is that a firearm is the greatest equalizer.

Everyone in this room understands this point. And it’s nice to look out upon the audience and see more women at this conference than ever before. Women are making strides in our industry where our voice is more common.

Outside of our community, however, the woman’s voice is being marginalized and merged with other voices. The woman’s voice and the mom’s voice are stereotypically anti-gun. We are barraged with the headlines, “Moms ban together to increase gun control” or “Grocery stores become a battle ground for moms eliminating open carry.”

When I speak with members of Congress I tell them that the moms that demand to disarm us do not speak for moms like me.

Those who know me know that I have two boys and a girl, and they are the joy of my life. My 9-year-old daughter continues to battle brain cancer and completely lost her vision. I have been forced to have hard age-appropriate conversations with my children about cancer, disability, fear, and death. She’s a fighter, and I had to be a fighter, too!

I had the fighter mindset that I was going to face her cancer head-on and do whatever I could to keep her safe. I formed an army of medical experts, specialists, and prayer warriors to help us in this battle. I learned as much as I could learn and sought resources that could help her in the fight. Many of you relate to that mindset because it’s the same that we have as gun owners. You can’t bury your head in the sand of ignorance; you have to arm yourself with tools and knowledge to keep your children safe.

Last year I shared with this conference that I have been working to take the word “Mom” back. Moms Demand Action took that word from me, and I want it back. Moms like me recognize that I am my children’s first responder. I am there when police and paramedics are a phone call away. I’m there and equipped with tools and knowledge to protect my children. Whether it is home defense or concealed carry, I want the ability to try to keep my family safe.

And they’ve taken the phrase “common sense” from us, too. It’s not “common sense” to pay government fees and seek government permission for every private firearms transfer, criminalizing the activities we do every day.

It’s not “common sense” for the government to confiscate our most popular rifle that we use for competitive shooting matches, as well as defensive training.

Lawmakers calling for more gun control are focusing on law-abiding citizens, not violent criminals. They are trying to create more criminals by targeting you and me, forcing moms like me to give up my property and my rights.

Of course, lawmakers and the media don’t credit me with knowing the facts; they believe as a woman I’m just a pawn in the game. Just three days ago there was a story in the NY Times that said, “The gun industry is known for its savvy marketing strategies. It has courted women and children with firearm accessories and cartoons.”

It is increasingly frustrating that the media views my firearms advocacy as being brainwashed by the gun industry. It’s apparently believable that a man can knowledgeably choose to exercise his 2nd Amendment rights, but a woman must have been spellbound by savvy marketing. The voice of the mom continues to be marginalized and twisted. But I believe that it is in our nature to be fighters for our children.

As an example, look at the mama bear. The mama bear does not walk through the woods snarling or growling. She does not have claws out or fangs displayed. She is simply going about her day, taking care of her cubs. Her reputation precedes her and you know that she will not be an easy victim. You just know not to mess with her.

My favorite metaphor, however, is the mama bunny. Maybe you saw the viral video of the snake that tried to eat the baby bunnies. The mama bunny is not as fierce as the mama bear. She doesn’t have the size or strength or abilities, and her reputation doesn’t precede her in the same way as the mama bear. But the mama bunny used every tool in her toolbox to take on the snake. She bit and kicked, and even as the snake struck at her, she fought him with all her might until he let go of the baby bunny and slithered away. This is nature… that women are fighters and we can use any or all of the tools available to us.

My friend Elizabeth and I have been friends for over 20 years. She is a peaceful vegetarian, who loves camping and yoga. She always was supportive of me, but always a little uncomfortable when discussing my work. A few weeks ago she was at the park with her homeschooling co-op, when law enforcement swarmed the area in pursuit of an armed fugitive. She suddenly realized that they were there to apprehend a suspect, not to protect her children – that job solely fell to her.

She had no emergency action plan and no self-defense tools. Never in a million years did I have expect Elizabeth, of all people, to ask me to teach her to shoot. I gave her a private lesson last week, and she did fantastic, and is eager to do more training and obtain her license to carry. Next time she is faced with a threat she will have the confidence and training to know she is not an easy victim.

No. She just doesn’t want to be scared any more.

She wants to exercise her God-given, constitutionally-protected rights to self-defense. I invite you to join me in fighting misguided gun control proposals that have nothing whatsoever to do with curbing criminal violence, but everything to do with stripping us of freedom to wield the greatest equalizer. I invite you to welcome more women to the shooting community. I invite you to learn more at AGirlandAGun.org.

A Girl & A Gun (AG & AG) is a membership organization whose events have been successful stepping stones for thousands of women into the shooting community and fostered their love of shooting with caring and qualified instructors to coach them. AG & AG breaks barriers for women and girls in the area of self-defense and in pistol, rifle, and shotgun shooting sports by welcoming beginners to learn the basics of safe and accurate shooting and providing experienced shooters with advanced-level opportunities. The club has members in 48 states and hosts recurring Girl’s Nights Out at more than 190 ranges throughout the nation.