Porta-Potties And Other Shooting Match Necessities 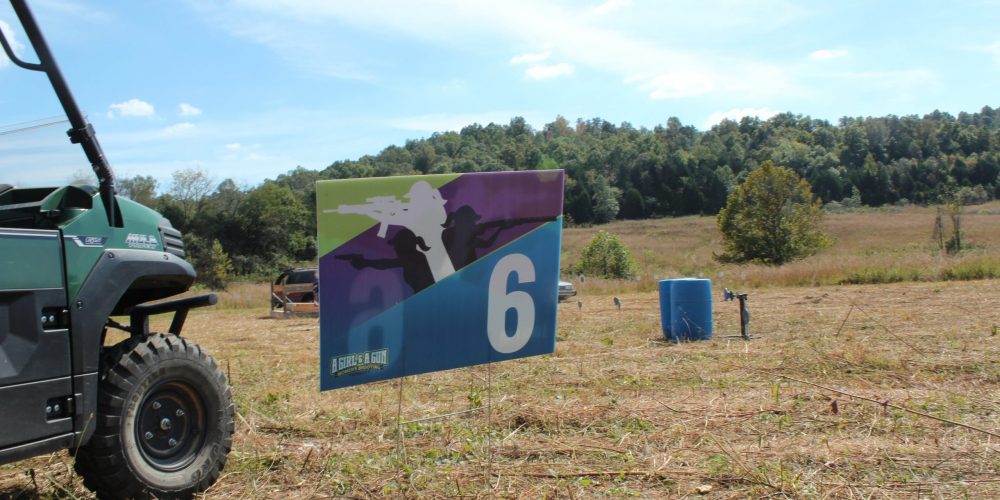 By Christi Conner Tate
Musing today: Getting older; 3-gunning while getting older; the value of porta-potties on the range during a match; and why women shooters are worth the trouble to have their own matches and own divisions. Maybe not in that order …
———————-

There are all sorts of realities that arrived for me as an aging gal and I deal with ’em as they come. I never thought I would care about access to a toilet or a porta-potty. It wasn’t a worry I could have anticipated when I was young and unworried about anything except running around with my hair on fire.

When I was a youngster, plop me in the woods anywhere, and if I had to use the restroom, well damn, a bush would do just fine. But at 52, with two blown knees, injuries from the fun I used to have and the fun I still want to have, combined herniated discs in back from building rock walls and tilling the earth by hand, I can’t modestly accomplish this “pooing in the woods” anymore.

This task is ESPECIALLY difficult while wearing, well, pants. Also a gun belt, 27 shotgun shells, 2 rifle and 3 pistol mags, a holstered Glock, and maybe long-johns because 28 degrees outside happens. Did I tell you matches happen in any weather? A thunderstorm? Try pulling up all of this in a thunderstorm. Hell, try pulling it DOWN.

So, if there are no porta-potties on the range for your natural terrain match, be patient with other gals and me, and deal with the fallout. First of all, a gaggle of girls leaving the stage to hop in vehicles and go pee is not good for the flow of your match. It screws up the shooting order for one.

Secondly, preventing the need for women to drop trou: It’s for your protection as well as mine. You should have porta-potties on your stage, Mr. CRO, so I don’t wander in the woods looking for cover to accomplish my post-coffee constitutional while surrounded by multiple courses of fire.

Thirdly, you are in constant danger being confronted by the sight of my bare bum. I don’t want to goof-up the flow of the match for other shooters, who do want not to trade the inconvenience of having me or my poopie pants. Yeah, yeah… if it were life during wartime, and it ain’t, you’d have to just get over seeing my bare bum in the sunshine, but fortunately I am being charged to engage in recreation. You wouldn’t tell a lady tennis player, “Go pee in the parking lot.” I don’t hear about lady golfers having to go behind the green.

One guy said to me, “You should plan your -uh- “time” better.” My response that morning? “The fact that you can, apparently, plan your poo time is TMI.”

If your match isn’t friendly to senior gals such as me, or girls who just won’t poo in the woods at any age, you should recognize that just because we are past our “pooing in woods prime,” or just “no”, most of us have an ammo and gun budgets that resemble the mortgage on a second house. You need us on your range.

I’m tough-skinned so I might not notice or care about impatience absent a suggestion that I stay away. Providing no porta-potties and then being pissed that I gotta drive ten minutes to find a facility is a sign. I’ll pay attention and just skip your event next time. I think there are men who feel the same way, so be careful when you don’t give a damn about the generous placement of range potties. As for us girls, just tell us you don’t want us. I, for one, won’t be mad at all. Not a bit. There are others that welcome our company.

If you run us off, it’s your loss. Despite the damned inconveniences of our plumbing, we’re not a total loss. Love us anyways and we’ll love you back.

Plus, sponsors like us. That is, most of them like us; however, some gun and gun accessory makers seem to have a marketing strategy that I don’t get. They might as well hang a “No Girls Allowed” sign on their business door. They use, for example, images that don’t resemble most of us women shooters. Their ads feature a cool, photo-shopped zombie-apocalypse-style barb-wired fence surrounded by several, obviously starved, half-dressed girls that are apparently the only type allowed to buy their stuff, or hang out with the men who buy their stuff, or maybe men are supposed to think that in the event of a zombie apocalypse, finally, half-dressed – albeit starving women – will flock to their sides because of this special gun or gear set up. Or maybe the message is that starved, half-dressed girls are just the only demographic group that NEEDs to buy their guns.

Maybe these women, depicted as obviously starving and without worldly belongings (clothes), more closely resemble the male idea of what women living in post-apocalyptic times would look like and what they would need to make it. (Dating you won’t be what they need, sorry.) Those poor girls.

In this case, the marketing message is that you should buy those poor, starving girls guns from their company, in advance, because that’s who’d these guns would be good for in the likelihood of post-apocalyptic times with dark skies and barbed wire every where. And it makes sense that they didn’t have much time to train with guns before the world ended and all, and that’s why one girl in the photo is muzzling the other girls … wait I digress. (Teacup hold? Really?)

Sturdier girls like me who wear clothes and need porta-potties can club zombies to death. Everyone knows that. I get it.

But stand back. We normal girls who actually eat are a cool new group to sell (a lot) of sponsors’ cool stuff to.

When I’m hunting, I go in the woods.

I mean GO in the woods. No Belt: easy peasy (the waders incident was very skill special… a story for another day). But the point is, even if I do poo in the woods while hunting, I am low maintenance. The most ammo Remington can sell me is a couple of boxes of shells and bullets, and one hunting outfit every two, three years, or five pounds, or so. I might use gun oils and cleaners twice a year on my duck guns and hunting rifle.

The UPS driver that delivers to my house said he started working out to better deliver ammo and gear to my house.

I shoot a lot, so I tear things up. Then I have to buy new stuff.

I’m never going to be better than middle-of-the-pack, but I have passion for the shooting sports. Women control the purchasing decisions and invest heavily in their passions. Sponsors other than gun companies and cleaning oil should look at shooting matches as an advertising outlet. A narrow demographic is the most target-rich place to market your cars, campers, ATUs, etc. I’ve bought two vehicles in four-wheel drive, three campers, coolers, chairs, all in the name of traveling and competing. I have consumed all of this in three years. I know I’m not alone.

And unlike our male counterparts who are delightfully inclined to Frankenstein everything before they’ll waste a dime buying something new and shiny, women are accustomed to buying once, crying once – every fashion season. A lighter rifle is out. Who cares that the other one works just fine, I want the NEW ONE. And cerakote it camo, please.

A lot of us with full time jobs can’t integrate DIY guns and gear into our schedules. We want packages. We want it out of the box and put together, so we have more time to do for our families. Most 2A-immersed gals are all about traditional values and those afford little time to build rifles and load our own ammo, though many of us manage that, too.

We are worth the investment in porta-potties — and what it takes to welcome us and market to us. There are many potential women competitors out there who would come out and shoot and buy stuff, but would wither in the face of any disapproval that they sensed while breaking into the sport. And those women take their wallets and their influence on the next generation of 2A supporters with them.

This is why women enjoy “all women” matches and women’s divisions.

We need all the participants we can get to ensure we have a playground where we can shoot as families. The presence of porta-potties is just a start.