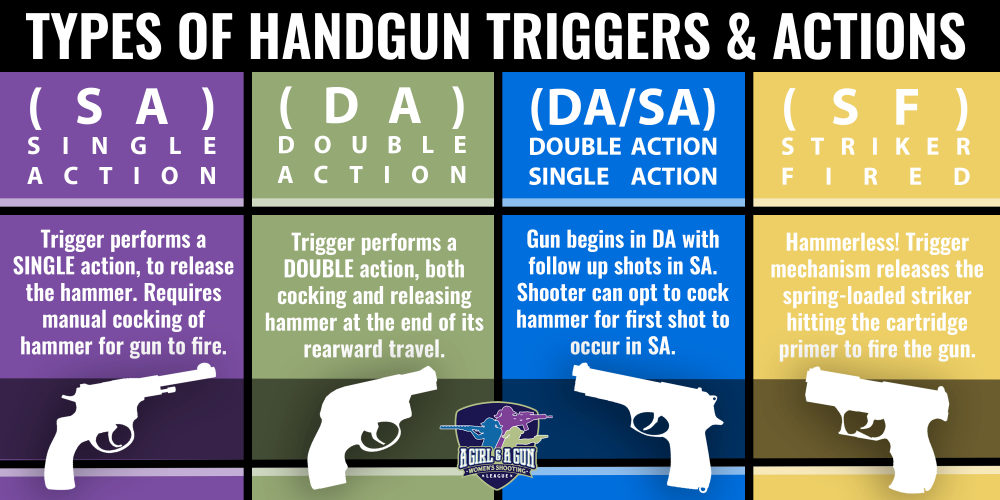 When selecting a new handgun, much emphasis is placed on ergonomics, proportionality, and budget, but how often do we consider action type in making this important choice? For a new shooter standing at the gun counter, the technical terminology and gun-lingo associated with action options sound like a distinctly foreign language filled with a jumble of acronyms and technical jargon. Often the action type is glossed over and discussed in over-simplified terms to generalize the safety benefits the salesperson or other family member may feel best suits the shooter.

However, even with the best intentions, the firearm’s action type, caliber, and scale can be grossly mismatched with the individual. For example, a 79-year-old woman with rheumatoid arthritis comes to a Girls Night Out event with her brand new snub nose, air weight, double action only, J-frame revolver. At the gun counter, she heard all about how this gun would be simple to shoot, the safety of double action triggers, how lightweight the gun is, and how a small grip will fit her hands. Sounds appealing? Thousands of women share a similar story only to discover this firearm requires grip and finger strength to manipulate the trigger, excellent vision to perfect very tiny fixed sights, and packs a punch in felt recoil. The snub nose revolver is an excellent firearm, though better paired with a different shooter.

WHAT IS AN ACTION?

An action is categorized by the functional mechanisms that enable the gun to fire when the trigger is pulled. For handguns, multiple action types fall into hammer-fired or striker-fired, some of which can operate in single or double-action and can also be available in revolver or semiautomatic models—confused yet? You would not be alone.

Approaching the gun counter with a little knowledge of the popular action types, how they work, and what their significant features are is vital to understanding what the machine requires of the shooter to function the gun safely. There are trigger action types better suited for competition, hunting, self-defense, or bullseye plinking. Regardless of experience level, every shooter should be familiar with their options and appreciate the merits of each. The next time you are at the range, try out a new action type and experience how the attributes work for you. You may be surprised by what you find you enjoy!

“STOP! It’s HAMMER TIME!” The beauty of a single action trigger lies in its simplicity. This trigger has only one job or action: to release the external hammer when pulled, thus firing the gun. For the hammer to release, it must first be manually pulled back, cocked, into position by the shooter through the cycling of the slide. In a revolver, the shooter utilizes their thumb to reach up and pull the hammer rearward until it clicks in an open position for each shot. In a semiautomatic, the hammer is cocked by the action of chambering the initial round or subsequent rounds when the side cycles pushing it back each time. If the hammer is not cocked, even if the firearm is loaded and the trigger is pressed, the gun will not fire. These triggers are famous for having very light triggers and very little travel. Less movement and pressure required to complete the trigger press means less opportunity to move the gun off target while taking the shot.

In this action type, the trigger performs two tasks, both cocking and releasing the hammer. Double-Action-Only incorporates an internal (shrouded) hammer that the shooter can not access. DAO firearms have a notoriously “heavier” trigger pull because there is more spring tension to overcome to enable the gun to fire. The trigger pressed rearward automatically draws the hammer back to cock it and then releases the hammer at the end of the trigger’s travel.

You guessed it, a DA/SA trigger action functions as a double-action or single-action firearm. Think of it as a hybrid. The initial load and make-ready procedure on a DA/SA firearm requires a final step of utilizing the decocker lever to safely lower the hammer to its resting position without firing the pistol. The first shot will have the classic long, heavy trigger pull of a DA gun. However, the cycling of the slide itself will automatically cock the hammer for the next shot setting the trigger action into SA, resulting in a short, light trigger press. It is critical to note that after the last shot in a string is fired, should the firearm still be loaded, the decocker must once more be engaged to reset the gun into DA mode. DA/SA guns also allow the shooter to opt for a SA first shot simply by manually cocking the external hammer before pressing the trigger. Options can be awesome!

Unlike the first three action types, this action does not have a hammer at all. Instead, it has an entirely internal and different firing system. The process of cocking the internal firing pin striker begins when the first round is chambered or the slide is cycled. When the trigger is pulled, the spring-loaded striker is released, hitting the cartridge primer and thus firing the gun. Sound familiar? Striker-fired handguns are also categorized as single-action because the trigger both cocks and releases the firing mechanism. Because this is an internal system without an external hammer or decocking lever, striker-fired guns can incorporate external safeties, trigger safety mechanisms, and other internal safety features.