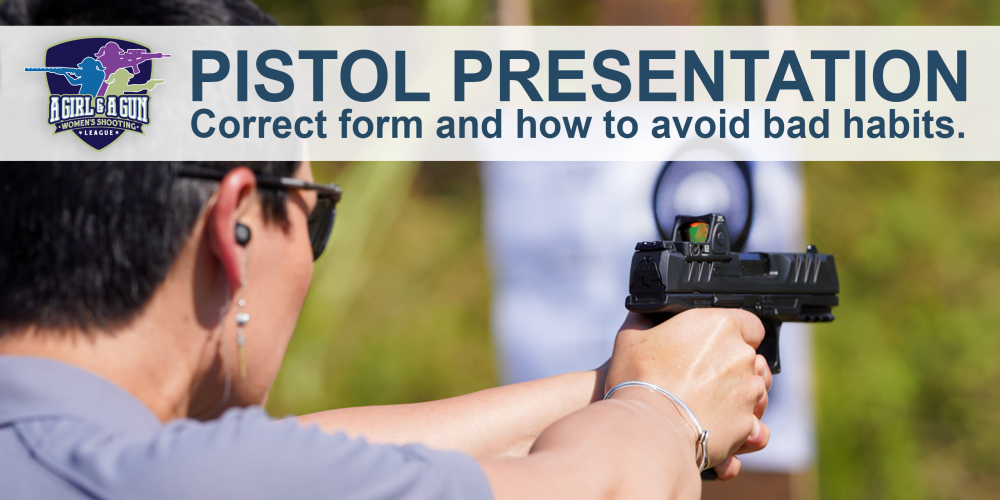 We spend a lot of quality time working with newer shooters on the handling and manipulation skills necessary to load, make ready, and shoot safely. These skills are vital to building safe shooters and the foundational skills we continue to build upon. One vital element often overlooked that leads to bad habits is the physical action between compressed ready and moving the gun onto the target, pistol presentation. Pistol presentation can either facilitate a well-placed shot or deteriorate the shooter’s stance, grip, and clear vision. Left unchecked, shooters tend to develop one of five common bad habits that can radically impact their accuracy and sometimes safety at the range.

Why is a correct presentation so important?

Safety can become a severe problem if pistol presentation is not performed correctly. Beware of movement at the wrist as the gun is moved onto the target. Any upward “flicking” or downward “dipping” motion at the wrists will alter the angle of the muzzle and potentially compromise the safe direction.

The shortest distance between two points is a straight line! For those looking to speed up their first-round hits, pistol presentation is one of the first areas we look at to improve efficiency. Excessive body movement is the root cause of bad habits concerning pistol presentation. The goal is to maintain a still, strong, and comfortable stance throughout the delivery of the gun on target. Using the tip of the pointer finger to lead the way, allow the shoulders to rotate and the elbows to straighten to enable the pistol to travel in a straight line while keeping the rest of your body still.

The only part of the body that should move is from the shoulders to the tip of your pointer/trigger finger – the arms. Some slight variations of this “line of travel” can be adapted for pistol optics, drawing from a holster, and rapid sight acquisition. However, at a novice level developing the skills that establish consistent presentation on the target is the main focus.

A compromised stance will undoubtedly impact how a shooter manages recoil. A well-built physical grip on the gun paired with a solid heart-forward-of-hips stance can make even a small framed individual capable of managing the recoil of a larger caliber gun. The stance is one of the first structural elements to break down during a messy pistol presentation and can lead to diminished recoil management. Excessive body movement at the torso, forwards or backward, and arching the pistol upwards or downwards at the wrist all cause the body to come out of alignment and structurally change its stance.

Shooting shouldn’t be a physically uncomfortable activity. Because the shooter’s stance is misaligned, the energy from recoil can become trapped in some regions of the body. For those who lean back during pistol presentation, the energy can be felt in the shoulders, while those who lean forward feel strain in their hips and lower back. Should the shooter have preexisting injuries in their neck, upper/lower back, elbows or wrists, the stance itself can be tweaked to align the body to protect rather than cause pain during shooting.

A correct presentation from a compressed ready position delivers the gun’s muzzle straight onto the target, with aligned sights efficiently and safely.

Fly Casting – When a shooter angles the gun’s muzzle upwards, creating an upward arch, muzzle angling upwards and then arching downwards and finally on target at the full extension of the arms. This upwards sweeping motion poses three distinct issues. The most important is muzzle control, as any movement off the target or safe direction is unacceptable. The second is that through this upwards arching motion; most shooters will lean their shoulders back, move their hips forward, and throw their stance into the classic “Charlies Angels” pose. Fly casting is also quite inefficient when it comes to time as well. The shortest distance between two points is a straight line, and Fly Casting creates excessive travel with the gun, adding unnecessary time.

Bowling – The inverse of Fly Casting, Bowling the gun onto the target creates a low-to-high arch. The shooter will begin in the correct stance and then dip the muzzle low and sweep the gun in an upwards arch, finally resting on target when arms are fully extended. Most shooters will lean into this downward sweep sending their shoulders forward and their hips back, landing them often into a deep squat or exaggerated forward stance.

Punching – Punching the gun onto the target tends to be seen in only a small group of shooters but is still worth discussing. Punching is when the gripped fists on the target drive the gun forward and pull back slightly before reaching hyperextension. This movement causes the gripped gun to bounce visually on target before settling enough to acquire the sights properly. Many shooters who Punch through the presentation can also be seen to tense their whole bodies in an aggressive full-body flex while simultaneously driving the gun onto the target and holding their breath. Though this does not typically compromise muzzle safety, it does generate a jarring motion that is hard to recover from and adds time to the click through the settling process of the sights.

Diving – Everything looks excellent, stance, grip, muzzle control. The shooter is breathing naturally and looks ready to go. When the shot timer beeps, they lunge forward, looking as though their whole body was pulled along by an invisible string lurching the muzzle towards the target. When they settle on target, their stance looks like they are diving forward as though into a pool. The problem with this is compromised stance but now also eye strain. Because this stance is so far forwards, the neck of the shooter is often an uncomfortable angle to keep the head up and eyes forward. In the Dive’s most exaggerated form, many shooters express discomfort in their neck and lower back from holding this pose for prolonged periods. They also notice that they are shooting, looking above the top rim of their safety glasses, thus inducing both a safety issue and eye strain.

Push Back – Bowling is to Fly Casting as Pushback is to Diving. While divers lean forwards, Push Back makes shooters hinge at the waist, driving their shoulders backward and away from the target through the presentation of the gun. A shooter will begin with a correct foundational stance, grip, and compressed ready position, but the action of moving the gun forward will sympathetically make them push their shoulders back. We again find ourselves with a Charlies Angels-style compromised stance. Neck and back pain is common as recoil management is the most challenging in this particular body position.

EQUIPMENT SHOWN IN THIS ARTICLE: