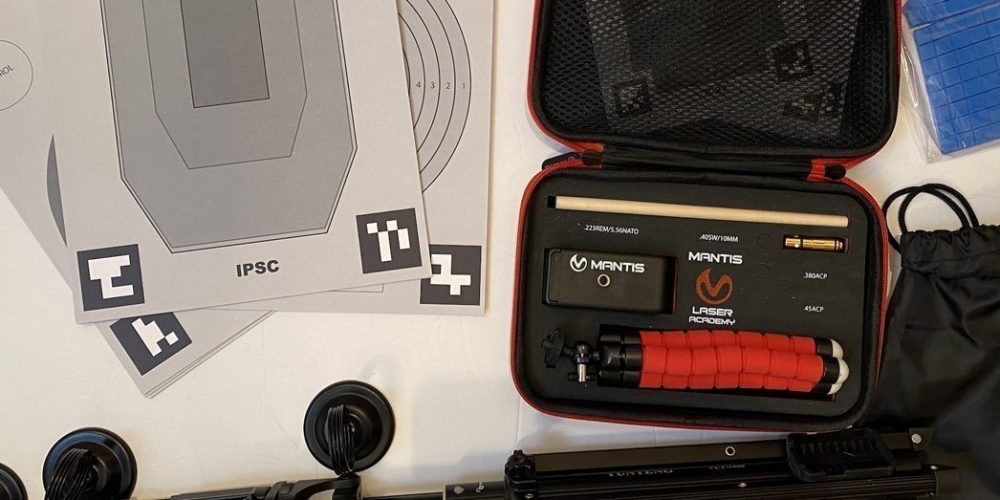 I don’t know about you, but dry firing can be pretty boring and monotonous. I’m always looking for something to make it more fun, otherwise I can’t ever even do it for 15 minutes.  So, when the opportunity to review the Mantis Laser Academy standard kit came up, it was at a perfect time. I wanted to practice and improve myself before an upcoming match about one month away. Having a goal in mind also helps to give me incentive.

The portable kit is $99.00 and has a small tripod with smartphone holder, small targets, laser cartridge and extractor stick, and a nice little carrying case to hold it all. The full standard kit ($149.00) includes all the portable items as well as a larger tripod with a smartphone holder and a remote control for your phone, larger targets and target stand holders.

I initially used a SIRT gun to do the tutorial and courses. The laser cartridge is good to use with the gun that you are used to but I wanted to try it first without having to rack a slide before each shot, so that’s why I started with it.

I clicked on the challenges and at first thought it was going to be the same boring thing – but it wasn’t! First of all, it gives you immediate feedback, announcing the score of each shot. Then once you shot one target and scored successfully to move on, you continue to the next challenge which could be one target, both hands, strong hand, or support hand. Then you changed targets which made it really fun. You would go from say an IDPA target with a fairly large zero-down-zone to a target with several small circles, so it required a little more concentration and trigger control. Before I knew it, I had breezed past that 15 minutes and didn’t even realize it.

It was so much fun, I found myself looking forward to the next day of practice!

I practiced many of the drills but then a specific one that I wanted to focus on was drawing from the holster. I know that’s one of my weaknesses, I’m not fast at it, nor fast at getting my red dot on target. I started with the regular drill of just drawing from holster. Then I added the one with par time. Wow! That was awesome! It really did push me, and I could see where I needed to speed up, and then I saw my times improve in just a few minutes of practicing. And it was so fun, I practiced even longer than the other drills.

A couple of things to note:

But the real tell – how did I do at that match I wanted to prepare for? I won my first shooting award, taking High Super Senior Lady!

I absolutely believe the Mantis Laser Academy helped improve my skills and I highly recommend it.