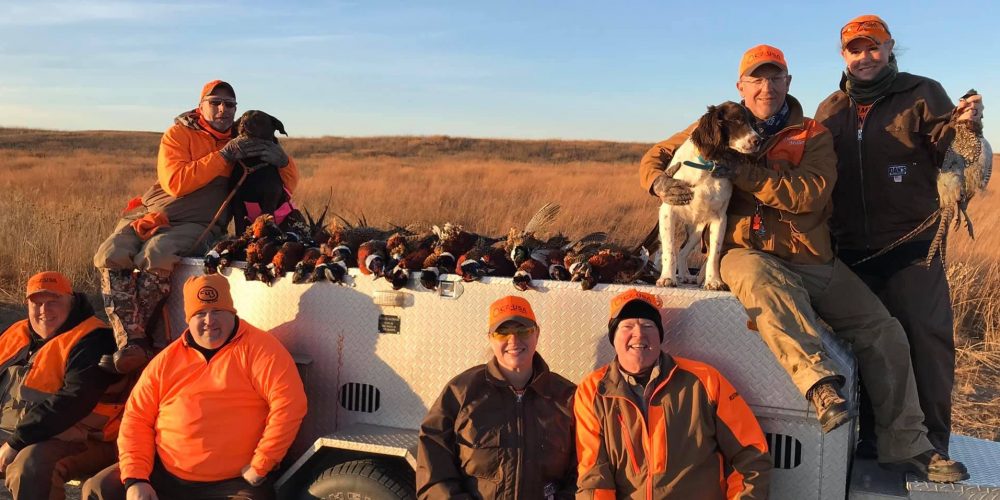 “Rooster!” was almost a battle cry every time that a male pheasant would take flight from the grass. We’d point our shotguns, take aim, and try to be the one who took him down! I was proud that over the three days in the field I was able to hit a few birds. It was my first pheasant hunt — actually my first hunt of any kind — and it was all captured on film.

Dave Miller, Shotgun Manager of CZ-USA and frequent guest on Gun Dog TV, invited Julianna Crowder and me to be a part of a televised hunt. We joined the group in Greensburg, Kansas, on a cold and windy weekend. I wasn’t sure what to expect, and came away with a lot of wonderful memories and lessons learned:

Grass is no joke. The biggest surprise was how difficult it was to walk across the terrain. I didn’t know that grass would be such a nemesis! The grass stalks were tall, dense, and spikey. It took a lot of energy and strength to plow through the hay-like forest. For the first two days, we were in 5′ grass, which would sway in the strong wind gusts and make me lose my footing. The fields were planted and maintained to attract wild pheasants, which makes the sport more of a challenge compared to fields or towers that are stocked with birds. I was grateful occasionally to find a deer path where a short stretch of grass would be smashed down from the wildlife. The field we hunted on the 3rd day gave us reprieve because it was more varied with some tall patches of grass and some areas with shorter grass.

Situational awareness. It was mentally challenging to pay attention to everything. I was constantly watching my step for gopher holes, roots, branches, and twisted grass or milo. I had to pick my feet up, marching through the field on uneven surfaces. I was also always watching the line of hunters to make sure I was in line with those on my right and left. I had to watch for dogs that were zooming by, too! I also had to watch my CZ-USA Quail Shotgun to make sure it was always in a safe direction (up) and on safe, while looking ahead for deer paths (that would give my legs a break from plowing the grass) and birds on the ground (who might be flushed up by dog). Of course, I was also watching for pheasants and to make sure one was a rooster (can’t shoot a hen), not too far in the distance (lost bird), and at a good height above the horizon (so I didn’t shoot too low near a dog). And in our case, we had to watch out for the camera guys behind us, and be mindful of what we were saying into the mics. #beep

Guide. We experienced two types of guides, which enlightened us that there are a lot of different guide personalities and styles. Our first guide was laid back and drove us from site to site, gave us instruction, and sent us on our way. He would drive the truck to the end of the field and give us a ride back so we could rest for a bit. Our second guide ran a tight ship and walked with the group to keep everyone in line. He collected every dead bird and managed the group by assigning where everyone stood on the line. He made us walk from site to site. Both of the guides were fantastic and it was nice to experience the different styles as a first-time hunter. We learned that it was acceptable to offer them a nice gratuity.

Gear. I was glad that I had my Dan’s chaps to protect my legs from the burrs of the grass. Base layers helped keep me warm in the cold, but restricted movement and made pushing through the grass even harder, so I ditched the thermal pants after Day 1. I was glad to have gloves, but they didn’t fit well (too long in the fingers) and were not very warm, so next time I will bring better gloves. My boots were waterproof hiking boots, which were lighter weight than hunting boots, and I was glad that I had worn them to the range a few times so that they were broken in. I also made sure that my boots dried thoroughly each night, and I wore good socks (mine were made from buffalo wool to keep me extra warm). Of course, I wore a blaze orange hat required for upland hunters (mine was a super-cool CZ-USA orange and camo flame ballcap), and cold weather gear to cover my neck, face, and ears. I borrowed eye protection that was tinted orange (you can also use yellow) because it really makes everything much more visible in the grass. I also borrowed a mesh vest with ammo pouches and a bird pouch. Some of the guys had fancy jackets or vests that had all of the necessary pockets and pouches.

Physical fitness. My hip flexors were sore from high stepping and plowing through the grass. As a perk, I think my thighs were thinner after three days in the field. #winning! Julianna’s right bicep was taxed from holding her shotgun up all day with proper trigger discipline. Cardio prep was necessary because we spent a lot of time walking uphill (both ways!) through tall grass — it got our heart rates up! We tried to stay hydrated (well, kind of, see below). It was easy to eat well at Upland Inn Hunts, and I usually carried a protein bar during the day to keep me going.

Etiquette. It was critical that I knew my shooting zone, the area in front of me where I could engage a target. I also learned that we needed to be quiet so birds didn’t hear us and run or bed down (pheasants’ ears are very large and they can hear really well). It’s proper etiquette to unload the shotgun when you come to the end of a pass. We always made sure that we loaded our guns facing in a safe direction (forward, not down, because of the dogs). We learned that pheasant hunting is a team effort, so you may not get your dead bird. The dog will usually retrieve it to its handler, and someone will store it. Some birds take multiple people to bring it down (the wind was so strong on our first two days that it scattered the shot and sometimes it took 2-3 hunters to get it down). It was helpful when those on the road, who could see pheasants running into the grass, would mark the area and pass the news down the line so everyone would know where the pheasants might fly. As tempting as it was, we didn’t shoot any bird that were running; it’s proper etiquette to only shoot them in the air.

Dogs. In our group, there were a lot of dogs, including pointers, labs, and bird dogs. It was nice to have a mix of pointers and flushers. Personally I liked the pointers because they gave me a heads up that a bird was nearby, but the flushers were key because they raced in and got the rooster to fly! The dogs work the line back and forth in front of the hunters. Sometimes a dog would get on a scent and go too far out and flush birds that were out of distance, so handlers whistled for them or beeped their electric collars to get them to come back closer to the line. The dogs had to stop for breaks and water, and I was grateful to take a short break, too! The dogs got really cut up on the grass, so some wore neoprene vests to protect their bodies. All of the dogs were highly trained and well loved; some were outside dogs and some were family pets.

Female-specific. We were on a hunt with all men, and we learned that this is often the case. Only about 10% of the hunters in the area were women, so we wanted to encourage more ladies to get out there! One area of concern for us was that there were no potties in the field and we couldn’t be as subtle as the men to take care of business. It’s hard to squat with all the gear, especially in high wind and freezing cold! We wanted to stay hydrated, but also worried about drinking too much water. Next time we might bring a portable potty seat to store in the truck with the guide in case it was needed. Julianna and I agreed that next time we’ll wear sports bras because we struggled with straps under all of our layers. #tmi

Guns. Before going out in the field to hunt, I went and shot a few clays with the shotgun that I was going to be using. It was important that I was proficient with the shotgun, so that I could be safe and successful.  I was glad that The Quail model was a lightweight over/under because I was carrying or holding it all day long. I switched hands occasionally to give my arms a break, while making sure to have good muzzle and finger discipline. There were a lot of different types of shotguns used, so you could bring a semiauto or side-by-side if that is most comfortable for you.

Venue. Hunting pheasant is an expensive sport, and there is a lot to take into consideration when choosing where to go. At Upland Inn Hunts, we had housing, meals, guides, bird processing, and excellent hunting lands. Although the weekend was challenging, I wouldn’t have wanted my first hunt to be anywhere else. I was grateful to have the natural terrain without the “luxury” feature of stocked fields and limit guarantees. I was proud of myself for having a legitimate hunting experience.

Birds. I had seen some mounted pheasants as trophies on a wall before, but nothing prepared me for the moment that I held my first kill. I was walking through milo and I could see some pheasants on the ground up ahead. The dogs were heading their way, and all but one took off. I positioned my body and shotgun so that he was mine the second he cleared the horizon — it was the only round that I fired on Day 1 — one shot took him down, which was unusual in the high wind! One of the dogs took it to its handler, and they passed it down the line to me. He was so beautiful! His feathers were iridescent and shimmered in the sunlight, and it almost looked like mermaid scales that transitioned in gorgeous hues of green to blue to purple. His eyes were closed. He was still warm. I appreciated him for his beauty and for what he provided for my family (I have pretty tail feathers in my office and food in my freezer). It was a powerful moment in a weekend that taught me a lot about adventure, strength, conservation, nature, responsible hunting, friendship, and life. I’m grateful to have the memories of those three days that will be with me forever!

Check out our three episodes, “Wild and Windy,” “Upland Paradise,” and “A Day to Remember” on Gun Dog TV on the Outdoor Channel! Special thank you to the hosts and crew of the show, everyone at Upland Inn Hunts, and our friends at CZ-USA.