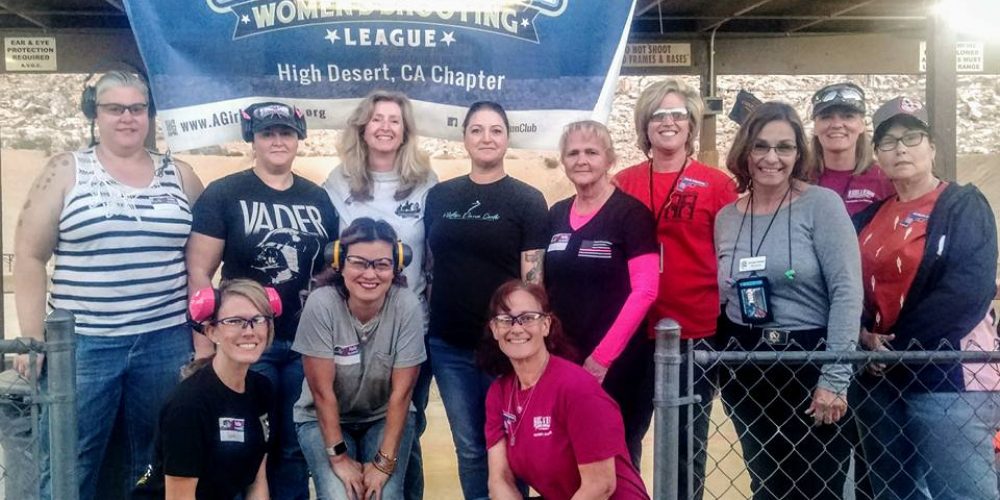 In 2017 Julie Creason made her first trip to SHOT Show. She had moved to the high desert (Victorville, Apple Valley) area of California from the Napa Valley in early 2000, and “Once the kids were old enough I looked to do something different.” Julie’s dad had guns so she grew up around them but was not active with them. Then she attended a Women on Target event put on by the Lion’s Club. “We have the only Lions Club International that brings in money for charity through a shooting range,” she brags. After the class, “I was hooked,” she says. “I could do this for the rest of my life.” After that she asked for a shotgun for her birthday instead of the usual jewelry. She started shooting trap, taking every NRA instructor class she could, and within a year and a half became the clinic director for the NRA programs. “I’ve probably trained over 1000 women in the past three years,” she says with amazement.

“I love that women come in very frightened and after eight hours they are completely transformed. They aren’t afraid any more, because now they understand,” explains Julie. She gives an example of a woman who refused to let her sons shoot. Julie paid for her to come to a Women on Target clinic. By the time she left, her whole opinion had changed, she wasn’t scared anymore. “She called me before Christmas and said, “We did all our Christmas shopping at places like Bass Pro Shop,”” laughs Julie, and she had bought her boys BB guns. “It took one day of knowledge and education to be truly informed. And it completely changed her family.”

Then Julie realized that there are two ranges in her area, which is great, but they mostly offer basic NRA classes. “I knew there had to be more we could do,” says Julie. So she went to SHOT Show. There she attended the A Girl & A Gun Women’s Shooting League (AG & AG) Meet and Mingle. “I was done. I knew immediately that we needed A Girl & A Gun here in the high desert, and that our demographics would just click. The whole concept of the sisterhood sold me.” That’s because, Julie explains, one day she was working with a group of women on the Winchester program. “It was so windy, dirt was flying, targets were flying. We ended up just going in the clubhouse and socializing. Women were saying things to each other like, “I’ve been on the range with you for six weeks and I didn’t know you were a nurse,” or “I didn’t know you raise horse.” Things like that. I realized these girls want to connect. So that sisterhood aspect was very important to me.”

In July of 2017, Julie started her chapter. Julianna Crowder, AG & AG Founder, was able to be there and help launch the first Girls Night Out event. “It was the first time I had seen her since meeting her at SHOT. We had 45 girls on the range and there were about seven of us that shoot and train together. We were so mesmerized by the way Julianna taught, that none of us wanted to shoot, we just wanted to watch her. There was woman in the military there who need to practice to re-qualify. She was nervous but Julianna just talked to her about the little key things to think about. Then she goes over to a woman none of us knew, who was a first-timer and had never even held a firearm. We watched Juliana just stop and talk to her, ask questions, get to know her background before she ever put a firearm in her hands. By the time it was over, the woman was crying – not from fear but from pride. “I did it!” She said.”

“The next day at our Women on Target class, I saw how our instructors changed their teaching methods based on how they had watched Julianna teach. She’s amazing.”

Julie also talks about the relationships she has made in the past year. “In any other sport that I’ve ever done in my entire life, this is the only one that I’ve found that women at every level want to help you. I’ve been Facebook friends with some of them and met some of them and in one year these relationships have transformed to where they treat me like their next door neighbor. They will always ask how they can help. I want to bring that back to my girls, to know that whether they stay where they are at or if they grow to a higher level, they will be treated the same. It’s so inspiring,” she beams.

This year Julie went to SHOT Show with a completely different mindset. “Last year I went with a “What can I bring back” attitude, this year it was “What can I grow?” And I made it a point to thank all the AG & AG sponsors.”

While most people attend SHOT Show to find the latest and greatest guns and gadgets, Julie’s find was a women’s shooting league that brings fun and sisterhood to the women she teaches and shoots with. “To go last year and not know anything about A Girl & A Gun, and then to see them at SHOT Show this year launching new things to keep us challenged and excited, is phenomenal,” she beams.