In Quest of the Rifleman’s Patch: Ladyseed Marksmanship Clinics 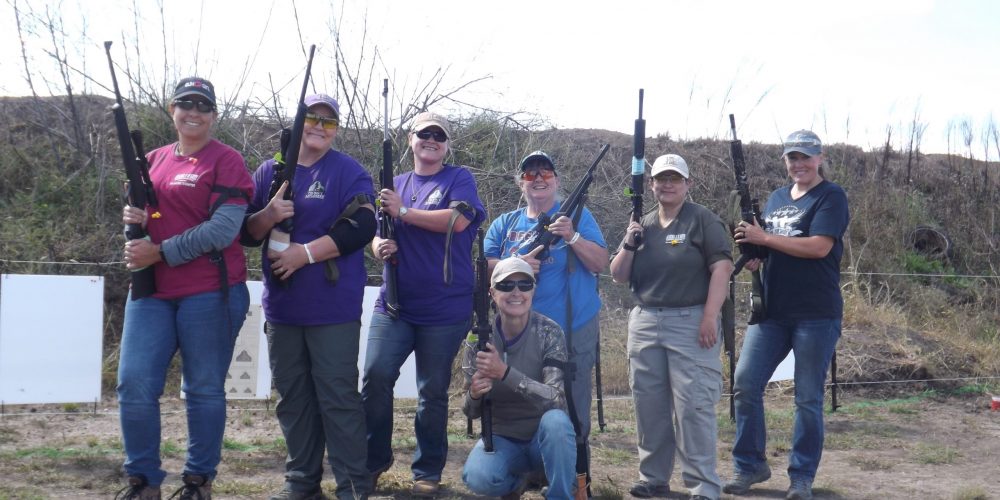 Last September I had another fabulous opportunity to take the Ladyseed Marksmanship Clinic offered by Project Appleseed in my hometown of San Antonio. Since I took my first class two years prior and missed the previous year due to a work commitment, I was ecstatic to make another attempt at earning the coveted rifleman’s patch. What I knew from the previous instruction was that, win or lose, I could take this class year after year and still learn, increase my rifle skills, and enjoy training with a wonderful group of people.

Ladyseed is a ladies-only rifle class taught by a group of dedicated volunteers from across the country to impart rifle marksmanship knowledge intertwined with the story telling of the revolutionary war. In order to become an instructor, not only do these volunteers have to obtain their rifleman’s patch (more about this later), but they have to pass a series of written, oral, and hands on tests in addition to providing assistance with at least 5 other Appleseed events. This year we were blessed with female lead instructor from Dallas, a married couple from Florida as assistant instructors, and a cadre of other volunteers from all age groups and skill sets. When the class started we had one Project Appleseed instructor for every two students!

This class had about a dozen attendees from San Antonio, New Braunfels and Austin. We all met at the range early on a sweltering south Texas morning. For our first shoot of the day, with minimum instruction and without warmup, we were asked to shoot the red coat target which simulates shots between 100 and 400 yards and includes Morgan Shingle mimicking a headshot at 250 yards. Being my second class, I was sure I would fly through the class without very little instruction. Not surprisingly, I was wrong. The first instruction of the day was directed at me to “stop dragging wood” – a term used when your trigger finger drags along the side of the stock causing the rifle to move during the shooting sequence and therefore miss your intended point of aim.

After the initial string and throughout the first day, we were given instruction on the rifleman’s four safety rules, how to put your rifle in a safe condition, the six steps of taking a shot, the steady hold factors, sling use, different shooting positions, natural point of aim, minutes of angle and much more. In between strings of shooting and instruction, we were told the story of the events from April 19, 1775 surrounding Lexington and Concord during the revolutionary war, including what British actions lead to the rise of the conflict.

The personal stories of the revolutionary war continue to amaze me in that a relatively small group of citizens whose liberties where being infringed took it into their own hands to defend their beliefs. With the quality of firearms available to them, their shooting skills had to be exemplary not only to defend their families, but also to provide food for their families on a daily basis. Their belief that they could make a difference is outrageously courageous and honorable. After taking this class, I spent a bit of time researching my own ancestry and found that I am related to Samuel Muncy of Virginia who was a member of Captain Abraham Lincoln’s (the grandfather of President Abraham Lincoln) company of militia and his son Luke Muncy who joined the Revolutionary Army in 1777 when he was 18. It warms my heart to think that my ancestors fought to make our country independent.

By the start of the second day, we were two participants short after the heat roasted them the prior day. The rest of us marched on as most of the initial instruction was complete and we were focused on improving our individual skills. For me and my goal of the rifle marksmanship patch, the Appleseed Qualification Test (AQT) was the golden ring. The AQT is shot in 4 timed strings of ten shots each from various positions of standing, seated, and prone including reloads at 25 meters with smaller targets at each successive string. A perfect score is 250 points. Students with 210 points earn their rifleman’s patch. I was shooting my custom Legion Firearms AR-15 in .223 with an 11 inch Troy Industries VTAC Alpha Rail and Nikon P-223 3×32 BDC Carbine scope. Nothing fancy, but a rifle I adore because it was built for me back in 2013 to my specifications. In addition to AR-15s, other ladies were shooting pistol caliber carbines and .22 rifles. I was pretty consistent with my shooting and the instructors were really supporting my run to 210 through their fantastic teaching tips, but could not quite get me over the challenging score. Toward the end of the day, my bolt carrier group got “gummed up” (technical gunsmithing term) and required me to sit out for a spell while one of my instructors, without hesitation, loaned me one of his bolts to finish the day.

While resting between sets and hydrating, our instructors from Florida, Chuck and Kim, brought out their replica of the Brown Bess which is the muzzle loading, flintlock rifle used by many of the British soldiers during the revolutionary war. The smoothbore musket propels a .75 inch lead ball at 1,750 feet per second a leaving gaping hole in whatever it made contact with. At over 10 pounds and more than 62 inches (5’ 2”) tall, not including the bayonet, wielding this rifle is not easy. I cannot image carrying it through harsh war environments. The ladies in the class were given the unique opportunity to shoot Brown Bess. I am 5’ 7” and to hold this is rifle is both empowering and frightening at the same time. After Chuck loaded the musket and set up the powder, I held the stock as tight as I could against my shoulder. It felt like an eternity pulling the 9 pound trigger, but eventually I blasted the slug down range missing the target low due to my lack of arm strength to keep the heavy, sightless rifle on target during the trigger pull.  I am happy to say it did not knock me off my feet and I would happily shoot Brown Bess at any opportunity provided to me.

My rifle malfunction and the heat left me unable to pull out the points I needed to earn the rifle marksmanship patch this weekend. Even though I did not make my goal, taking this class was well worth the time and money invested. I always enjoy spending time with my shooting sisters and the quality of instruction from this group of volunteers is outstanding, not to mention they are all wonderful human beings. Shooting Brown Bess was definitely the highlight for me and I did not leave this event with my head hung low. I will be taking the Ladyseed Rifleman Clinic again and I am confident that one day the purple, 13 starred and 13 striped patch will be mine.

A Girl & A Gun encourages all chapters to host a Ladyseed event at your host range. Chapter Facilitators can request more info here (login required).