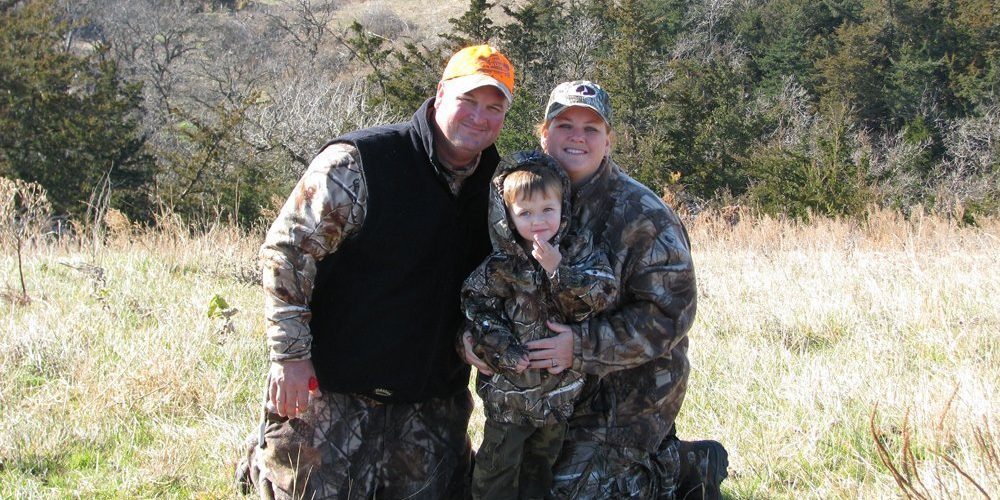 There is nothing more special to me than spending quality time with my family in the outdoors.

I started hunting with my family when I was 14 years old. We traveled to GA, SC, and AL. We were all new to it at the time, so there was quite a bit of a learning curve for us all. My Mom and I would sit in the tree stands together. I remember some very cold mornings, in the beginning, when we would watch ice melt off the stands. We didn’t have the greatest land to hunt on back then, so what we saw was very limited. Even so, those were some of the best memories.

When I was 17, I killed my first buck. I was sitting with my Mom that afternoon when 2 bucks came out at the same time. We argued over which one was the biggest deer. She insisted the one on the left was the bigger one, and I insisted the one on the right was. Every time I would go to take my rifle off of safety, she would say, “Wait!! You need to shoot the one on the left.” Finally after 3 or 4 times, I told her that I made my decision and this was the deer I wanted to mount for my first buck. So the next time I took the rifle off of safety, she whispers again… WAIT!! “Now what?!,” I said. She said, “Ok, you’re right. That is the perfect deer.” We still laugh about that day and that hunt. It’s a miracle with all of the talking my Mom and I did in those tree stands that we ever saw a deer, but I wouldn’t have changed a thing!

A few years later I married my husband, Mike. He was quite the outdoor enthusiast and taught me so much about wildlife. Through the years we worked together managing several pieces of property and eventually bought our own small farm in Georgia. Once I started to understand more about wildlife and habitat management, I started to appreciate hunting that much more. We plant year-round food plots, put out supplemental feed, plant wildlife trees, do prescribed burns, and so much more. It is definitely a year-round job, but it is something we have always enjoyed doing together.

In 2007 we welcomed our son, JT, into the world. We knew we would have to make some changes to our lifestyle, but we wanted to include him as much as we possibly could. Everyone told me that my hunting days were over once I had a baby. Maybe I’m not your typical mom, but I felt like as long as it was safe, I wanted to include him when I could. He was riding the woods with us as a baby and loved it! He was 10 months old when I took him to the tree stand for the first time. He was too young to know what was going on, but he enjoyed the scenery and was completely content. I even harvested a deer with him that day. I still have pictures of him watching us load the deer up and prepare the meat.

JT continued to sit with us as he grew older. As a little boy, we worked with him with small BB guns and eventually moved up to larger guns as he grew. As a NRA Instructor, gun safety is a big factor for me. We worked with him often, making sure he knew proper handling of the guns and about safety rules. We also had him on the range frequently, verifying he knew where to aim and that he was accurate with the firearm that he was using. He harvested his first buck at the age of 5 alongside his dad. The smile on his face was priceless. There is nothing more rewarding than that!!! He is 10 years old now and continues to enjoy the outdoors.

As a parent, I love that my son continues to appreciate all that the outdoors has to offer. Hopefully he will pass the knowledge we have shared with him to future generations. 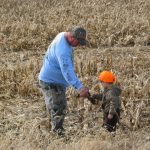 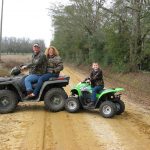 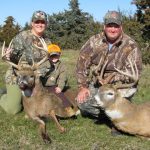 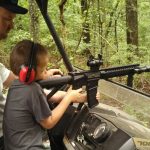 Katrina Reed lives on a small farm with her husband and their son. She works full time at the scrap metal recycling center that she and her husband started. When she is not working, she enjoys spending time outdoors with her family fishing and hunting. She is a regular pistol and 3-gun competitor. She can be seen as a contestant on Ammo and Attitude Season 7. She is the Facilitator of the Tallahassee FL AG & AG Chapter.