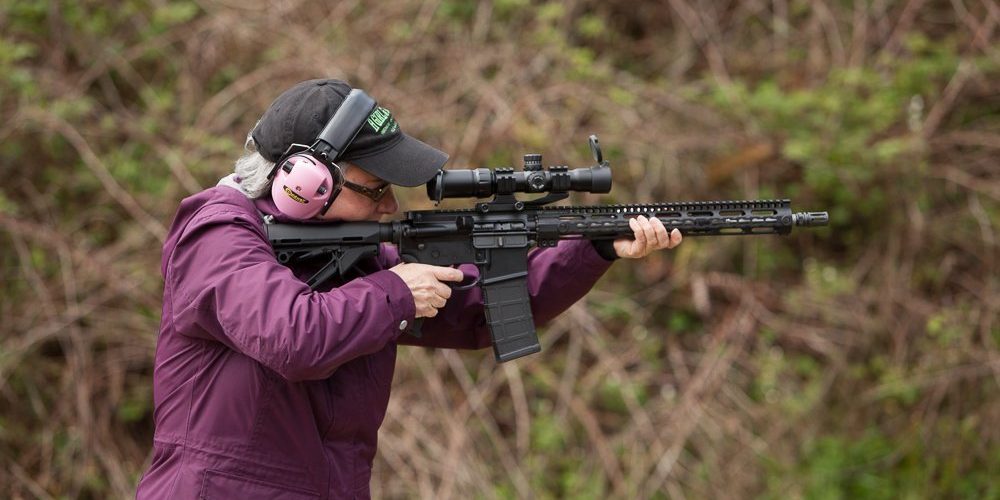 As I was running down the hill trying to keep from falling while holding my rifle in its sling to keep it from swinging too much, my thoughts flit around – how the heck did I get here?!

When I was nine years old, I got Rheumatic Fever. I was scrawny, sickly, and pale. I spent 4th grade in bed. By 5th grade I could go back to school, but I had to rest a lot. At recess, at lunch, after school. By 6th grade things were getting more back to normal but I still had to be careful. I wasn’t supposed to get too excited, let my heart race, let the adrenalin flow. I worked a lot at staying calm, I could even slow my heart rate by thinking about it. So I also avoided things that made me nervous or scared.

After I went into 7th grade when I was 12, suddenly my knees, thumbs, and elbows became painfully swollen and red. Now I had Juvenile Rheumatoid Arthritis. That was the end of any kind of running or jumping for the next six years. It basically became a habit, trying not to hurt and trying to stay calm. A habit that carried on long into my adulthood.

Fear took over a lot of my life. I flew on an airplane a couple of times but would dread it for weeks ahead of time, getting cold sweats (all I could think about was just dropping from the sky. Silly, I know, but that didn’t make it any less of a real threat to me.) I passed up some fun times because I let that fear take over and just didn’t want to experience it.

Fast forward several years, the JRA went away, my heart seemed to be just fine. But I still had the old habits. Then I married my husband in 2005. He kept telling me, “You need to get a gun.” “Why?” I asked. “So I can throw it at someone because I don’t know how to use it and I’m scared of them?”

He slowly worked on me, introducing me to a bolt action 22, then a youth shotgun. I finally decided to take a basic pistol class. This was fun! So I decided to try Bullseye League. I wasn’t good, but I enjoyed it. You just stand there and shoot, I can do that. I knew I never wanted to move as I shot.

After a couple of seasons of that, I learned we had a local A Girl & A Gun club in Onalaska, Washington, ran by facilitator Jennie Van Tuyl. So I joined it. Imagine my shock when Jennie started pushing me! I had to move a little, walk forward, walk backward. I was terrified! But I did it. But that’s all I wanted to do. I had no desire to compete while moving. I was bad enough at competing while standing still with Bullseye.

Then on my third or 4th club clinic, we had to practice shooting in the dark with a flashlight. As I was holding my gun with one hand, and the flashlight in the other, I thought, “I am SO far out of my comfort zone. SO FAR OUT!” Then suddenly it hit me – If I can do THIS even though I’m terrified, then I can get on a stupid plane.

A few months later my husband and I flew to Hawaii to celebrate our 10th anniversary.

I decided to start competing in IDPA and 3Gun. I shook so badly every time I shot because I was so nervous. But my heart didn’t explode. And yep, I still sucked as badly as I did with Bullseye, but again – I was doing it. And I loved it.

The next spring, April 2016, I got on a plane to go to the AG & AG Conference in Texas. Flying and checking in bags and guns all made me just a little nervous, but we simply followed the rules and it went off without a hitch.

Then the opportunity came up to attend Brownells Multigun Fall Festival. I jumped on it.

Over the summer, another opportunity came up – a chance to attend a conference for work in St. Louis, something I would have simply avoided before. But I confidently made the airline reservations and two weeks before the Multigun Fall Fest I made that trip. It really stretched my nerves though as we were delayed on the tarmac by lightning and took off flying through a lot of turbulence for about ½ hour. But again – I did it.

Then came Fall Fest this past weekend. I was a little shocked. What? We’re doing hard, long stages? We’re actually competing against some of the top women shooters in the nation? What was I thinking?!

As I said, I’m not very good. I’m not strong, I’m not athletic, I have poor eyesight, poor depth perception. I’m now 57 years old. I totally expected to end up finishing last, so anything above that would be a bonus.

I attended Kelley Moore’s presentation on the messages we tell ourselves. I decided I would focus on what I did right during the competition instead of beating myself up for what I did wrong. So I looked for those things all along the way.

1. I was able to hit a few steel plates. Not many, but I hadn’t been able to hit them before because I seem to let them get in my head.

2. I hit a pop-up target for the first time. Previously I didn’t seem to be able to see quickly or respond quickly.

3. At the conference in April, I couldn’t do some things where I had to squat down. I had a problem with my hip, but worked on it for months. During Fall Fest I was able to squat every time I needed to!

5. I finished the match. I didn’t get disqualified or quit because it was too scary or too hard or too competitive.

6. I ran. Well…what amounts to running for me. Remember, I basically quit running when I was nine years old.

7. And finally – I didn’t finish last. While it really wouldn’t have been a big deal because I’m pretty used to it, it tells me that I CAN learn, I CAN improve, even at my age and with my physical abilities.

Joining A Girl & A Gun has seriously changed my life; that is no exaggeration. I’m much more confident and much less fearful. I step up to challenges I would have avoided at all costs before. I went from being afraid of guns, to enjoying them, to moving while shooting, to competing – all things I never thought I would do! I no longer tell myself “never” about anything.

I even have two more flights scheduled over the next year. Make that three – I plan to go back to Fall Fest next year and do even better!