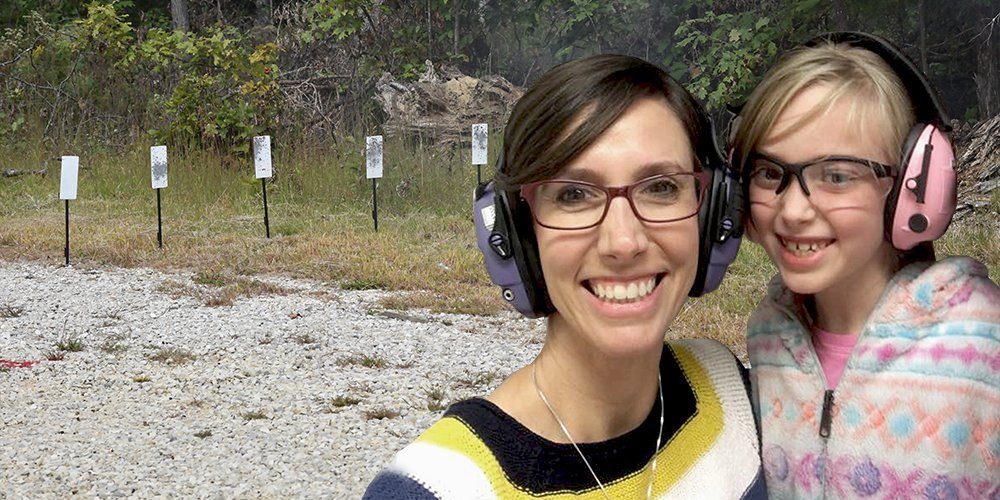 I did not grow up in a house that owned guns or had any interest in hunting or shooting. Occasionally during trips to my uncle’s house, he would let me fire a couple rounds from his hunting rifle. I was not afraid of guns nor did I have anything against them, but it was just something that was not part of my world. My husband, David, grew up hunting and being very comfortable around guns. Throughout our courtship and early in our marriage he occasionally took me to the range to teach me the basics of safety and marksmanship. Surprisingly, I discovered that I enjoyed shooting. I had seen David compete in a 3 Gun match when we were first married, and at the time it looked like something I would be interested in doing myself.

Over the years I talked a lot about wanting to try a shooting match, but I never took the time to look into signing up. With a career and then having children I put my interests on hold until I thought I would have time. After moving to Texas, I saw A Girl & A Gun signs and told David that I wanted to join and get into competitive shooting, but again I didn’t think my needs or wants were a priority over taking kids everywhere they needed to go or setting up those so important playdates. David bought me a membership in 2015 for my Christmas present. It was the best Christmas present a girl could get. Not only did it give me some quality time on the range, it also gave our family something to do together.

I started going to the bi-monthly Breakfast and Bullets on Saturdays and I soon realized that women shooters were an amazing group of people who had a love for teaching each other about safe gun handling and encouraging further exploration of the shooting sports. After going to AG & AG for several months and still talking about wanting to take part in a match David made me bite the bullet and signed us up for our first IDPA match. I won’t lie, after the end of that first stage, the sudden release of nerves, excitement, and suppressed anxiety ended up making me cry a little. After a momentary pep talk from David we were on for the rest of the match. The next several stages were fun and only made better by everyone’s willingness to help guide you to have the best experience possible. I had no illusions of winning, but I accomplished the two goals I set going into the match: being safe and having fun.

The one thing I wish I was told much earlier was to JUST. GO. COMPETE. I knew the technical basics of everything I needed to know in order to compete, but never felt like I was “ready”. If you keep telling yourself that you’ll sign up for a match when you’re ready, you’ll never sign up. Just go do it after you’ve gained a thorough understanding of the firearms safety rules and how to work your gun. Looking back, I wish I had not wasted all that time missing out on the fun and friendship I found once I began going to matches. I thoroughly enjoyed those first IDPA matches, but at the end I just wanted to shoot more. I was hooked.

Shortly after getting into the competitive matches I became pregnant with our third daughter and had to take a break. Unfortunately, she was born with a disorder that took her from us well before her time. Soon after losing her I returned to shooting and had even more of an appreciation for it. Early in our marriage, I asked my husband why he enjoyed going to the range, and his response was that it was his form of meditation. I didn’t understand at the time, but I do now. Shooting, especially competitively, requires clarity of mind, focus, measured breathing, and muscle control much like meditation. During the first year after losing our daughter, shooting was my way of taking a break from all the grief. It became the place I could go and was forced to completely clear my mind of everything and focus on being safe and hitting the targets in the A-zone.

My husband and I decided to spend the next few months trying out each of the different matches in our area. We worked our way through USPSA, Tactical Carbine, Steel Challenge, and All Falling Steel matches all the while toting our kids, Caitlin and Meghan, in the wagon with our range bags and snacks. From the beginning shooting has been a family outing. One of Meghan’s favorite things to do at a match is walk around with her daddy and have him explain the stages and get her opinion on how to shoot different scenarios.

I have since been to AG & AG’s 3-Gun University in Talladega, AL, competed in the Rocky Mountain 300 USPSA match in Fort Collins, CO, and multiple local USPSA, Steel Challenge, and tactical rifle matches. I’m looking forward to my third A Girl & A Gun Conference in Burnet, TX, this spring followed by the fall with Brownell’s Multigun Festival next October. Through the Conference I have met some incredible shooters and taken additional classes from Karl Rehn. My oldest daughter Meghan, who will be turning 9 this March, has even shown interest in shooting. When asked what she thinks about me shooting, she says, “I like going to matches with mommy and I like watching her shoot them to see if she is doing better than the other competitors. I also like that she is one of the only moms shooting.”

When David and I shot our first Steel Challenge we were squaded with two junior shooters that were Meghan’s age. This was what originally piqued her interest in competitive shooting. Once David and I saw how interested she was, we signed her up for a shooting clinic that was held at Best of the West in Liberty Hill, TX. Meghan really enjoyed the clinic because she was able to shoot with other girls her age. She was also able to try shooting a .22 rifle, pistols, and shotguns. She says her favorite thing to shoot is her Browning .22 pistol.

When we originally started competing we hired a babysitter to watch the girls, but we soon realized that a babysitter every couple weekends for almost an entire day was going to get a little pricey. We knew our girls were mature enough, and decided to begin taking them with us to the matches. As daunting of a task as it sounds, logistically its not much different then taking them to the park or any family outing. We searched the Internet for some youth-sized hearing protection, and equipped them with their own “range bag” filled with crayons, toys, and crafts. As our emergency back-up, we did what any parent would do now days and charged up iPads with their favorite games and videos.

The only thing we realized was a must after our first match with the kids was to make sure when we are competing together to have at least one, preferably two, shooters in-between us so one of us can always be focused on the kids and not be getting ready for our turn. Since then the only thing we have added is an inexpensive kids-sized beach style pop-up tent for shade on hot summer days. Initially the girls were content to play with each other or their activities, but as time has gone on they are both showing an increasing interest in the matches. It’s not unusual to now referee arguments on who is going to tape targets.

In August of the this year we moved from Georgetown, TX, to Fayetteville, NC. We plan on taking part in a lot of the 3-Gun and USPSA matches this area offers and hope to find some steel challenge matches as well. Since Meghan took part in the shooting clinic she has expressed interest in shooting in a steel challenge match. As for Caitlin, she may be only three, but you will find her right behind me at every match with her hands up holding her pretend gun and copying mommy as I scout out the stages and develop my game plan before the shooting starts. Although we encourage both our girls to take part in activities they enjoy and not just do something because we like it, we both secretly love that the girls are taking an interest in the competitive shooting world with us.

Dani Durante is a mom, wife, and competitive shooter living in NC.