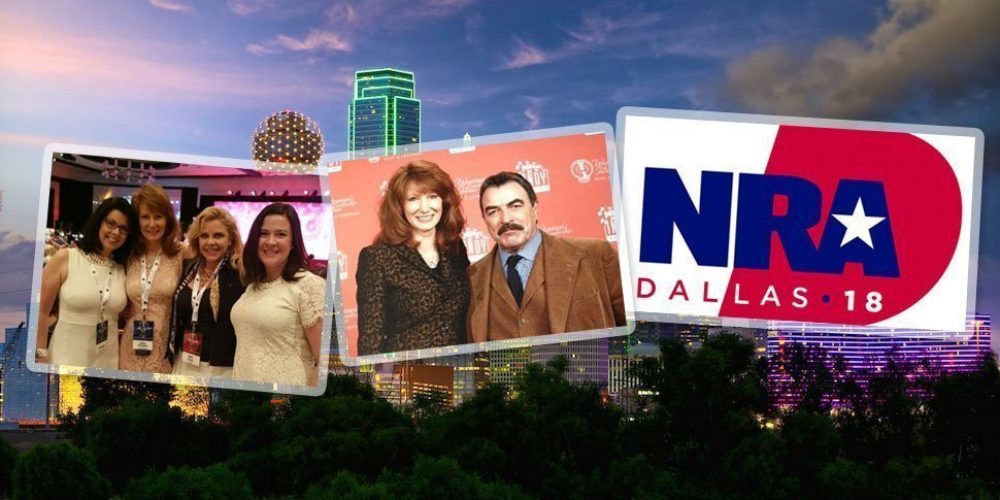 “If you could pick your family, you would pick NRA members,” says Texas NRA Board member, Esther Schneider. “I have made phenomenal friends that I’ll have for life. They’re not complainers. They are polite, respectful, the kind of people you really want to have in your life.” Schneider smiles as she talks about seeing these friends at the upcoming NRA annual meeting being held in Dallas, Texas. With over 15 acres of vendors, as well as speakers and educational forums, it has a lot to offer the estimated 90,000 NRA members who are expected to attend.

When asked what she is looking forward to the most at the NRA annual meeting, she says it is the opportunity to inspire someone with her story. “I tell my story of how I had a guy pull a knife on me when I was right out of college. I had learned to shoot, but that event is what scared me in to carrying. The guy got arrested, but in the meantime I was very fearful. Nothing bad happened to me so I was lucky. A lot of people are not so lucky. But if you can share your story and if someone is thinking about getting a gun and training, and your story propels them to do it, that’s what you want.”

Schneider also wants to impress upon women the fun and social component to shooting. “You can get together with other women and it’s that empowerment of being together, of knowing you can handle that firearm and stop the threat, and also have good time shooting. As an NRA instructor, Schneider likes to tell women, “On the range you can laugh and giggle and cut up, and also be an effective marksman.”

Schneider’s involvement with the NRA all started with a desire to find a sport to do together with her husband. She had been an NRA member before marriage, but was not very active. Her main interest had been showing horses. Her husband tried riding horses but fell off and broke his hip and elbow, so that didn’t work out so well. They thought about golfing together but they lived in Indiana at the time, and the winters made golfing difficult. Then they decided to take sporting clay lessons. And that set everything in motion.

Her instructor introduced her to John Crone, the Indiana NRA field representative, and they hit it off. That led to becoming more involved with the NRA and discovering all the facets of the organization and all the work that needed to be done. That’s when she realized that her talent could be of great service. “I’m a prolific fundraiser,” she laughs. “Most people hate to ask for money, but I’m unapologetic when asking for money for causes I believe in. I won’t ask for things that aren’t important.”

Schneider sits on the “Outreach Committee,” who works with groups such as the Pink Pistols and Black Gun Owners Association to make sure they are kept in the loop.

Schneider’s favorite event at the NRA meeting is the Women’s Leadership Forum Luncheon and Auction which has grown from 80 attendees 12 years ago when it first started, to now over 1,000 women. “Our silent auction usually out raises more money than the ILA [Institute for Legislative Action],” she laughs. Schneider estimates the auction will raise 1.3 to two million dollars this year.

For this years’ luncheon there are many exciting auction prizes, such as a wild turkey hunt in Texas that includes winning a shotgun, a trip to a hunting lodge on a sea island resort, a helicopter hog hunt in Texas, as well as opportunities to bid on various firearms, jewelry, and more.

Funds raised go to the civil rights defense fund that supported cases like the District of Columbia v. Heller and McDonald v. the City of Chicago, those decisions that established the right to self-defense, as well as youth programs like the Eddie Eagle Gunsafe Program. Other programs fund youth hunting and training efforts, the National School Shield program, and more. Refuse to be a Victim helps women learn personal safety, and veterans are served by programs that will take them hunting, getting them back outdoors, and shooting.