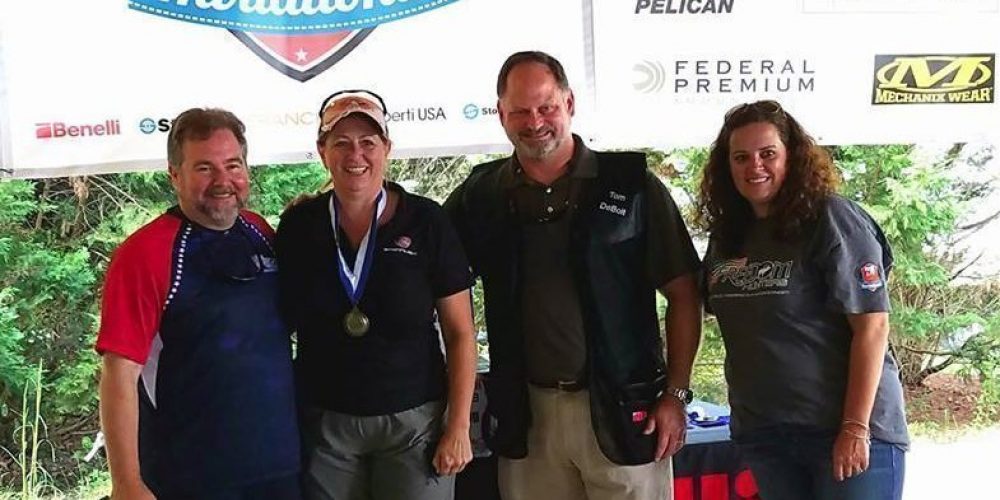 Dorothea Clevenger had bilateral knee surgery only four months ago, but that didn’t stop her from earning High Lady at the Benelli Invitational this week! For the third year, this AG & AG Facilitator (Pocono PA Chapter) participated in the sporting clays competition as a member of the Streamlight Team.

The Benelli Invitational fundraiser shoot raised $55,000 for the Freedom Hunters, a nonprofit organization and Military Outreach program. Freedom Hunters honors and supports all members of the United States Military and their families. Representatives of Benelli, including Dianna & Ryan Muller, and Freedom Hunters were on site to host the large turnout.

In previous years, the Invitational was at Pintail Point in Queenstown, and this year it was moved to accommodate more shooters to the beautiful Prince George’s County Trap & Skeet Center in Glenn Dale, Maryland. The event began with registration and safety brief, and then the shooters went out on the course to their designated starting posts. All the ammo was provided and loaner guns were available for those that did not have their own. There were 18 stations with a great mixture of different types of sporting clay birds. The level of the birds was also a great variety and was the course was amazing.

One shooting station was set up with chances to win a Benelli and tons of accessories. Participants could buy chances and then get tickets for the amount of birds they broke. The event also included a silent auction, raffles, and lots and lots of giveaways. Appetizers were served as shooters waited for everyone to complete the course and while score cards were tallied. A delicious pork roast lunch was served and then the winners were announced.

Dorothea says, “It was an awesome day for a great cause – So grateful for all the opportunities that have been given to me. We take away a lot of really special memories and a prize or two. Can’t wait for next time!!”