Creating a Nation of RifleWOMEN 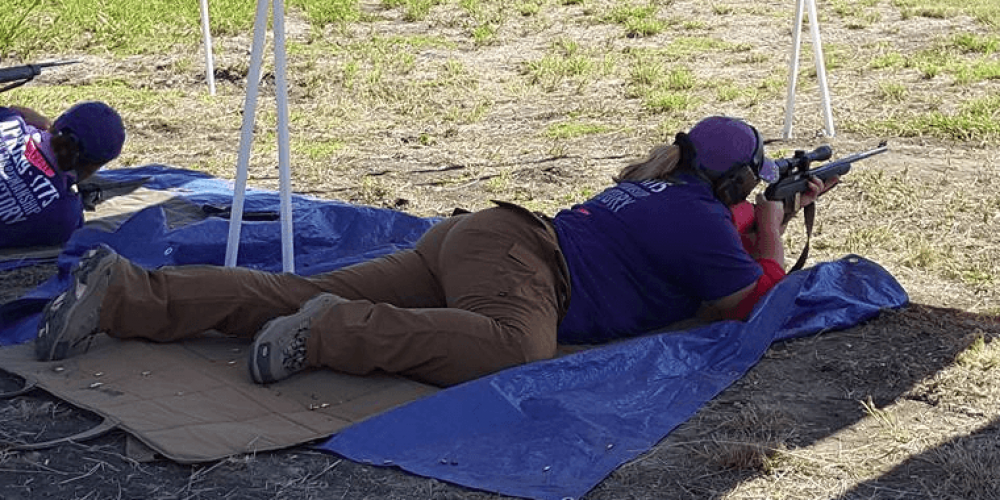 What sport did the founding fathers support for ALL citizens? When did the revolutionary war start? What gave the outnumbered patriots an edge over the accomplished British forces in the Lexington-Concord battles? Name a few heroic revolutionary war women and how they helped win freedom from England? Learn the answers to all these questions and more while throwing lead down range with your favorite rifle. What a fantastic way to spend a late summer weekend.

A dozen ladies from the Austin, New Braunfels, and San Antonio Chapters of A Girl & A Gun came together in south Texas at Lone Star Handgun to attempt to accomplish the prestigious Rifleman badge with Project Appleseed in a Ladyseed two-day class. Project Appleseed assembled a fantastic group of mentors that included a shoot boss, multiple line bosses, instructors, instructors-in-training, and Applecore volunteers, along with the Texas State Coordinator, to teach to basic skills of rifle marksmanship and the rifleman’s role in the United States’ independence from England.

On the first day, the ladies learned to shoot rifles from standing (or offhand), several different sitting/kneeling positions, and prone (lying on your stomach). The shooters engaged “red coats” at simulated 100, 200, 300 and 400 yards from these positions, including transitioning between the positions. This target also has the challenging Morgan’s Shingle which mimics a head shot at 250 yards. The proper use of a two-point sling was taught to help support the rifle during shooting. Natural respiratory pause and natural point of aim were also excellent methods of fine tuning targeting.

In between the tactile learning sequences, the instructors told stories around the Lexington-Concord battles during the revolutionary war intertwining how rifle marksmanship lead to winning our independence. Stories were spun around the ride of Paul Revere and his compatriots from Boston through Lexington to Concord and back to Boston on the 18th and 19th day of April, 1775.

The second day was saved for practicing the skills from the first day in a quest for the title of Rifleman. Using Appleseed Qualification Targets, stages of 10 shots at up to 5 points each from standing, sitting and prone; timed and transitioning between positions; and from 100-400 yards for a score of 210 out of a rare perfect score of 250 was needed to become a Rifleman. Only one in ten first-time Appleseed shooters meets this goal and the New Braunfels facilitator, Bonnie O’Connor, was awarded her patch (she choose the coveted purple patch) for shooting a 219.

Find a Ladyseed class near you to improve your rifle marksmanship and learn a little bit of American history, too.