Come Shoot With Me! Christi Tate Tells How to Invite Other Women to Shoot 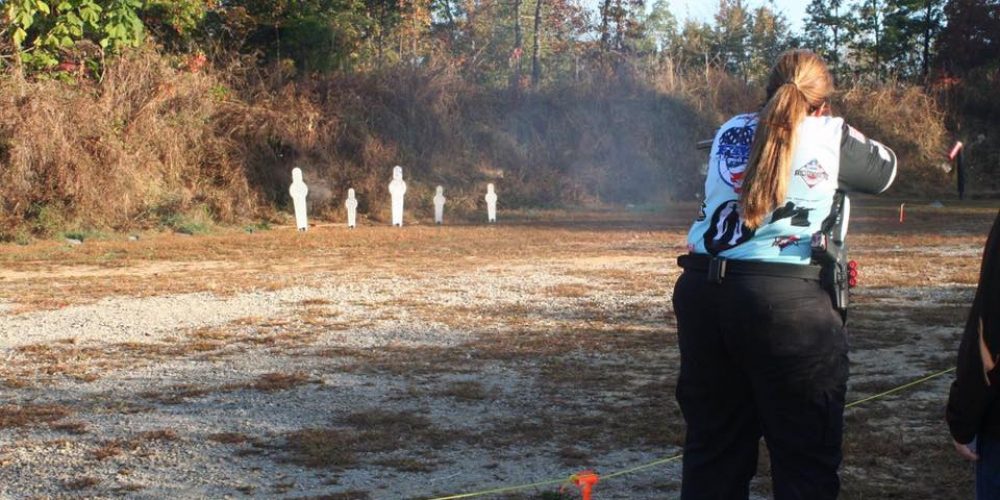 In October, Christi Tate attended the A Girl and A Gun Women’s Shooting League Brownells Multigun Fall Festival. That experience set in motion a tidal wave of fun. “Here’s what happened: We came back from the match it was just awesome. It was tough. But, nobody DQ’d. As we came to the end of it, it was like this was so great, and now we have to wait until next year to shoot together?! So the ladies on my squad started talking.”

“Many of them didn’t have the same opportunities for shooting that I have living in Georgia, near Atlanta,” Christi says. We started talking about getting together at a regular match somewhere on the Ladies of 3Gun Facebook page. I invited the women to shoot with me at the Atlanta 3 Gun match on February 12. I told them I had an RV that they could stay in with me. Let’s see how many ladies’ squads we can make.”

Then things got real. Christi explains, “Chris Palmer, the match director of A3G saw all of this activity, and he called me and asked, “What are you doing?” It turns out a lot of women had responded and wanted to participate. More than 50!  “Chris said he was very excited about it. A3G has always been supportive of lady shooters. I was glad, I don’t want it to be complicated, just simple, show up, shoot, have fun.” With 12-15 people on a squad, they’ll be making quite a few squads.

South River Gun Club is almost perfect for this type of match. It’s close to the airport, easy to pick people up. And it has indoor restrooms, which women really like. And it has a parking lot and campground right there, with electric and water hookups for RVs.

Now it’s getting really fun. “If everybody shows up who is planning to, along with their husbands, we’ll have over 50 people, and 39-40 women.” Of course, there isn’t room for all those people in Christi’s RV. “Its real purpose is the Tiki Bar,” she laughs. “But Chris was able to get discounts for participants at the local Holiday Inn Express. Several women have been conversing and coordinating flying in. Kim Johnson is flying in from Nevada, she is renting a van and will pick three other ladies up at the airport after she gets in. Four women from my Brownells Multigun Fall Fest squad are flying in together. Women are great organizers,” explains Christi. “We figure out how to make it all work. For instance, I’ll be finding gun carts for all the girls flying in. I will be cooking spaghetti, they are shipping ammo to me.”

Christi further explains, “It’ll just be fun, the camaraderie and shooting together again. I wouldn’t know any of these gals if not for the Brownells Fall Fest match. We started getting to know each other on Facebook before we met personally. Now, we have women, most who are members of A Girl & A Gun, coming together from all over to shoot. San Diego, Las Vegas, Missouri, Maryland, Tennessee, Illinois, Wisconsin. Not only is it a very lady-friendly match, I’d say it’s my 3Gun birthday party. It’s my second anniversary of me shooting 3Gun.” Since she began shooting, Christi has participated in more than 50 matches in the past two years. “That includes all of them, even little nightly pistol matches,” she says. She has been so busy competing that she says there has only been one or two weekends that she hasn’t shot.

“There is so much demand all over for 3Gun matches, but here on the east coast we are really lucky that we have so many choices and can shoot a lot. I’m just hours from monthly 3Gun matches, USPSA, rifle, etc. There are probably 10-12 matches a month that a person could participate in. The south and east coordinate really well to make sure they don’t have matches that overlap. A lot of women don’t have the luxury of so many opportunities. So if anyone wants to come and shoot in Atlanta, and I’m shooting, I’ll do whatever I can to help organize. I always offer that. It’s just that this is the first time I’ve had 39-50 people take me up on it!” she laughs.

“I’m a natural born promoter. If I’m doing something fun and can share that, that’s what I’m all about. I can’t be everything to everybody, but I can call the hotel and get a discount. I can call the match director and set it up. I’m having the ammo shipped to my home, I’m fixing a spaghetti dinner on Friday night, and we’ll all have Mexican food on Saturday night. It just takes being creative and getting the people. Why can’t we do this everywhere?”

What do you think? Could you invite and organize a group of women to shoot at your local range?