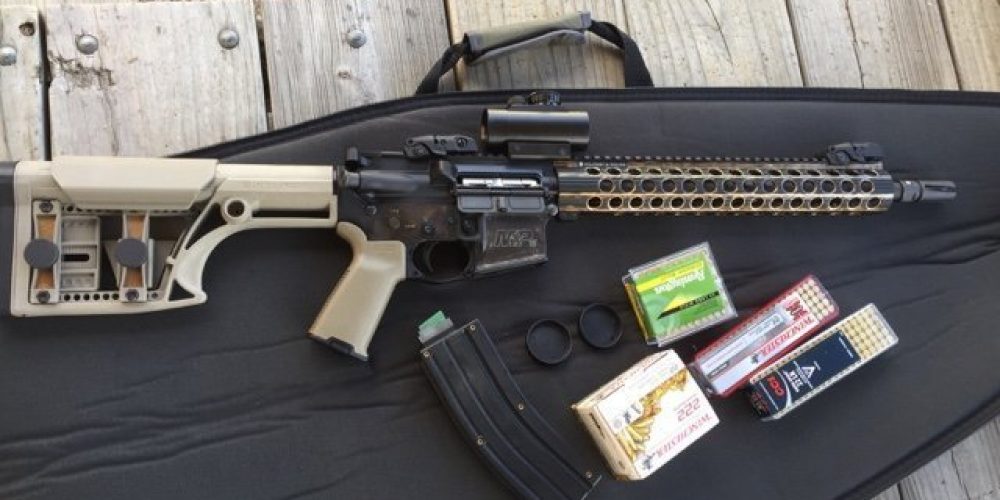 I should preface this post by pointing out that I am by nature a “multi-use” kind of gal. I built as much flexibility into my home as possible – like folding doors to hide kid mess when guests come. I love sofa-beds to pull out when guests come, I also have a handcrafted kitchen “stool” that folds open into an ironing board. I have a day pack that folds down into its own pocket. I appreciate items that are versatile, reversible, reusable, and reliable.

This is a drop-in bolt adapter (no tools or gunsmithing experience needed!!), which comes packaged with a special .22LR magazine designed to fit a standard AR mag well. Being the “multi-use” kind of gal that I described above, I was intrigued by the possibility of being able to expand the uses for my existing AR15 rifles, so I decided to see if CMMG would let me try one out.

The CMMG Conversion kit arrived on my front porch by UPS. The kit is only “gun parts” so I didn’t need an FFL or any kind of “expert/pro” stuff to be able to try it. 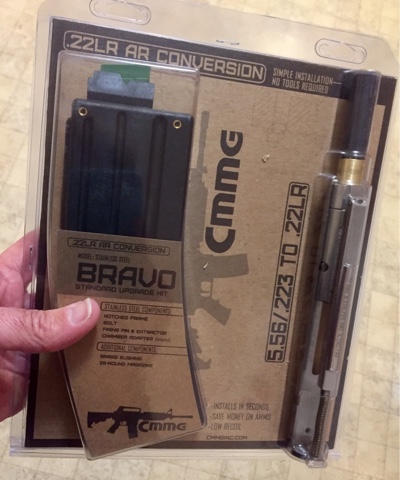 The packaging and directions were pretty self-explanatory. All I did was make sure my AR was relatively clean, lube up the adapter well, pop the rear AR pin, slide out the existing bolt carrier group, slide the adapter in, and close the gun back up. That was it – yes really. 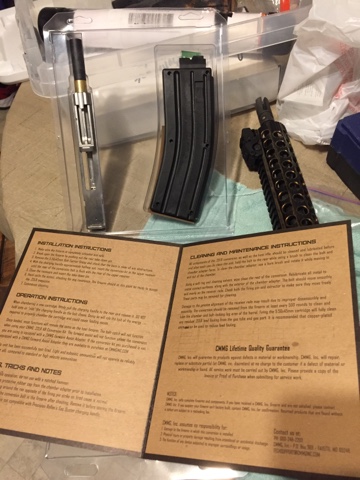 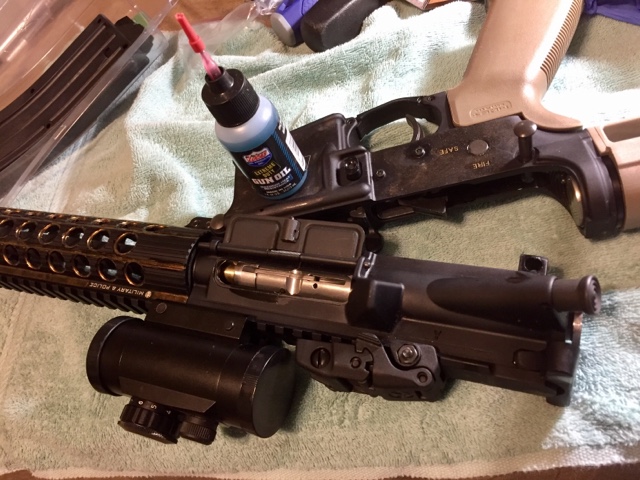 I also needed to find some .22LR Ammo, as I’d never shot this caliber before. Thanks to Greg at Second Amendment Sports and Defense for the help selecting various kinds of ammo to try. For my testing purposes, I ran:

My only criteria for selecting ammo was that (1) I didn’t go with low velocity rounds, as I understand that they don’t cycle the bolt well, and (2) I stuck with plated bullets, as .22LR is inherently “dirty” as it is, and I didn’t want to deal with lead-fouling on top of that.

So with ammo, and my gun with new adapter in hand, I loaded up the car, and headed to the range. I am spoiled, in that my gun club is only 2 miles from my house, and there is rarely anybody there before noon on weekends or during the day on weekdays. I had ALL the ranges to myself to do with as I pleased! 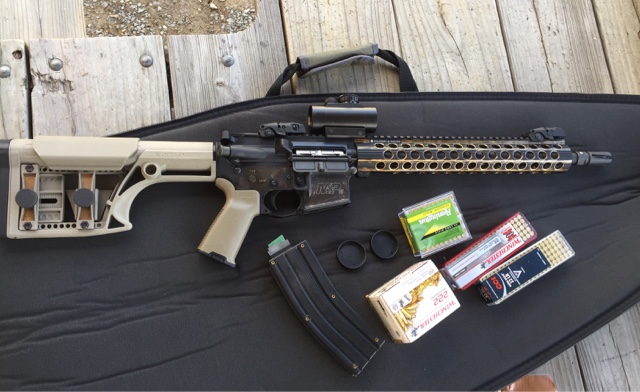 I started with sighting-in the older red dot that I had dug out of storage for this trial. I got my zero on paper at 25 yards, and then started plinking away. The sound of the ringing steel at the 50-yard berm was very satisfying. I was hitting it easily both at the bench and offhand. Then I moved over to the bays and the plate rack. 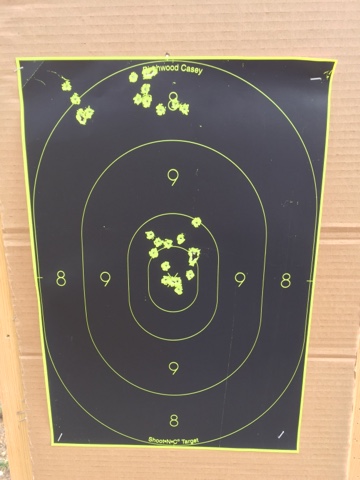 The 25-yard plate rack was giggle-inducing with this set-up. I’m not kidding. Shooting rapid strings on that rack with .22LR was more fun than middle-aged women should be allowed to have all by themselves! I ran that thing over, and over… and over. It didn’t matter what kind of ammo I used either. The CMMG conversion adapter cycled all of my choices equally well. 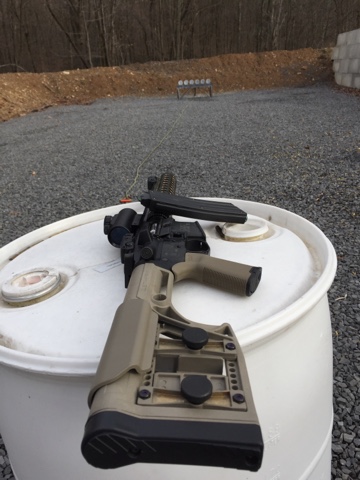 During this first session, the only hang-up I experienced was around the 150 round mark. The adapter bolt itself ran like butter, but the magazine spring started hanging up for some reason. When I got home, I took it apart to clean and inspect it. I didn’t find any spring kinks, or burrs on the follower, so I reassembled it and took it back out the following day for another 75 – 100 rounds. It ran fine then, and has continued running fine ever since. It must have been just a fluke, but I wanted to mention it anyway. 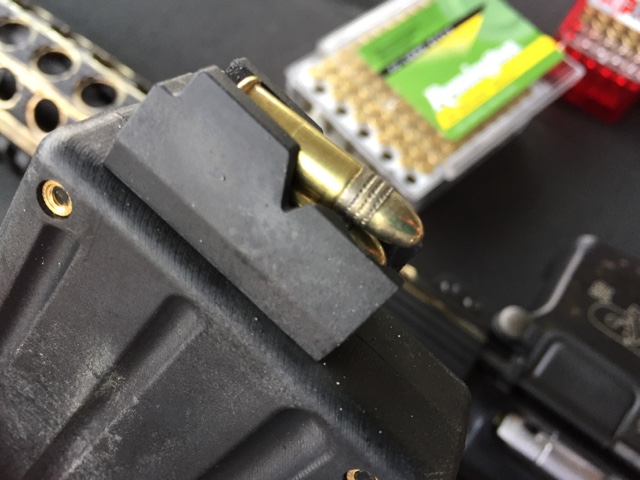 (After the initial hang-up, the magazine ran fine.)

Those were the first and second test sessions. For the third session, I again had the range to myself, so I went “longer” this time. I decided to test the CMMG conversion kit, and my older eyesight, with the non-magnified red dot, on 6-inch hanging steel at the 100-yard berm. This was a little more challenging. Even so, I was still getting good hits. This was a pleasant surprise to me, as I knew that my 1 in 7 twist AR barrel was not ideal for .22LR distance accuracy. I even videoed some of this session. (Gotta love a freestanding iPad.)

Given all of the above, I was completely tickled at the sound of ringing steel at this distance with “only” a conversion kit. 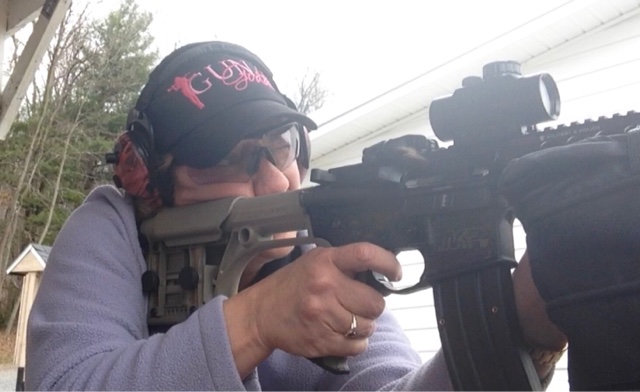 (This video screen shot shows the open CCMG bolt and a smudge of ejected brass.)

Now, a little about the equipment I was using. It is important for me to note that this Smith & Wesson M&P15 was my first “evil black rifle”. I had carefully researched the purchase about six years ago, and used it as my learning tool for the AR platform. This was the gun that I learned to field strip on my living room floor – on an old mattress pad, so I could find all the little pieces. This is the gun that I hit my first 200 yard target with, and learned to shoot 3-Gun with.

The gun has sentimental value – we were bonded, she and I. But she had been hanging around as a neglected safe-orphan ever since I won another rifle, tricked out specifically for 3-Gun, in a raffle a couple years ago. I had started to revamp her a little last year with a prize-table stock, and new trigger, but she was still kind of superfluous, and looking for a “purpose”.

This clever little CMMG adapter has allowed me to give new life to my old AR friend. She isn’t a safe-orphan anymore. She is now a ridiculously fun little plinker, which will get much more use in monthly steel matches than the other gun does in thrice yearly 3-Gun. And shooting .22LR in club Steel/Rimfire Challenge is a lot more affordable than shooting 5.56 in 3-Gun. If I wanted to I could even swap the adapter over to my 3-Gun rifle for some cheaper practice, and then swap it back for Rimfire Challenge.

The Tru-Glo red dot sight which I mounted, was given to me “used” by a friend a few years ago, for use on a deer rifle. But once I discovered that my older eyes really needed a scope for those distances, the red dot began also sitting around, neglected, in my safe. Now it too has found new plinking life! For me the red dot is the perfect optic for the short distance, rapid target acquisition that I need with steel matches.

The best part with all of this is that I didn’t have to buy a whole new gun! The CMMG conversion kit gave me good accuracy at the distances I was interested in – 25 to 50 yards. Even using an unmagnified red dot with older eyes, it was quite acceptable out to 100 yards – with my pretty standard AR set-up – even though my barrel twist rate is 1 in 7″. Usual barrel twist for .22LR is 1 in 16″.

In the future, if I should decide that I want a more accurate, dedicated .22LR upper for say – varmints, then CMMG makes all of the parts necessary to complete my conversion to the .22LR dark side. I was told by a design engineer at SHOT, that the adapter bolt can, with the easy tweak of removing the chamber adapter, be used as a dedicated bolt for a dedicated .22LR upper, with just the addition of barrel collar, and a CMMG .22LR barrel. They even sell the collar and barrel together as a set for this very purpose!

That sounds quite economical to me, as I STILL wouldn’t have to buy a whole new gun! (Not, that I don’t LIKE buying guns, but sometimes a piecemeal approach is a little more budget-friendly, and many gals shoot within a tight budget.) To top it off, CMMG provides a lifetime quality guarantee.

I think this set-up would be perfect for a variety of women (and men too, of course), such as:

-Recoil-sensitive women (or even juniors) who might be interested in getting started in rifle shooting, but who are reluctant to make an investment in an entire firearm until they are sure they are comfortable. These women would be able to drop the CMMG .22LR conversion kit into a friend’s or spouse’s AR15, in order to get a feel for the platform in a lighter-recoil setting.

-Budget-minded women who already own an AR- style rifle, but who want to practice “on the cheap.” .22LR ammo is much less expensive for practice than .223/5.56. The unit would pay for itself after only a few sessions of practice, while allowing such women to reinforce habits with their own familiar rifle.

-Practical women (such as myself) who want to expand our horizons into other areas of competition (such as Rimfire Challenge), but still squeeze as much use as possible out of the guns we already own.

Overall, I am extremely pleased with this little conversion kit.
The bolt adapter itself had zero issues, right out of the box. It ran flawlessly through hundreds of rounds – from sighting in the red dot optic, to ringing 50-yard, and then 100-yard steel, to rapid strings on the 25-yard plate rack.
I LOVE this CMMG conversion kit. It’s a keeper!

Now I just need to go buy some more magazines, so I can shoot a club steel match next month! 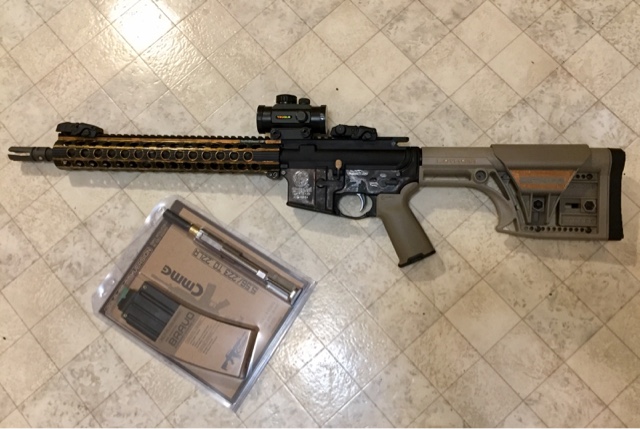