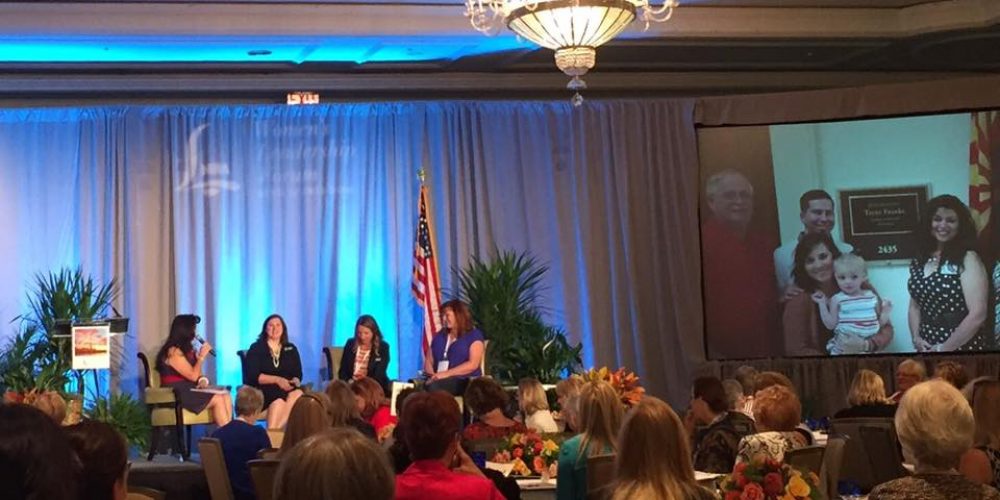 Do you ever wish you could just have a civil political discussion with people? That you could just discuss the issues logically, learn what an initiative really means? Leave out the emotion and just focus on facts so that you can make your own decision? Cheryl Todd of Gun Freedom Radio realized that many people want to do just that, and that is how Gun Freedom Radio began.

Cheryl and her husband, Dan own AZFirearms – “Pronounced ‘A’, ‘Z’, not short for Arizona,” she corrects me, as well as Pot of Gold Estate Auctions. “Both businesses share a building but are completely separate entities,” Cheryl explains. “One is an estate auction where we consign high end estate items like guns, coins, jewelry, boats, etc. AZFirearms is a mom-and-pop retail gun shop with guns and ammo.”

Cheryl grew up around guns. She was the only girl with three brothers and a single dad. “They had guns, went hunting. I was the camp cook. We always had loaded guns around. Dad showed us how they operate. We thought of them as tools, we didn’t play around with them just like you wouldn’t play around with a chainsaw. I understand how guns work but that is not my strong point. That’s where Dan comes in. I’m HR and more the policy end of things. I understand the politics and issues, that’s what I bring to our radio show. Dan knows the equipment because has spent his life buying and selling guns, and he’s our gunsmith, so he can answer a lot of the questions people email in.”

Politics has not always been an interest for Cheryl. “We live in Arizona, we’ve always been registered Republicans. But we didn’t sit around and talk about politics or debate things or get into the issues until owning a gun store. Now we have to care, because especially over the last seven and a half years it feels like every other day some new law is being passed or proposed that could affect or does affect our livelihood. We’ve got to keep up to date.”

Cheryl’s degree is in psychology, so “Language use is in my wheelhouse. I understand words and tone, and the meaning behind words in order to communicate well in that realm. I can listen to the media and hear what they bring out as important key words and know it means something, there’s a reason behind them choosing the phrases you hear.”

She admits, “Before I was so tuned in to how politics works, those things just kind of washed over me. But they were affecting me in a way that I wasn’t aware of. Now I read more carefully. When I hear politicians pick up a similar phraseology now, my ears perk up. I’ll look for a letter next to a name, that little “R” or “D” for Republican or Democrat, and realize what they’re saying is not a shock.”

“Listening more carefully and engaging in critical thinking helps me then to make sense of the world to myself. Then, when my daughter was old enough to vote for first time, she and some of her friends asked if they could sit down with us to talk about what the different ballot measures meant. We weren’t really political before but we always had family discussions. Our daughter could disagree with us but no discussion was over until she backed up her thinking. She got to where she could argue very persuasively,” laughs Cheryl. “She knew she had that power to make up her own mind. Yet she took the time to ask what we thought, which my husband and I considered an honor for us.”

“In our discussions we explain our thoughts, use Google and other tools to help us explain where we’re coming from. We never said, ‘We’re going to vote this way, or This is how you should vote’ It was an eye opening experience and made me wish more people had that opportunity, that they had somewhere they could go to discuss things in an open manner. I wish more people wanted that. We go to the little ‘G’ god of media and sit and say, ‘What way do you say we should vote?’ Now they flat out tell you. It used to be inferred via negative ads, but now it’s very obvious which news network is ‘backing’ which candidate.”

“So now people just show up to vote, they haven’t done their research. They’ve just heard enough blurbs or seen memes, and think, ‘Yeah, I heard that name a lot. Her husband was president, I’ll pick her’ and that’s the end of their research.”

So Cheryl and Dan decided to start a show on a local radio station. Dan talked about guns and Cheryl talked about policy. They began to realize the show wasn’t going quite the direction they wanted it to go, so they went to 960AM, The Patriot station. “That was kind of like coming home because they are all about conservative values and topics and hosts. We were kind of preaching to the choir, but we still gave listeners a new way to think about things.”

“It was wonderful but had a limited audience. AM only reaches so far. We started realizing that the web is where everything is moving. So we’ve been a web-based radio program for a year now.” You can find the recordings of all of our shows on demand at Gun Freedom Radio.

“I love making the relationships and connections, letting people know they are safe to discuss gun-related topics coming on our show and talking with us – some media outlets are less than honest and friendly towards the topic of firearms. It’s been wonderful with some of the big name nationwide celebrities. You think you might catch an ego here and there, but not at all, not in any sense. Kenn Blanchard, ‘Black Man with a Gun’ was my first interview. Being a brand new show I didn’t have a record for him to check to know my show was safe but he took the chance. I finally got to meet him at Shot Show and thank him in person for the trust he showed me. He’s a pastor and I’ll never forget what he told me – ‘Spirit recognizes spirit’.”

“We’re also trying to appeal to people who haven’t figured out yet or decided yet how they feel about guns. People think, ‘I hear politicians tell me how evil and bad guns are but then I everyday we rely on First Responders to protect us with guns.’ It’s weird how powerful the anti-gun message seems to be, but I think it’s smoke and mirrors. I think there are a lot of people who know it’s an inanimate object. I don’t think people are as fooled as the gun control crowd thinks.”

“I wrote a blog about these people who by day are liberal Democrats but come in [to the store] understanding the need for self-protection. But they are unable to share that part of themselves with their carpool or with PTA friends. It’s the new closeted part of someone’s life. God forbid they should want to go hunting. I think people who identify as socially liberal Democrats have a hard time figuring out how to fit that into their lives. I think it’s so unfortunate that the freedom has been taken away from them while the rest of us just get to enjoy our Second Amendment Rights.”

“I’m pretty much a single issue voter right now. We only have one Second Amendment and the attack on it right now is at a fever pitch. This is where I believe my voting energies need to be at this time. As long as someone is standing strong on guns that is the hill I stand on.”