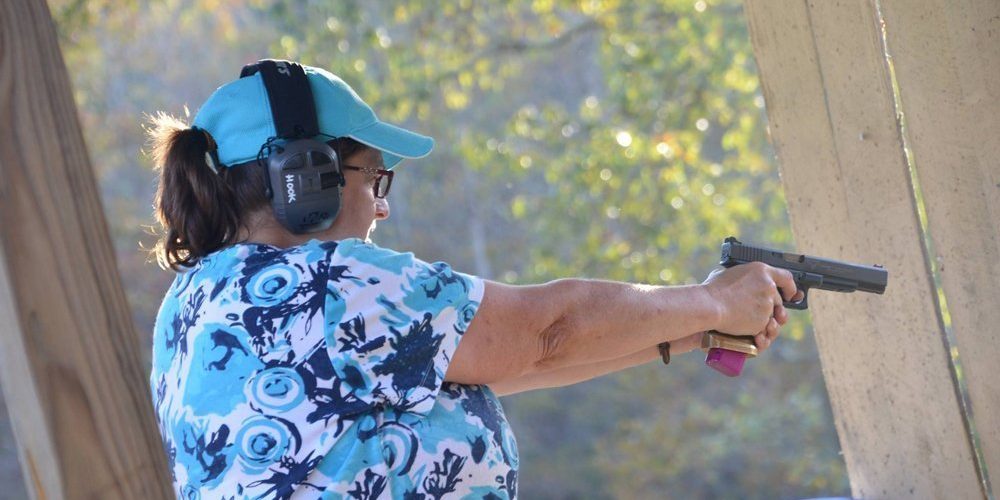 Eloise Vogel had barely handled a rifle or shotgun until three weeks before A Girl and A Gun Women’s Shooting League (AG & AG)’s Brownells Multigun Fall Fest in October. But it turns out she is the mother of World Champion pro-shooter, Robert Vogel, and friends with pro-shooter, Jessica Hook. Jessica talked to Eloise about competing in Fall Fest. “She told me, ‘I think you can do this. It’s a competition for women, they really want to draw in new shooters. They want to teach women how to do it and have a good time. You can do this’,” laughs Eloise. Jessica had planted the seed.

“I had shot my son’s Glock and Jessica’s Glock, I have a revolver and I carry and have my concealed carry permit. I had shot clays a few times. But I had never shot that shotgun or rifle.” Preparing for the match she had a lot to learn in a short time. “I didn’t really understand the workings of the guns. I wanted to know that when a shotgun goes completely empty that the little thing is going to be frozen, now what do I do?” she laughs. “To jump into 3 Gun and have to know how they work and what they do when they don’t work, that’s a big chunk of memory.”

“Jessica pretty much gave me the very basics like how to hold them, I didn’t know anything. She was very good at instructing me. We went out to the range and she made up some easy things to shoot at. She really went over the 180 rule, making sure I knew how to keep the muzzle pointed in a safe direction,” explains Eloise.

So, accompanied and mentored by Jessica, Eloise dove right in. “I felt confident going because Jess made sure I was in her squad and that she would be with me all the way. I had read on the Facebook group that only ROs and the squad mom could instruct me. I knew that Jess would be there. I just thought this would be fun but I was still a little nervous because I was still at the stage where guns didn’t scare me but the power of them was still a bit intimidating at times yet.”

Eloise tells her thoughts about the match. “A few things were different that I expected. I thought we would shoot all three guns at every stage. I was surprised that one was just rifle. I did get overwhelmed, I think because it was the first one. I had a big lump in my throat when my gun jammed. I thought, ‘Just throw me out of this stage!’ I didn’t want to cause any trouble or make anyone mad. But they said, ‘No, you can redo it.’ They didn’t make me feel bad or like a loser.”

“It was also a lot more walking than I expected. But I was so proud of myself for that, I only walk 5,000-6,000 steps a day, and we had went the day before and walked through everything. I was worn out,” she laughs.

“I did not expect the women to be nearly as encouraging as they were. They were so uplifting! There were women who were fit and you knew they love the sport. There were other women just like me. We were all on the same plane, out here to shoot guns and have fun. I was very happy with the coaching. They made me feel so good, they were there to talk me through and tell me ‘You missed that, watch that.’ On the last stage on the hill, I was really nervous. I was worried about running across to the Bronco, I was worried about getting in it. When I asked if I could go in through the back, I was told, “Honey, you can get in that truck any way you want’,” she laughs.

“When it was over, I started crying. I think it was the release of this is the last stage and I actually did this, I actually finished all eight stages. I kept telling myself, ‘I am not going to complain about my feet.’ The whole time I was concentrating on not saying anything about it.”

“It was very physically demanding on me because I’m not fit. It would have been easier if it had been more fit. But I had a great time, I really enjoyed myself except for physical limitations. Everyone was great.”

“The thing I learned the most about self is that I can do more than I thought I could do. I’m stronger than I thought I ever was. I’m very proud of myself for stepping up to something major. If you would have told me a few years ago that I would be shooting an AR or a shotgun I would have told you that you were nuts,” she laughs. “I’m proud of experiencing something new that not a lot of people are able to do or choose to do.”

“I think AG & AG organization is a wonderful avenue for all ranges of experience of women who have shot. They are so excited, you can see the excitement in the members. They are so happy that you take an interest in the sports that guns can offer. I can see it’s a passion to keep guns in the public eye and show that they are a tool to do a certain activity and in this case it’s 3 Gun matches. It’s a great sport, very enjoyable, and a great family activity. I noticed the young girls with their families there to support them and thought how fantastic that is that they can do this together.”

“AG & AG really does encourage women. If anyone is ever afraid to try shooting or if they have gotten into some group and haven’t felt comfortable, keep trying and find one that fits you. It’s worth it to know you can pick up something that once scared you and know that you learned how to use it and use it safely and it’s not scary anymore.”