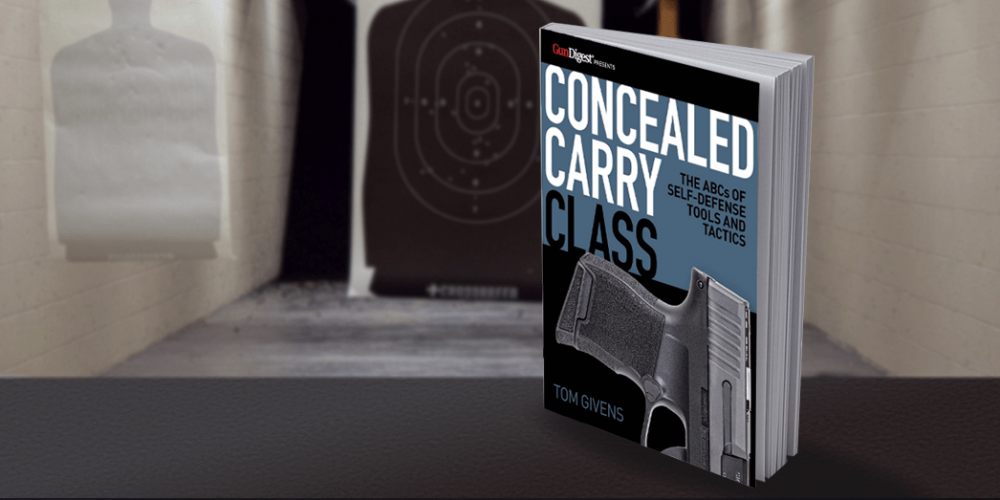 Concealed Carry Class: The ABCs of Self -Defense Tool and Tactics by Tom Givens

Tom Givens has been teaching since 1975, has owned and operated his own firing range for 18 years, (after completing a 25-year career in Law enforcement and specialized security work) where he oversaw the firing of about 1.5 million handgun rounds a year. During that time, he trained about 2,500 students per year, from private citizens to police officers to special forces detachments. He also travels all over the United States and in Europe teaching. If you get the chance to walk, drive, or fly to a class he is teaching, I encourage you to do so.

I was fortunate enough to take his Rangemaster Instructor Development course in June 2020 and hands down one of the best classes I have ever taken. It was not an easy class, so if you take it be ready to work hard, and know how to shoot before you come out, this is not a “show up and get the certificate” type of class, you will have to earn it. On day one you will receive a 200+ page workbook to read and utilize during your 3-day class (homework!) there will be 2 shooting qualifications, and one written. You must pass all three at a 90% or better to earn the certificate.

He holds a master rating in three IDPA divisions. He has an expert witness in numerous court cases and accepted as an expert in multiple state courts. He is also an accomplished author, this book is his fifth published textbook on the subject, and he has written more than 100 magazine articles in SWAT magazine, Combat Handguns, and multiple other publications. I would say he knows a thing or two.

It was surprising to find out that the number one cause of on-the-job deaths is homicide, and that one out of every six on the job deaths is homicide. Some other stats Tom includes: every year in the US there are about 15,000 reported murders, but because this figure does not include homicides not reported, and or people who have just vanished without a trace, the actual number is thought to be closer to 30,000 to 40,000 persons a year. Did you know that according to the National Missing and Unidentified Persons database more that 600,000 persons of all ages go missing every year?

According to the U.S. Department of Justice, almost 6 million people a year are victims of some violent crime. According to the report you have a 1-in 49 chance of being the victim of a violent crime in a single year. You have the most basic human or civil right, the right to self-defense. You have a right to be alive, and to live without being killed, crippled or raped by a sociopath.

He talks about software and hardware books for instance and some excellent recommendations along with brief descriptions of books you should have in your library, I am working on building a great reference library with many of these books and more.

Next, he goes into Jeff Cooper’s color codes, he was fortunate enough to train with Jeff Cooper, a U.S. Marine, who was the creator of the “Modern Technique” of gunfighting, and an expert on use and history of small arms. Many of us as firearms instructors walk in the footsteps of giants like him, and of course like Tom Givens. I love how Tom talks about being in condition “Yellow” when you leave your home and the analogy of a naval ship using radar, you are not at war with anyone today, you don’t expect to be attacked but there is a possibility, so you have your radar on making a continuous sweep of the area, suddenly there is a blip on the screen. You cannot tell if it’s a good thing or a bad thing and you ask a fighter plane to intercept. If it’s a friendly he will wave at it, if it’s a threat he will shoot it down. That’s the same process you go through on the ground, turn on your radar, and let it sweep the area for potential hazards. The book then goes through each color code and what you should be looking for and doing at each level.

Tom says, ”By learning to observe your environment, constantly evaluate it, and react appropriately to what you see, you can achieve a large degree of control over your fate.”  I so agree with that, the best fight is the one you never get into, by being more aware of potential problems early on, from further away, you have more time and options of dealing with that possible threat. He also talks about a “sliding scale of readiness,” going from a state of being oblivious and unprepared to a condition of being ready instantly to do lethal violence if forced.

One of my biggest takeaways that I share with my students that Tom shared in his Rangemaster Instructor Development course and this book is while in process of being attacked often many people get stuck wasting time in the “Why” (why is this person attacking me, why would anyone want to hurt me?).  It doesn’t matter why, there are people that walk amongst us that are not like us, predators that have no issue with killing you for maybe some drug money, they are not normal rational people. They just don’t care about what they do to you. The “why“ doesn’t matter, if you decide to act it should be an immediate, positive, aggressive, and defensive action.

He talks about if you find yourself faced with a life-threatening attack you will be faced with three difficulties, they are: Recognizing the threat.  Realizing that man right there, for reasons you don’t understand is about to kill you if you don’t stop him.  Overcoming your reluctance to use lethal force against a fellow human being.  He goes into detail on each one as well as the color codes and he adds a really sobering thought.

Each morning when you put on your gun, remind yourself, “I might have to use my gun today.”

I have that thought every morning as I get ready for my day, and it really puts my mind right, I hope the day never comes, but I have done my best to prepare and continue to refine my mindset, skills and gear to not only survive but prevail in a fight for my life, or in defense of a loved one.

He has an excellent and real talk about fear, and what to do to control and overcome it step by step. I love how he says: Courage under fire is not a matter of being without fear. It is a matter of being able to control fear and accomplish your mission, which is to stay alive. Only fools are fearless.

The section on second crime scene is valuable, understanding why a bad guy would want you in a more remote, or private location where he can do what he wants at his own leisurely pace, and why you want to fight to avoid going to that location at all costs.

In the awareness games and self-training section he talks about how the single most important element in your survival is a cultivation of your awareness skills, even more important than your marksmanship skills. This is a learned behavior and like most skills it is learned by repetition. He gives some great advice on ways you can be aware of your environment and be in charge of it, instead of not knowing who is around and what they are doing. He tells a story about stopping in a BBQ place to have lunch with his wife, and how being aware of their surroundings and prepared to act stopped a possible violent encounter, and how it was scary that afterwards only they had noticed what had happened, not the staff or the customers, no one even noticed the man had a gun. This is the way unfortunately many of the people around us go about their day.

Tips on dealing with the mentally disturbed was very valuable, how to identify them, and how to react and deal with them, and recognize the signs that a potential attacker is evaluating you. Are they watching you? Ask yourself why? Is he coming up with a plan to get closer, distract you, the best course of action is distance and to politely refuse any request, or questions such as “do you have the time, or change”?

Dealing with the aftermath of a shooting, is something that many people that carry a gun don’t consider. There is a whole section on this, Tom says you should have three priorities: Stay alive, stay out of jail, stay out of the poorhouse. What should you do immediately after, do you stay there? What do you say to law enforcement? He covers this. By the way did you know that 40% of all robberies happen at the door of a car, and a person is getting in and out of it, often in their own driveway. What’s your plan for that? Do you have legal counsel you can call, that specialize in self defense?

What about the psychological toll of a person forced to shoot someone in self-defense? What are some things that you may go through? Auditory exclusion, tunnel vision, time distortion, depth perception, blocked memory, dissociation (a feeling of stepping outside your body and serving as a detached witness to events rather than as a participant) are all possibilities.

There is a chapter on sidearm selection, requirements, holster design and recommendations, calibers and ammunition, and “stopping power”. What type of gun should I buy, what caliber, and how do I carry it? He talks about this and even talks about back up guns and some considerations on what type and how to carry them.

There are chapters on realistic, relevant practice, tactics, as well as continuing education and practice live fire drills for you. From how to draw from the holster while carrying concealed, to the type of clothing, to what should you be practicing on the range? Tom says with the simple scenarios you should concentrate on in practice, your goal is always to get solid center hits, but as quickly as possible. And identify your areas of weakness, so you can concentrate effort in areas where it is most needed.

Honestly, I could just go on and on about this book and the contents, but just buy it, buy a few, give them to someone you love, you may just save their life. If it seems like I am passionate about this book, its because I am, this is a great read with a ton of valuable information, and I highly recommend it.

I recommend that you read Concealed Carry Class: The ABCs of Self-Defense Tools if you carry a gun for self-defense and would like to be more informed as to the many aspects involved with doing so, whether you are just getting started or have been carrying for years, there is much to learn and consider, and this book should be part of your library to guide you on that path. This book is filled with so much content, data, and great information. It’s a book you want on your shelf to be able to pull down and read again and again, and you will always get something more out of it each time you do so.

For more information on Tom Givens, his book, classes, his team, and even a Ladies perspective written by his lovely wife, Lynn, who instructs with him, go to Rangemaster – Self-defense and firearms training for the real world.

Alexandra Nikolov is a firearms instructor in Las Vegas NV for Low Pro Consulting, LLC | Your Firearm Education Headquarters (lowprolv.com) as well as a facilitator for A Girl & A Gun, A Girl & A Gun Women’s Shooting League ⋆ Gun Safety Training (agirlandagun.org).