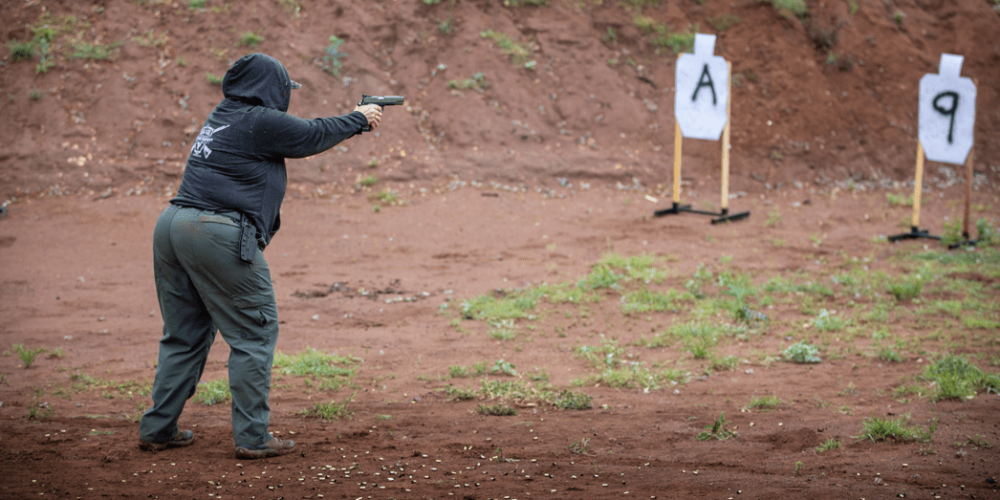 An attacker with a knife or blunt weapon can close the distance on a victim from 21 feet away in just 1.5 seconds.

Sgt. Dennis Tueller published these findings in SWAT Magazine in 1983 with scientific evidence that an assailant within seven yards had an advantage over an officer who still had his firearm holstered. Tueller labeled the “reactionary gap” as the time it took for an individual to recognize a threat, make the decision to employ a firearm, and use the firearm in self defense. His work emphasized the importance of taking proactive measures to identify a threat, create distance, utilize obstacles, and present on target from the holster more quickly — in less than 1.5 seconds to be exact.

Tueller’s concept has been used to help officers and responsibly armed citizens close the reactionary gap. A challenge for responsibly armed citizens is to effectively employ a firearm before the threat can close the distance and use an impact weapon. By understanding the time that an attacker could cover in 21 feet, a defender could train to increase distance, use obstacles, and/or employ a firearm faster. This knowledge can also help a defender articulate the use of lethal force against an attacker, who was still a few feet away.

At the 9th Annual A Girl & A Gun National Conference, RISE 2021, instructor Morgan Ballis of Defensive Tactics and Firearms led 48 women through exercises to test Dennis Tueller’s research on the human response time. He set out to test the ability of A Girl & A Gun members to cover 21 feet so that they could relate this information to potential threats. By understanding their own abilities and limitations, the women could determine their own minimum safe distance if faced with a hostile threat. In addition, the women would learn their ability to effectively employ a handgun from a holster while taking into account how quickly a potential threat can reasonably cover an estimated distance. This knowledge would allow them to better articulate their actions if their decisions during a self-defense encounter were ever called into question.

To begin, Ballis gathered some information about participants’ height and weight, recorded their run times, and conducted an initial course of fire. Then the women started with their firearms holstered and their hands in any position, other than on their firearm before firing two shots at a target three yards away upon an audible start from a shot timer. They recorded their results and repeated the drill with the trainer adding in additional distractions. Participants recorded their own times for personal knowledge comparing the two recorded firing times. The times of individuals or the group were not recorded as part of the data set; however, every participant improved from their original times with the exception of two participants.

The participants’ times to get 2 hits on target from the holster ranged from 1.8 to 3 seconds. Their average time to run 21 feet ranged from 1.75 seconds to 4.18 seconds with an average time of 2.71 seconds. This data suggests that an adversary of equal physical ability to the participants, armed with an impact weapon, and at a distance of 21 feet, would likely be directly on top of participants before they could employ their firearms from concealment. The data also suggests that an assailant representative of Tueller’s original study — in other words, an average male in decent physical condition — would attack the majority of women before they could effectively present their firearms from concealment.

Although participants successfully got 2 hits on target, the overwhelming majority of participants were open-carrying their firearms using outside-the-waistband and strong-side holsters when conducting the firing exercises, and not all holster types or positions were consistent. Additionally, because most participants said they typically conceal carry their firearms using inside-the-waistband holsters, it is reasonable to assume that their time to get 2 hits on target would take longer than the 1.8 seconds to 3 seconds they recorded during this exercise.

Here’s the takeaway: If you know that you have a subsecond draw and accurate shots on target in less than 1.5 seconds, then 21 feet is a reasonable perimeter for you. However, if you’re an average A Girl & A Gun member with hits from concealment taking up to 3 (or more) seconds, the application of the Tueller concept tested at RISE 2021 indicates that you should establish a minimum safe distance at 30 feet (10 yards) to 60 feet (20 yards). Based on your individual skillset, any aggressor within 30 to 60 feet of you could be considered a clear threat.

The Tueller exercise reinforces the need to train to decrease the time it takes to successfully present a firearm on target from concealment. In addition, practice reasonable proactive measures, based on the totality of the circumstances, to help you employ your firearm faster. For example, consider posturing, obtaining a grip on your firearm in the holster, or even covering the threat with your firearm before an attacker can close the distance. Use lateral movements and obstacles to create distance and increase the time available to employ your firearm to stop a threat. Knowing and utilizing these proven strategies will help you close the reactionary gap and successfully defend yourself against an attacker.