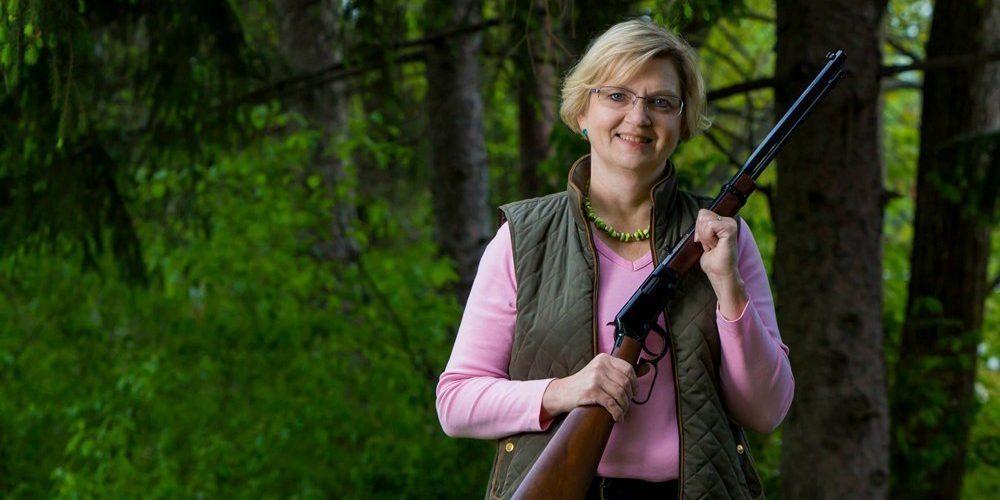 “I was taught to shoot by my dad. I stopped when I got married and got busy. I finally took it up again in 2004 around the time I was 40,” explains Amanda Suffecool. Then she went full bore on it. “I’m kind of wired for it,” she laughs. “I’m an all-in sort of girl.”

However, she explains that it started as a slow transition. She is an engineer by trade and was working at a plant that restructured. “I was without a job for the first time since I was 16,” she says. While talking about it with her brother, Rob Campbell, he said if he could do any job he wanted it would be opening a business that teaches all about concealed carry. “I told him there was no money in that. So I created a business plan to prove it to him. Except when I got done, I said, ‘Oh, this does make sense.’ So we opened a school with eight trainers teaching concealed carry. Then we opened a gun shop. Then we were asked to talk on the radio as ‘experts’ and did monthly one-hour talk shows. We’re now doing five hours a week,” she laughs.

“The radio show [Eye on the Target Radio] is very unisex,” Amanda explains. We don’t talk down to anyone or use jargon. We cover the basics. We try to respond to the level of the question. A lot of times we’ll talk about the backstory of the question. The caller will say they already know that, but we want to make sure we cover the information for those who may not already know it.”

“A lot of women will call and say, ‘I started listening to your show, then I got my husband listening, then my kids.’ It’s nice to be able to call from the comfort of your own home, you don’t feel silly or stupid asking questions. Most of the time the question from a woman is that someone told them there is a specific gun that they need to buy. So we tell them guns are like opinions, everyone has one. So then we talk about what they want it for, what they’ll be doing, even their body type. We talk about the advantages of each type, revolver or semi-auto. This can all affect what might work for them. We talk about what to look for when going to a gun shop. I always say it’s easier to first eliminate the ones you know you don’t like. Then write down the ones that you think you do like. Then do more research. Start finding out which ones your friends own and see if you can try them.”

“We also get a lot of questions about concealed carry. We’ll be having another fashion show on February 19. Two years ago we had one and recorded it on DVD. We then sent copies out to around 200 women’s groups. Our goal is all about education. Women think that when they start carrying they have a neon sign saying, ‘Look at me! I’m carrying!’ So we want to dispel that feeling. We want to show what’s easy and what’s convenient. And we were real. We have models in their 20’s all the way to seniors, from around size 8 up to size 22, what real women are. We wanted to show how concealed carry works for everyone, for every body type. That’s our reality.”

Suffecool and her brother also teach firearm safety to teens. “Usually the parents drag their kids in, but we make it interactive and fun. I’m willing to poke fun at myself in the interest of humor and safety,” laughs Suffecool. They will also work one-on-one teaching younger kids about safety. She also explains how they work with organizations on whatever topic the want. “We worked with churches where we offer three tracks – a non-violent track, less than lethal, and then fully lethal, whatever their preference is.”

Suffecool has recently been named to the advisory board of Ohio Gun Owners for Trump. “Isn’t that cool?” she says. In Ohio there is a structure where someone is designated in each county who supports Trump on the 2nd Amendment and outdoor sportsmen. “But you can’t have 88 people deciding what to do or say, so the board helps field questions and decisions working backwards with the Trump Campaign for a unified message,” she explains. Suffecool is the radio personality who talks about Trump’s stand on the 2nd Amendment. “I know his platform, so if a radio station wants to talk to someone about it, they call the state Trump representative who puts them in contact with me and I do the interview.”

Suffecool is also working on a book. “In my spare time,” she laughs. It’s all about the Ruger .357, which was manufactured from 1955-1973 without any major production design change. Her book will contain every manufacturing variation and change. “My father was a collector and this was his dream,” explains Suffecool. “I’m about 60% of the way through it. It will be a tribute to my pop.”

Suffecool lets us in on some of her favorites. The gun she prefers to shoot is a Para Ordnance .45 “with a fabulous LBA trigger,” she smiles. “This year is my year to try something new,” she says. She and her brother closed down their gun shop and were discussing what to do next. They decided to start shooting USPSA and to attend the national match at Camp Perry. She uses her Para Ordnance in USPSA but several people advised her to get a different gun. “But right now I just want to learn all the moves and skills before changing guns. I’ll never be a winner,” she laughs, “But it’s great fun.”

Her favorite carry gun is the Ruger LCP. “For some reason I’m on a colored gun kick. I have LCP in raspberry. At Shot Show I saw a Walther PK .380 in Cheetah print and said, ‘I think I need that.’ Then I saw the Walther P22 in Lemon/Lime. While it’s not great for marksman shooting it’s great for teaching,” she explains.

Suffecool truly enjoys educating others. “As an engineer, I get how things work. Once I figure that out, I can present it different ways. And then I tell women, ‘Don’t be afraid. Give it your best. Be safe and build your skills. That’s all there is to it.”