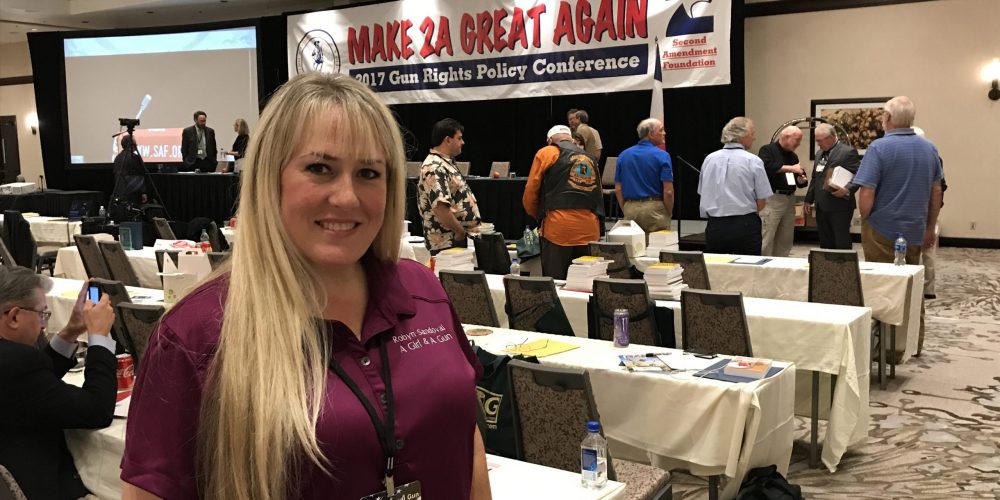 A Girl & A Gun Executive Director Robyn Sandoval recently spoke to 800 attendees at the Gun Rights Policy Conference. Here is the transcript of her speech:

Seven years ago, A Girl & A Gun was founded with the mission to get women off the sidelines of their lives. At the time, there were few women at shooting ranges and competitive matches, or if they were there, they were normally watching their husbands from the sidelines.

We would ask women if they would use lethal force to defend themselves. “Well… I dunno. I don’t think I could…” Then we would ask what if someone threatened their child? “Absolutely! Hell yes!” So we remind them that they are valuable to their families. Just like on a plane, you have to put your oxygen mask on first, these mothers are eager to be empowered.

Sometimes women are hesitant to put themselves first or do something on their own. You are worth defending. We give them permission to invest in quality firearms and good gear. We tell them you are worth the investment and give yourself time at the range.

Over the past weeks, my phone was ringing off the hook because of the impact of Hurricanes Harvey and Irma. Many women were feeling panic and vulnerability — gas stations were out of gas, electrical grids were down, 911 systems were overburdened, and there was a palpable fear in cities like Houston.

It was meaningful work for me to welcome women to the mindset where they were ready to be their own first responders. They called us for guidance and advice because of the work we do. For example, one of our members was home alone, with no power, in a neighborhood that was mostly evacuated. She loaded her shotgun by candlelight and stood ready with the training and mindset to protect her home (children), if necessary.

Our motto at A Girl & A Gun is It’s More Than Shooting because we see the empowerment from women’s confidence on the shooting range translate into so many areas of their lives. One of my favorite stories was about a woman who came to one of our events in 2014. She was past a devastating divorce and her self-esteem was at an all-time low. At our event, she was introduced to natural terrain 3gun stages, and although she had never shot a shotgun before, she found out she was really good at it. When she returned home, she took her Girl Scout troop bowling. In the past, she had sat on the sidelines, too afraid to stand up and bowl in front of everyone. But now she was different. She wrote us and said that because of the confidence she had found at our event, she discovered, she was a pretty good bowler, too!

She went on to create the first approved shooting-related merit badge program for Girl Scouts in the state of Colorado. We didn’t just change her life; she trained others, and more importantly she educated and empowered the next generation.

We’ve seen a dramatic rise in female gun ownership and participation. We focus on making an equitable rise in training.

Our chapters are the heartbeat of our organization. We offer casual, unintimidating, nonjudgmental events at 143 ranges throughout the country. Every night of the week there is a Girls Night Out happening somewhere in the USA.

We also layer the local training with national training and competition events. Every April we host our National Conference with nearly 400 women and 3 days of training. We offer classes on self-defense, home defense, competition, legal issues, and marksmanship. The “ever-student mindset” keeps our members engaged in long-term participation.

We are also the presenting sponsor of the DC Project to help highlight the right to keep and bear arms as a woman’s issue.

We also send out weekly training emails to our members. And we have unique programs, such as our Shooting Journal and MasterMind program with a professional performance coach to give women the intel and resources they need to set goals, test metrics, and overcome obstacles in all areas of their lives.

So what’s in it for you: a room full of men who have probably been gun owners your whole lives? Well, if she wants her own gun, you get to buy more guns and that’s always a good thing!

Ultimately, we are creating more informed and empowered women, families, and communities.

If you want to support our efforts, you can learn more at AGirlandAGun.org. Thank you.