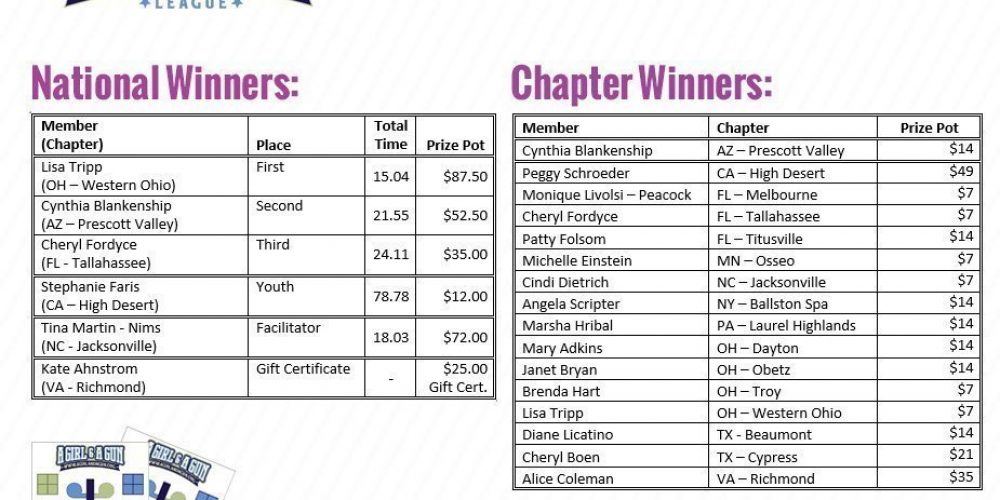 AUSTIN, TX — A Girl & A Gun (AG & AG) Women’s Shooting League proudly announces the winners of the 4th Quarter 2017 League Match. This quarter’s course of fire included 18 rounds total at an AG & AG Match Target #2. This was a Limited Vickers match with no more than 6 rounds per string. Shooters began at a low ready with finger outside of the trigger guard using centerfire pistols with no scopes or laser sights. Shots were fired in this order:

Lisa Tripp of Western, OH, was the first place winner with a score of 15.04. Cynthia Blankenship of the Prescott Valley, AZ, chapter came in second place with a score of 21.55. Cheryl Fordyce from Tallahassee, FL, placed third with a score of 24.11. The Youth Member winner was Stephanie Faris of High Desert, CA, with a score of 78.78 and Facilitator Tina Martin-Nims of Jacksonville, NC won her division with a score of 18.03. Kate Ahnstrom of Richmond, VA is the winner of the Gift Certificate which is awarded on a random draw of participants.