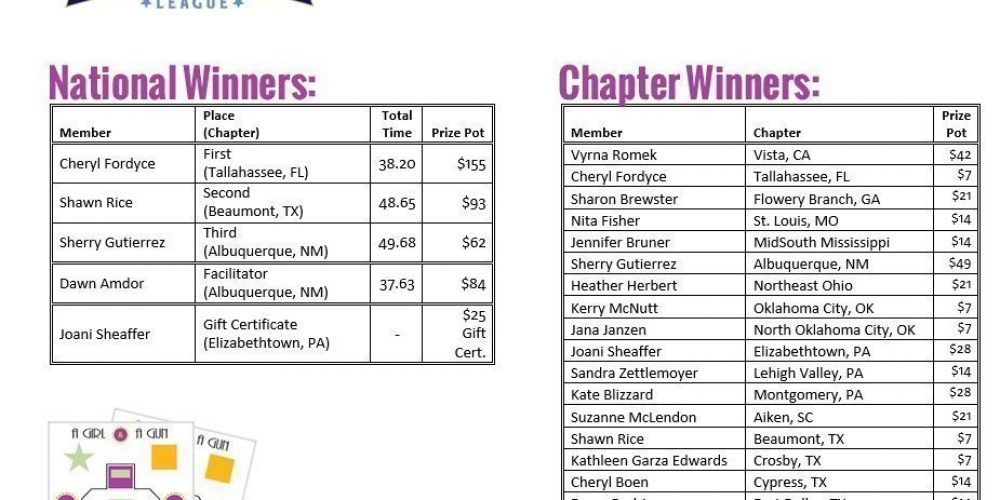 A Girl & A Gun Women’s Shooting League is excited to announce the winners of the 2nd Quarter 2015 League Match. This quarter’s course of fire included at least 12 rounds total at an AG & AG match target at 21 feet (7 yards). Shooters began at a low ready with finger outside of the trigger guard. Shots were fired in this order:

The top chapter competitor was Cheryl Fordyce from Tallahassee, Florida, who had a time of 38.2 seconds. Dawn Amdor from Albuquerque, New Mexico, won our facilitator category with a score of 37.63 and had the top overall time. The nationwide average time was over 92 seconds and no one finished the course without any penalties.

Registrations included 69 shooters from 23 chapters. Based on the number of women participating in the match, the chapter pots received $434. The national pot was allocated $310 with $155 going to first place, $93 going to second, and $62 going to third. The facilitator pot was $84. One $25 gift card to the AG & AG store was awarded to a random participant — selected Joani Sheaffer from our Elizabethtown, Pennsylvania chapter.